The crisis in Eastern Cape Education cannot be overcome without sustained national intervention, and Minimum Norms and Standards for School Infrastructure

The school year in the Eastern Cape began with multiple crises. The public and media are invited to join members of Equal Education’s grade 11 and grade 12 Khayelitsha youth groups who will be setting up a school classroom, with desks and chairs, outside Parliament on Thursday 17 February. The picketing and vigil will include the following: 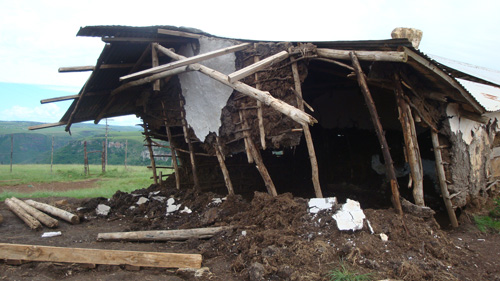 Why are we picketing Parliament?

A strong national response is critical.

Section 100 of the Constitution allows for the national Department of Basic Education to take over the administration of a provincial department if that department cannot fulfill its obligation. Minister Angie Motshekga has visited and assessed the problems first hand, but resolving the crises will require her direct and ongoing leadership.

The national Department of Basic Education must fulfill its constitutional responsibility by stepping in and resolving the ECDoE crisis:

Equal Education leaders will give a first-hand eye-witness report based on their recent visit to the Eastern Cape mud-schools, and there will be a photographic display.

Website: www.equaleducation.org.za
Twitter: http://twitter.com/equal_education
Facebook: http://www.facebook.com/pages/Equal-Education/168404366515126
– Political art made of mud to remind our Parliamentarians of the conditions in hundreds of schools.
– Speakers who are coming from No-ofisi Senior Primary School near Bulungula in the Eastern Cape. They are travelling especially for the picket. Come and support them.
– Poetry, songs, and presentations by members of Equal Education.
Carla GoldsteinCRISIS IN EASTERN CAPE EDUCATION EE PICKET AT PARLIAMENT – 17 FEBRUARY 201102.21.2011