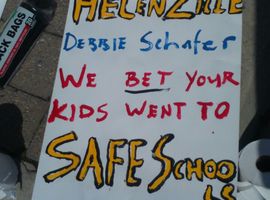 More than two months after over 2000 EE members handed over the findings of our social audit into school safety and sanitation to the Western Cape Education Department (WCED), Equal Education (EE) members have still not received a response from the WCED. This morning, around 80 learners elected to represent their schools held a peaceful protest outside the home of Western Cape Education MEC Debbie Schafer.

These learners, who sit on EE’s Western Cape Leadership Committee, resolved on Tuesday to take MEC Schafer directly to task for the lack of response from her officials to the audit findings, and for the arrogance with which she has dismissed the months of work that learners, parents and community members put into the social audit [see press statement]

EE has gone to great lengths to ensure that the WCED has the data needed to ensure that the safety crisis in Western Cape schools is urgently and adequately addressed. Their lack of response and the MEC’s dishonesty in dealing with us is shameful.

MEC Schafer has refused to take responsibility for the failure of her district directors to respond to the findings brought forward by EE members – they initially agreed to respond within two weeks. The MEC has also falsely claimed that we only handed over hard copy audit forms filled with “vague allegations” – the findings were handed to her district directors in the presence of more than 200 people.

MEC Schafer has thus far refused to instruct her district directors to communicate the date on which they will respond to the findings, and has even said that she has not seen the findings and will not respond until they are brought directly to her. This morning, Equalisers took the social audit findings directly to her door.

Despite claiming to never have seen the findings of the audit she has implied that they are false, and that 914 learners from 244 of the schools she is responsible for have simply lied about the trauma they suffer in and en route to school.

The impact that issues of safety have on a young person’s capacity to learn, and on a teacher’s capacity to educate, is unquestionable. Yet, for more than two months, our emails to the WCED have been ignored, and we have received no requests for meetings or any engagement on the facts of the audit. To name a few of these, out of the 244 schools audited:

–              16% of schools have had instances of sexual assault in the last year (we believe that this issue in particular is significantly underreported, even in our audit).

The EE Western Cape Leadership Committee, which consists of elected representatives from over 50 schools, took the collective decision that EE members should picket the MEC’s home early this morning (Thursday).

The MEC is capable of ignoring and disrespecting the experiences of Equalisers who attend ill-equipped schools because she is a wealthy public servant who has never had to watch her children suffer the education offered to poor and working-class black learners in South Africa. EE members will not be deterred for as long as she continues to hide from what learners face every day.

This morning we had intended to give the same information handed to the district directors, to MEC Schafer, but she refused to leave her home to acknowledge the learners. Instead she tweeted insults at them from behind the high walls of her suburban home.

This will not discourage us. We AGAIN demand that the WCED:

1.       Analyse the data we have collected on safety and violence in schools in the province;  and

We will continue to highlight the plight of violence-ridden schools, while the MEC does all she can to ignore learners’ concerns. In certain instances she is even handing the responsibility of improving poor and working class schools to private service providers.

We want our schools to be safe environments, conducive to learning, and we urge all teachers and parents to support us in fixing the education system by standing side-by-side with us.