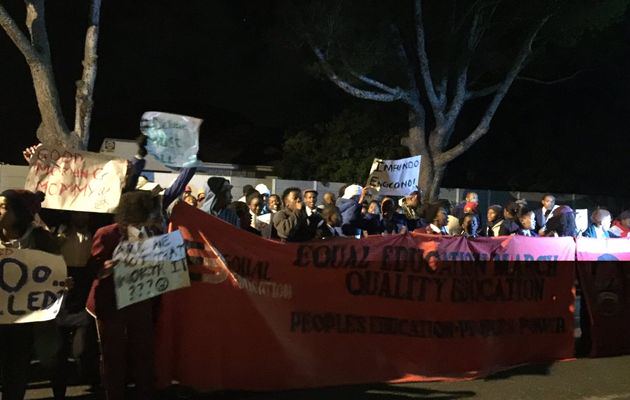 On Thursday last week, 80 students and activists turned up at Western Cape Education MEC Debbie Schäfer’s home to protest the state of school safety in the province.

They wanted to draw attention to an audit they had conducted.

Schäfer was clearly angered that the protest took place at her home.

In video footage that did the rounds on social media, Schäfer walked hurriedly past the singing crowd gathered on her driveway.

She did not look their way, despite the fact that learners are her core constituency.

Accompanied by her teenage daughters, the MEC simply made a beeline for her car. The crowd was kept back by police and bodyguards as Schäfer got into her luxury vehicle and slammed the door.

It was a remarkable moment. The woman tasked with planning the educational futures of millions of black learners didn’t seem to know what to do when confronted with people who were expressing their opinions and advocating for their rights.

To justify her actions, Schäfer took to Twitter to scoff. She suggested her problem was that the activists had “crossed a line” by showing up at her house.

Indicating she saw the protest as a threat, Schäfer said she would “not allow a dangerous precedent to be set that people can feel entitled to march illegally to my home”.

DA leader Mmusi Maimane backed up Schäfer’s concerns by tweeting: “I find these actions outrageous and dangerous. Whatever the issue‚ marching to some1 house is wrong and dangerous.”

In doing this, Maimane blew yet another opportunity to demonstrate his commitment to racial justice. The party leader has pledged to root out racism in the DA.

He has had furious outbursts, telling the country a number of stories of racism that have personally wounded him.

Yet he and the emerging racially conscious black leaders in the party seem helpless in the face of the sort of classist racism that leaked out of the Western Cape last week.

There was silence from the black DA caucus as senior white leaders in their party showed contempt and disrespect to a group of socially active young people.

None of the leading members of the DA, of any race, saw it as a problem that Helen Zille, Maimane and Schäfer resorted to stereotypes and called bright and passionate activists “dangerous” and “illegal”.

Protesting at the homes of public officials is a regular occurrence in South Africa. In black communities, ANC officials regularly receive protesters at their homes.

Many of the protests aren’t as friendly or as peaceful as the one Schäfer had to endure.

Still, the MEC seemed especially concerned about her privacy, and about the disruption to what would have otherwise been an orderly morning.

As I read her indignant comments, I wondered what sort of public official prizes her desire for a quiet morning and a nice slice of toast over the rights of learners who want the same sorts of protection?

Maimane’s defence of his colleague was unfortunate. At a time when South Africa desperately needs moral leadership, the head of the official opposition is incapable of seeing panicked white entitlement for what it is.

Maimane will have to learn not to pander to the politics of entitlement that is so rife within the DA. Whether or not that is possible remains to be seen.

In response to the protest, Zille insisted that school safety was not a matter for the education department. She blamed the lack of safety on “absent fathers” and “youth delinquents”.

Zille has a history of making racially charged and irresponsible statements, and then denying that she harbours racist views.

In many ways, the DA’s racial politics and the failure of the Western Cape government to respond to structural inequality raise questions about the party’s ability to lead all South Africans, rather than just the privileged and entitled.

It is concerning that when problems emerge in other provinces, Zille is quick to diagnose the problem as ANC incompetence, but when similar problems are pointed out in the Western Cape, she quickly lays blame squarely at the door of black parents and working-class communities.

I want to give the MEC the benefit of the doubt and accept that she was genuinely alarmed by the presence of a group of peaceful protesters at her home.

Still, after some initial surprise, I would have hoped her humanity would kick in considering that her daughters were home that morning.

Imagine how much they would have learnt if their mother had opened the door with a bright smile.

Imagine what her children would have learnt if their mother had invited the protesters in from the cold.

African homes have a way of expanding when guests are ushered in.

Imagine if the MEC had listened with grace and humility and the respect of a servant leader.

The learners might have left feeling that they were citizens rather than burdens, as though they were the future rather than remnants of the past the MEC wishes she could bury.

Nelson Mandela was an avowed ANC member, yet the DA has repeatedly attempted to claim him in death.

I imagine that if they had acted differently last week, the old man might have afforded them greater respect.