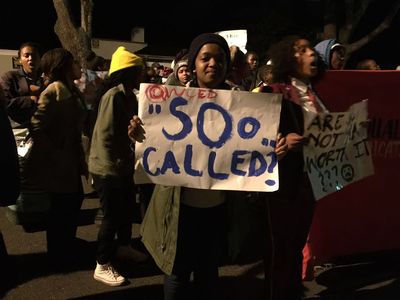 One of the places this violence occurs is in schools. These are supposed to be safe spaces where young minds can wander between geography and history, get lost in literature, and find the concentration to master mathematical concepts. But many are dangerous, which is why Equal Education’s campaign for safer schools is important.

As I understand it the campaign began with a social audit of 244 Western Cape schools, which found that only half of schools have a fence that can protect learners and just 47 percent employ a security guard. It found that corporal punishment occurs in 83 percent of schools and that learners have experienced or witnessed a violent event at 89 percent of schools. Although the Western Cape ranks among the worst of provinces when it comes to school violence, this work has national relevance.

I was moved to write in support of this campaign while on Twitter, as I watched what I thought was a rather unfair attack on EE by Western Cape Premier Helen Zille. Her primary criticism of EE is that, in her view, it resorts to “grandstanding” and “has done nothing about the core problems in education”. This is called playing the man and not the ball. The Premier refused to engage about what her government could do about school safety.

According to Premier Zille the “biggest challenges facing education” are “unaccountable and absent SADTU (SA Democratic Teachers’ Union) educators” and “absent fathers”. Later she said she would only “regain respect for EE when they campaign for teachers and pupils to be present, punctual and prepared.”

Her allegations run totally contrary to my personal experience of interacting with EE members and leaders, attending their offices and campaigns, and reading their materials.

A few years ago I was invited by EE to join the launch of its “No To Late-Coming Campaign”. Early in the morning I stood with equalisers outside the gates of their schools handing out pamphlets which explained how much time is lost in classrooms due to late-coming and absenteeism. The campaign was by pupils for pupils, but it was obvious that teachers felt the heat too. This campaign has been repeated and yet it is exactly what Zille accuses EE of not doing.

As General Secretary of COSATU, I addressed EE’s national congress in 2012. I came under pressure from certain leaders in SADTU not to get too close. In fact my working relationship with civil society, of which EE is a major constituent, was one of the reasons I was ousted unconstitutionally from COSATU.

EE has always been clear that it supports the right of teachers to unionise and bargain collectively. During teacher strikes it has strongly supported wage demands. It has refused to swallow the idea that teachers are solely to blame for our education crisis, because EE has seen the conditions teachers work under. In many schools there is a positive relationship between EE learners and SADTU teachers, with EE parents serving on school governing bodies.

Why did some comrades in SADTU’s leadership resist my support for EE? Because the union crosses swords with EE in dozens of schools, where equaliser organising confronts underprepared teachers, principals using corporal punishment, and weak school administration and leadership. This is the primary terrain where meaningful contestation with the bad features of SADTU needs to happen, and EE is the movement taking up the challenge.

EE was consistent in calling for the release of the so-called “Jobs For Cash” report into the buying and selling of principal posts, the publication of which was strongly resisted by SADTU. EE went so far as to say: “The notion that we are just dealing with bad apples is not credible — this is a systemic rot in which SADTU must accept its share of responsibility.”

The most disturbing was Premier Zille blaming “absent fathers” and “delinquent youngsters” for the situation in our schools. It is absolutely true that we have far too many absent fathers, some who must be taken to task. But social problems occur within social conditions, which are deeply marked by race and class oppression. Hundreds of thousands of black fathers are absent because they are away from home working in mines, factories and on farms. This stems from a migrant labour system into which African people were forced by expropriation of our land and punitive taxes.

Soon after the Marikana massacre, former president Kgalema Motlanthe pleaded for the abolition of the migrant labour system, calling it an underlying social determinant in which “workers were separated from their families and loved ones for 12 months at a time and only went home at the end of the year for a week or two.” He said the migrant labour system had dire consequences for women and children. One of the consequences he pointed to was broken families. We can’t speak about “absent fathers” without speaking about migrant labour and structural injustice. I encourage the Premier to speak to these issues.

In any case, Zille has rightly criticized the Eastern Cape government for its failing education system. Consistency requires accepting responsibility in the Western Cape.

I remember visiting the EE head office in Khayelitsha. There I saw a new generation of activists building community, conducting research, and carrying forward non-racialism and a tradition of militant struggle. They seemed to approach their tasks with the utmost seriousness. The label of grandstanders doesn’t stick.

Following them over the past eight years I have noticed how they have avoided litigation and unnecessary clashes when possible, keeping their eye on the ball. The leaders of EE are not too well known. It is the organization itself that is known in the townships and villages of South Africa. It has been built without personality cults. In fact it is an example of what can be achieved.

Safer schools are non-negotiable. Lets reckon with what EE’s members are saying and mobilise a collective effort.

Zwelinzima Vavi is the former General Secretary of COSATU and Convener of independent and democratic unions.