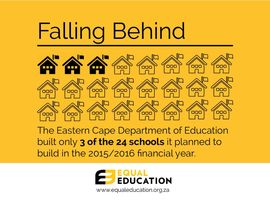 Equal Education is astounded that the Eastern Cape Department of Education – by its own admission – has built a total of three of a planned 24 schools in the 2015/2016 financial year.

This information, detailed in the latest Estimates of Provincial Revenue and Expenditure released last month, reveals the shocking pace of implementation of the Norms and Standards for School Infrastructure.

Aside from the feeble 12.5% completion rate based on the department’s own targets, the Estimates of Provincial Revenue and Expenditure report reveals that there are currently only three additional schools currently under construction.

The report shares targets for schools that were planned to have water, sanitation, and electricity provided, yet no information on the actual numbers of schools provided with these services is published. This is simply unacceptable. Given the under-performance in school construction, we are very concerned that the department has not come close to reaching its targets for water, sanitation, and electricity as well.

It is now all but confirmed that the Eastern Cape Department of Education will stand in violation of the law’s first deadline this year.

Nationally, the school infrastructure crisis continues to run deep through the education system. The latest National Education Infrastructure Management System (NEIMS) data released in June 2016 notes that 9 203 schools still have pit toilets, 3 492 have no or unreliable electricity, and 5 175 have no or an unreliable water supply.

The infrastructure crisis is particularly bad in rural provinces. Approximately 31% of all schools with no water supply are located in the Eastern Cape, as well as 91% of those with no sanitation facilities.

Building Infrastructure Capacity in the ECDOE
Despite the department’s claims that they do not have sufficient funds to fulfill the law’s requirements, a staggering R530 million from the Education Infrastructure Grant was unspent last year.

Equal Education is very encouraged that these posts were finally filled at the end of last year. We hope that this will both greatly increase the capacity and output of the department this year, as well as improve the transparency of the department.

While Equal Education applauds the efforts of the national department’s infrastructure programme, the Accelerated School Infrastructure Delivery Initiative (ASIDI) has too has been plagued by under-performance and under expenditure since its inception in 2011.

As a result, not only has the DBE therefore fallen far short of its targets for school infrastructure in the Eastern Cape, but it has also failed to properly build technical capacity in the Eastern Cape under the Section 100 takeover.

Barriers to Implementation
Equal Education understands that there are a number of severe challenges facing the Eastern Cape Department of Education. These include but are not limited to:

· Not enough contractors who are experienced in rural areas

· Challenges integrating infrastructure planning with school rationalisation programmes, such as the cancellation of infrastructure upgrades for schools that are scheduled to be closed even though the schools remain operating for years

As civil society, we appreciate the difficulties in addressing the infrastructure backlog, and understand the size and scope of the school infrastructure crisis that the ECDOE inherited. However, these must not be seen or used as excuses for under-performance, but rather as for justification for additional support, whether from the DBE or Public Works.

Moving Forward
Given the extent of the remaining school infrastructure backlogs, Equal Education will continue to demand transparency to ensure that this year’s pace of implementation drastically improves over last year’s appalling performance.

We call upon the department to disseminate regular progress reports to the public, as well as MEC Makupula to share his annual implementation reports and plans.

These tools are vitally necessary for the ongoing monitoring of school infrastructure delivery to ensure that the safety of Eastern Cape learners, and their education, is no longer compromised.