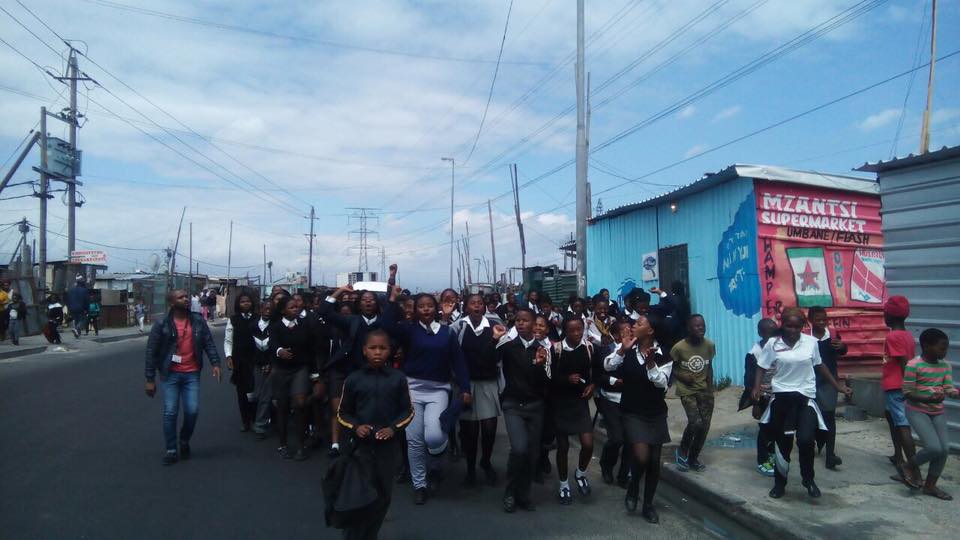 Throughout Friday, Western Cape learners led strikes in their schools in protest against the Western Cape Government’s (WCG) failure to respond to major crises in school safety, sanitation and infrastructure in general.

The WCG has also failed to respond seriously and timeously to masses of learners who have been raising these issues in the most rigorous and disciplined manner possible since April this year. These issues have been raised with three different MECs and the Premier herself; none have yet provided a serious or sincere response, and learners have had enough. Strikes have taken place in 30-35 schools in Khayelitsha, Strand, Kraaifontein, Langa, Nyanga, Mowbray, Salt River and Walmer Estate.

On April 26, over two thousand learner members of EE handed over the school safety findings of an audit of 244 Western Cape schools to senior Western Cape Education Department (WCED) officials. The audit found evidence of a major crisis, in which 50% of schools have no access control over their premises, learners and teachers feel unsafe in class, corporal punishment is present in 83% of schools, and rape and sexual assault take place in school and to/from school.

Despite numerous phone calls, emails and meetings with the WCED, official recognition of the issues has not been accompanied by a serious commitment to reviewing the WCED’s approach to ensuring that learners are safe in school. Currently, the WCED employs just 46 people under its Safe Schools Programme, which is meant to cater for over 1,500 Western Cape Schools.

–          At 74% of schools that we audited, there was no toilet for learners with disabilities. This was even worse for rural schools, where 86% had no toilet for disabled learners.

–          The WCED says that it will not provide infrastructure upgrades for 266 schools built on private land – these schools won’t receive any new buildings, proper toilets and fences, or libraries and labs. Many of these schools are built from inappropriate and dangerous materials like asbestos.

–          Inadequate and unequal access to sanitary pads and bins, where richer schools have far better access than rural and township schools.

–          Many schools have broken toilets because there are too many learners per toilet, and not enough money to hire cleaners. 57% of Western Cape schools don’t meet the WCED minimum of one toilet for every 35 learners and there is no standard ratio of cleaning staff to school population.

On 20 September, members of EE handed all of this information and more to Education MEC Debbie Schafer, Community Safety MEC Dan Plato, and Deputy Provincial Police Commissioner Thembekile Patekile.[1] These officials were also handed a list of 20 demands (https://equaleducation.org.za/wp-content/uploads/2016/09/2016.09.20-EE-Western-Cape-list-of-demands.pdf), including the following:

–          The WCED, SAPS and other relevant government departments need to coordinate their efforts and work together more closely on the issue of school safety.

–          The WCED needs to audit every school that doesn’t have proper infrastructure for disabled learners and put together a plan to urgently provide this infrastructure.

–          The national government must put together a plan and a budget to provide pads and dignity packs to all learners who need them – these should be compulsory, same as with textbooks and stationery.

–          The Western Cape government shouldn’t build any more bicycle lanes, dog parks or upgrades for rich areas until every school in this province is functioning with proper safety and sanitation infrastructure.

–          The Minister of Police and the SAPS leadership in the province must deal with the issue of inequality in SAPS resource allocation urgently.

–          The MEC must explain in public how it can be legal to exclude these 266 schools from their Norms and Standards plan, and how they will ensure the safety of these learners in the meantime.

–          The MEC and the Premier must both take back and apologise for misleading the public about this social audit report and about the serious issues facing our education system, in violation of their oaths of office.

None of these demands have been responded to by any of the departments and agencies to which they are directed.

In response, Equalisers staged a protested outside Premier Helen Zille’s book launch at the Fugard Theatre on Tuesday 11th October. The purpose of the protest was to demand that Premier Zille, who is responsible for the performance of her MECs and the province as a whole, must instruct them to attend the public hearing and account to learners and parents of this province.

The Premier refused to come out to listen to the learners and receive their demand. Instead learners were met with riot police and armoured cars. The Premier eventually sent out two representatives from her office who promised to secure a response from her by Wednesday 12th. So far we have received nothing but evasions and excuses from the Premier’s office.

Today, through their strike action, learners are reiterating these demands and taking radical steps to hold the government of this province to account.

To arrange interviews with learner members of EE contact:

Visit this page to get more info, including the full social audit report and list of demands:

[1] Social Development MEC Albert Fritz was also present at the press conference, but left halfway through without any apology or explanation to the learners present. Shameful behaviour by public officials appears to be trending nationally.