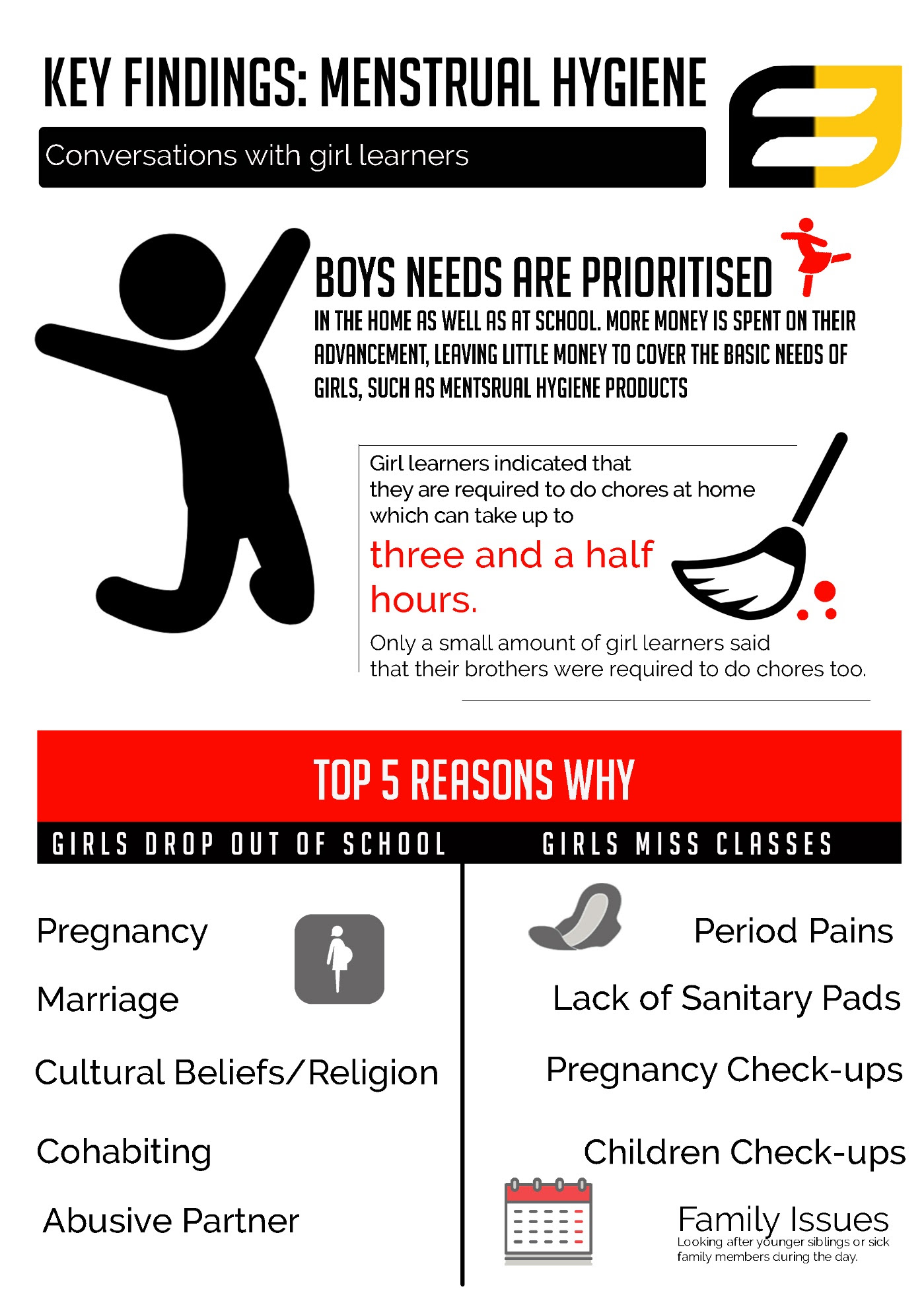 On a global level, conversations around menstruation, and in particular access to feminine hygiene products, are increasingly on the agenda.

Its prominence in public discourse – which informs public policy – requires a concerted effort to challenge the stigma around menstruation. In many African cultural settings, any speak of menstruation is taboo. Yet menstruation and the lack of access to feminine hygiene products such as sanitary pads, have a direct and negative impact on the right of girl learners to access education. Many girl learners miss valuable classroom time while menstruating.

In 2013, Equal Education (EE) launched a Sanitation Campaign aimed at addressing the sanitation crisis in Gauteng schools, and to ensure that government established policies to improve conditions. Over two years a social audit was carried out in over 200 schools across Gauteng, which revealed the horrendous sanitation problems that learners were subjected to everyday. A key finding of that audit was that access to sanitary hygiene products was often limited if not non-existent.

The month of October has been declared Social Development Month, by the Gauteng Department of Social Development (GDSD). Subsequently the GDSD has committed the provincial government to allocating over R315 million to the distribution of feminine hygiene products. The goal is to provide one million dignity packs (containing sanitary pads among other items) to girl learners.

According to its own data, the current distribution by the GDSD only covers 18% of the no-fee schools, and only 8% of all girl learners between ages 12 and 18 are benefiting.

Equal Education held a summit in 2015 where, based on the findings of the sanitation social audit, our members demanded of the Gauteng Department of Education (GDE) that plans to address the infrastructure and sanitation crisis be made known. Subsequent promises made by the GDE included the provision of 21 000 dignity packs to girl learners, to prevent menstruating girl learners from missing school. The GDE, in partnership with the GDSD, initiated a project to distribute dignity packs to schools with girls who lacked access to these. The current Gauteng Education MEC Panyaza Lesufi, committed to delivering dignity packs as part of the “unconditional” acceptance of the demands made by Equal Education members. Aside from inaccessible and broken toilets, in 70% of these schools learners had no access to soap or sanitary bins. This is a grave violation of the dignity of learners, and girl learners in particular.

At the beginning of 2016, Equal Education Gauteng embarked on a survey of 36 of the 209 schools to which dignity packs were being distributed in order to assess the impact of the dignity campaign (19 secondary schools and 17 primary schools across nine districts, quintile 1 to quintile 3 schools).  This report was submitted upon request to the GDE to be escalated to the social cluster. We recognise the effort made by the GDSD and GDE to address the issue of feminine hygiene. However, our findings revealed that there remains room for progress:

“I was scared; I thought there was something wrong with me. I forgot I was in class and I could not concentrate. It took me a very long time to get to understand periods; menstruation gave me a different feeling about myself.”– Learner from Tshwelopele Secondary School (Tembisa).

There are serious gaps in current efforts to address access to sanitary pads, and education about menstruation. It is tempting to ask whether adequate measures were established to ensure the effectiveness and sustainability of the dignity packs programme, as has been the case with the “classroom of the future” programme.

Equal Education recognises the effort made by the GDSD in attempting to reach one million learners in the distribution of dignity packs within the next three years. However, we question the sustainably of this project in addressing the fundamental issue. Equal Education makes the following demands of the GDE and the GDSD:

Conversations around menstruation and access to feminine hygiene products are an important step in contributing toward achieving gender equality. Government should not be satisfied with haphazard measures to address the very urgent need.

Leanne Jansen-ThomasEqual Education Gauteng demands a coherent and sustainable response to the need for sanitary pads!10.25.2016