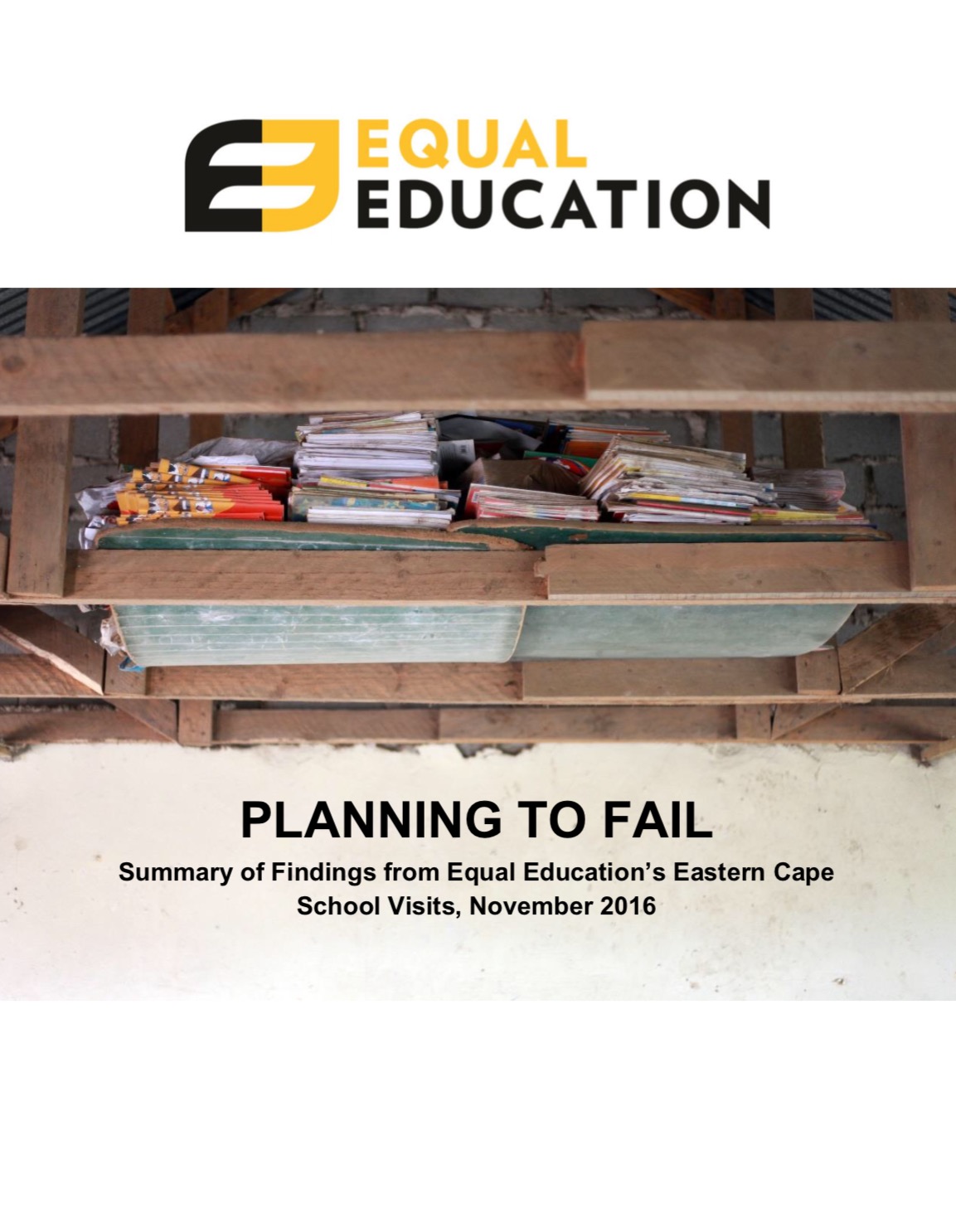 As of yesterday, 29 November 2016, it is now illegal for any school in South Africa not to have access to water, electricity or toilets, and for any school to be built of wood, mud, asbestos, or zinc.

In cases where this school infrastructure law (known formally as Regulations relating to Minimum Uniform Norms and Standards for School Infrastructure, or Norms and Standards) is violated, individual schools now have the power to take Basic Education Angie Motshekga and the relevant provincial education MEC to court for failing in their duties.

The Department of Basic Education (DBE) had by 29 November 2016 admitted that it was going to fail to meet the first three year deadline stipulated by the law, but maintained both that its best efforts had been made, and that there had been significant progress: remaining backlogs are apparently small.

It is true that there has been some progress made. Equal Education (EE) celebrates every new school built as a victory for learners. The point should also be made that many of these schools would never have been built were it not for EE’s five year campaign on school infrastructure. The Norms and Standards for School Infrastructure were won through struggle, by learners, teachers, parents and activists. When Minister Angie Motshekga had not budged, this battle went to court. These Norms and Standards have pushed government to take infrastructure seriously.

However, the newly built and upgraded schools are outnumbered massively by those still suffering without the basic resources needed to function.

THE EASTERN CAPE, THE SITE OF STRUGGLE

In November 2016, Equal Education (EE) visited 60 schools across seven districts in the Eastern Cape, investigating government’s compliance with its legally binding plan to fix all schools.

What we found in the Eastern Cape were crisis conditions. We visited schools suffering appalling infrastructure. Today we make public a 45-page report with a summary of our findings. Some schools were substantially or entirely made of inappropriate materials or had no access to water or electricity. In total 17 of the 60 schools we visited constitute an outright violation of the three year Norms and Standards deadline.

In other instances, government has done the bare minimum to comply with the law, and has shown contempt for the spirit of the law. This contempt has manifested in denying any obligation to upgrade schools where every building on the school premises is made of an inappropriate material, save for the administration block. Where developments have occurred, it frequently takes place in narrow ways which avoid breaking the law, but also avoid meaningfully providing basic services as is actually required.  Some schools we visited have been electrified only in the administration block; plain pit latrines are often provided as the only access to sanitation, with unreasonable learner to toilet ratios.

The findings regarding these 60 schools do not just represent individual cases of failure. Rather, they illuminate the depth of systemic failure in Eastern Cape Education. Basic Education Minister Angie Motshekga’s claims of substantial progress made, and intense political will behind achieving the deadline, are both contradicted by our experience on the ground. We found a number of schools with serious infrastructural needs which were not on either provincial or national project lists for upgrades. These are the country’s forgotten schools, left to languish.

Either they are unknown, or the DBE sees no obligation to upgrade them. Further, poor and incomplete delivery of services exposes the poor monitoring of contractors and implementing agents.

All of these issues are reproduced on a provincial level. Data on backlogs are unreliable, and planning has been poor and chaotic. National and provincial infrastructure budgets have been left underspent, government is unable to monitor actual delivery of infrastructure, and responsibility for the governance of the ECDOE is disputed and unclear.

The DBE and the ECDOE planned to fail, and have failed to plan adequately in order to comply with the law. We expect this to be confirmed when we analyse the individual provincial progress reports.

OF THE 60 SCHOOLS SURVEYED, WE FOUND

EE has lodged court papers against the DBE to close loopholes in the Norms and Standards, asking the court to include requirements in the law to:

This is no way undermines the importance of the Norms and Standards. Rather, this is part of a process of turning them into regulations which communities can use to hold government accountable.

After the 29 November deadline, schools which do not comply with the three year deadline are violations of the law. Individual schools will be able to litigate against the department to get their schools fixed.

Mass action, mobilisation and activism must continue to advocate for improvements in education on a structural level.

Beyond the legal challenge, the real question for our people is how to mobilise against such spectacular failure by the DBE. We have engaged communities and will continue to do so. In the next few months EE will be criss-crossing the country to meet with all and sundry, people who want to see the struggle to #FixOurSchools realised – especially those in the rural areas of South Africa.

2017 will see EE advocating intensely against the neglect of rural people in SA – the same neglect that has seen the Norms and Standards law being violated by Minister Motshekga and her nine MECs.

2017 is the year of focusing the struggle for an equitable education system on the issues faced by rural learners in South Africa.

WHAT THE NORMS AND STANDARDS REQUIRE

Norms and Standards set out the basic infrastructure a school needs, to give learners a proper education. These regulations describe what makes a school a school. They also set deadlines for when different kinds of infrastructure must be provided, counted from when they were published, 29 November 2013.