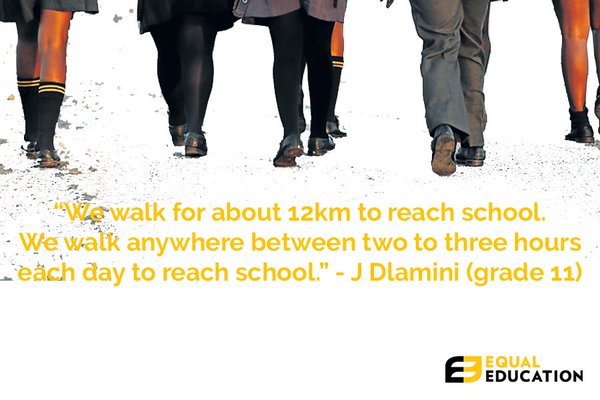 KwaZulu-Natal SOPA 2017: Funds for Pomp, Ceremony and SUVs but not for Scholar Transport

This morning on Wednesday 1 March 2017, members of Equal Education will gather in Pietermaritzburg for the KwaZulu-Natal (KZN) State of the Province Address, in protest against the callous neglect of scholar transport in the province.

Equal Education has relentlessly advocated for the provision of scholar transport in KZN since 2014, when parents, teachers and learners in Nquthu testified to the brutally long distances that learners must walk to school. Learners frequently traverse dangerous and treacherous terrain, as well as fall victim to violent crime on the way to school. Learners are arriving at school tired, hungry, and unable to focus.

According to a 2016 publication by Statistics South Africa, KZN has a higher proportion of learners who walk to school and back for more than two hours each day than any other province.[1] In 2013 the number of learners in KZN making the two-hour trek stood at 280,000 learners.[2] While an updated figure has not been released, it is safe to assume that the increased provision of transport to 28,390 extra learners since 2013 has not significantly dented that number. [3]

The woefully inadequate provision of scholar transport is an immense barrier to accessing education. The neglect that this crucial area suffers under the departments of education and transport is mind-boggling, and cruel. KZN Premier Willies Mchunu is driven around in an eye-wateringly expensive Mercedes SUV, the cost of which could fund up to nine busses of learners travelling to and from school each year.[4]

In its 2015/16 to 2019/20 Strategic Plan, the KZN Department of Transport (DoT) acknowledges the “dire need” for learners’ transport, but admits that “the demand far exceeds the department’s capacity to deliver.”[5]

The Failure to Prioritise Learner Transport

Information on how many KZN learners are currently provided with transport, how many are still in need, and how much it will cost DoT to fulfill its legal mandate to provide transport to learners who qualify  is not readily available –  various  government departments, and the various documents they release, cite very different values.[6] The DoT budget provides no information on the different modes of transport used, making it difficult to assess the cost per learner.

This inconsistency and lack of clarity in official reports reveals how little regard is given to scholar transport.

Equal Education has held meetings with the KZN DoT and the KZN Education Department, but to no avail – they behave as if they are run by two opposing parties. The departments demonstrate no real interest in working together to provide scholar transport.

Despite having the greatest need, KZN has one of the lowest expenditures on transport of any province. The KZN DoT blames insufficient funding for its failure to provide sufficient scholar transport, claiming that “the meagre budget falls way too short.”[7]

The KZN DoT claims to have transported 43, 990 learners with R201.403 million in 2015/16. In 2016/17 it planned to transport an increased number of 44 490, but according to the 2015/2016 budget forecast the amount allocated to scholar transport would decrease to R186 million.  A newspaper article reporting on the issue cites the same value of R186 million[8], suggesting that no adjustment has yet been made to the original forecast.

The KZN DoT has said, multiple times, that it will cost almost R5 billion to address the backlog in the provision of scholar transport in the province. [9]

Given this desperate need, it is shocking that KZN Finance MEC Belinda Scott barely mentioned the issue in her 2016/17 budget speech, stating only that the DoT “will continue with the provision of learner transport services and the subsidisation of bus services in the province.”[10]

We demand a conditional grant to fund the urgent implementation of a proper Scholar Transport Policy.

We demand clear, consistent and accurate information on how many learners qualify for subsidised transport, how many currently receive it, and the cost of providing such transport.

Leanne Jansen-ThomasKwaZulu-Natal SOPA 2017: Funds for Pomp, Ceremony and SUVs but not for Scholar Transport03.01.2017