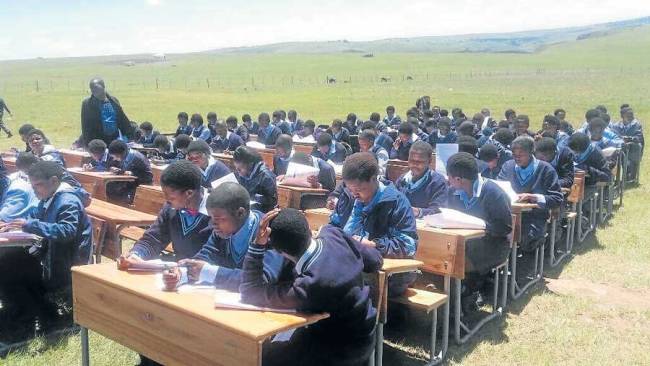 *Published in The Daily Dispatch

Xhentse SS is a quintile one school (the poorest category) in Maqhingeni, a village in Libode. Three classrooms serve over 200 pupils from Grades 10 to 12.

All three classrooms were built in 1997 by community members when each household donated R30 to build the only high school in the village.

Overcrowding at the school is so severe that, during exam time, some pupils must go to a different school to write exams while others suffer outdoors.

This is testament to the committed educators and pupils who strive for excellence in an unconducive environment.

In November, a team from Equal Education visited Xhentse SS and other schools in Libode, collecting data on the state of school infrastructure in rural parts of the province.

As well as the classroom shortage at Xhentse, we found the fence to have so many holes that the school and those who occupy it are vulnerable to criminals.

They are also reliant on rainwater harvesting which means that during dry seasons pupils have no access to water.

The inadequate infrastructure at Xhentse SS illustrates the type of crisis conditions we found in November. We were investigating the government’s compliance with the Minimum Regulations Relating to Norms and Standards for School Infrastructure, the law which states that by November 29, 2016, all public schools must have had access to water, sanitation, electricity and be made of appropriate structures (not mud, wood, asbestos, or zinc).

Of the 60 schools we visited, 17 were in violation of the first norms and standards deadline. The other 43 schools were not outright violations of the law. Many of the 43, including Xhentse SS, nonetheless had pressing infrastructure needs that deserve the attention of the state.

While the overcrowded classrooms at Xhentse SS pose an urgent crisis for learners, the Eastern Cape department of education has no binding obligation to fix this until November 29, 2020, when the norms and standards stipulate that an adequate supply of classrooms must be provided.

Currently Xhentse SS is neither on the national nor the provincial list of schools that will receive upgrades to their infrastructure. Teaching and learning conditions do not represent an outright violation of the norms and standards.

They are nonetheless violations of the spirit of the school infrastructure law – to transform an unequal education system.

Immediately after our visit, Equal Education posted a photograph of those Grade 10 pupils writing their exams outside on Twitter and Face Book, as well as a video narrated by the school principal.

The image went viral: it made front page news, and the public reaction was one of disbelief and outrage.

On November 25, a week after our video went viral and Xhentse SS received media attention, we received extremely encouraging news. The department had provided the school with five prefabricated classrooms. We hailed this as a sign that the department, when pressured, can bring swift relief to schools.

To our surprise and dismay, this year we discovered that the five prefabs, which had been delivered months earlier, sat unused.

The prefabs stood a few tantalising metres away from one classroom which served 85 pupils and another which served 89. All five were unfurnished. And, shockingly, they were all locked – the school was never given the keys.

“The only person we were communicating with was the circuit manager. Only when the desks were delivered were we able to enter one of the prefabs to see that all the keys were locked in there. We can now use one prefab which has furniture, but the rest do not,” said Fikile Qoyi, the principal of Xhentse.

Unfortunately, our hope that the department was prioritising schools with pressing infrastructure needs gave way to the reality that, in the Eastern Cape, there is a lack of a capable state.

The department is characterised by high vacancy rates and frequent staff turnover. The physical resources management chief directorate was not advertised for until June 2015, at which point the infrastructure department had a vacancy rate of 28.6%.

Today the exact structure of the department is opaque, with no publicly available organogram that represents the current leadership. EE has charted the organogram of the education department which highlights the actors involved in the planning and implementation of school infrastructure.

As the case of Xhentse SS demonstrates, the deep bureaucratic chaos within the department made even the simple provision of prefabs a complicated, and unresolved problem for Xhentse SS.

In March EE convened a community meeting in Libode, one of a number around the province, to brief parents, teachers, and pupils on the final report from our school visits, titled “Planning to Fail”, and to discuss a way forward for Xhentse SS since the department’s failed intervention.

The school’s problem is not extraordinary. When we visited Lower Ntlaza Primary in Libode, it did not have the keys to its prefabs either.

This February pupils at Emdeni Senior Secondary School placed their classroom chairs across the R63, blocking traffic, in order to gain access to temporary classrooms that remained locked long after they were delivered.

“The handover of the prefabs was not until June 5, and the department wasn’t going to give us the keys until then. We have had the temporary structures since November last year. We can use one now, but we need furniture for the other four. All five lack electricity,” Qoyi said.

The media outrage over Xhentse proved what is possible when there is genuine political will applied to a school in need.

At the same time, the incomplete nature of the upgrades also reveals the systemic weakness of the department. Equal Education has continued to advocate for Xhentse SS and other schools across the Eastern Cape long after the news cycle moved on.

On Freedom Day of this year we marched to the doors of the department to present officials with our “Planning to Fail” report. Other schools we visited and named in the report are starting to finally see changes too. Since our school visits, Qonce High School in King William’s Town has received five desperately needed prefabs, and construction has started at Nyandeni JSS in Libode of two new classroom blocks.

This does not mean the department has miraculously fixed its failures. But it does show what is possible when an informed and organised mass of pupils, teachers, and rural community members refuse to accept those failures.