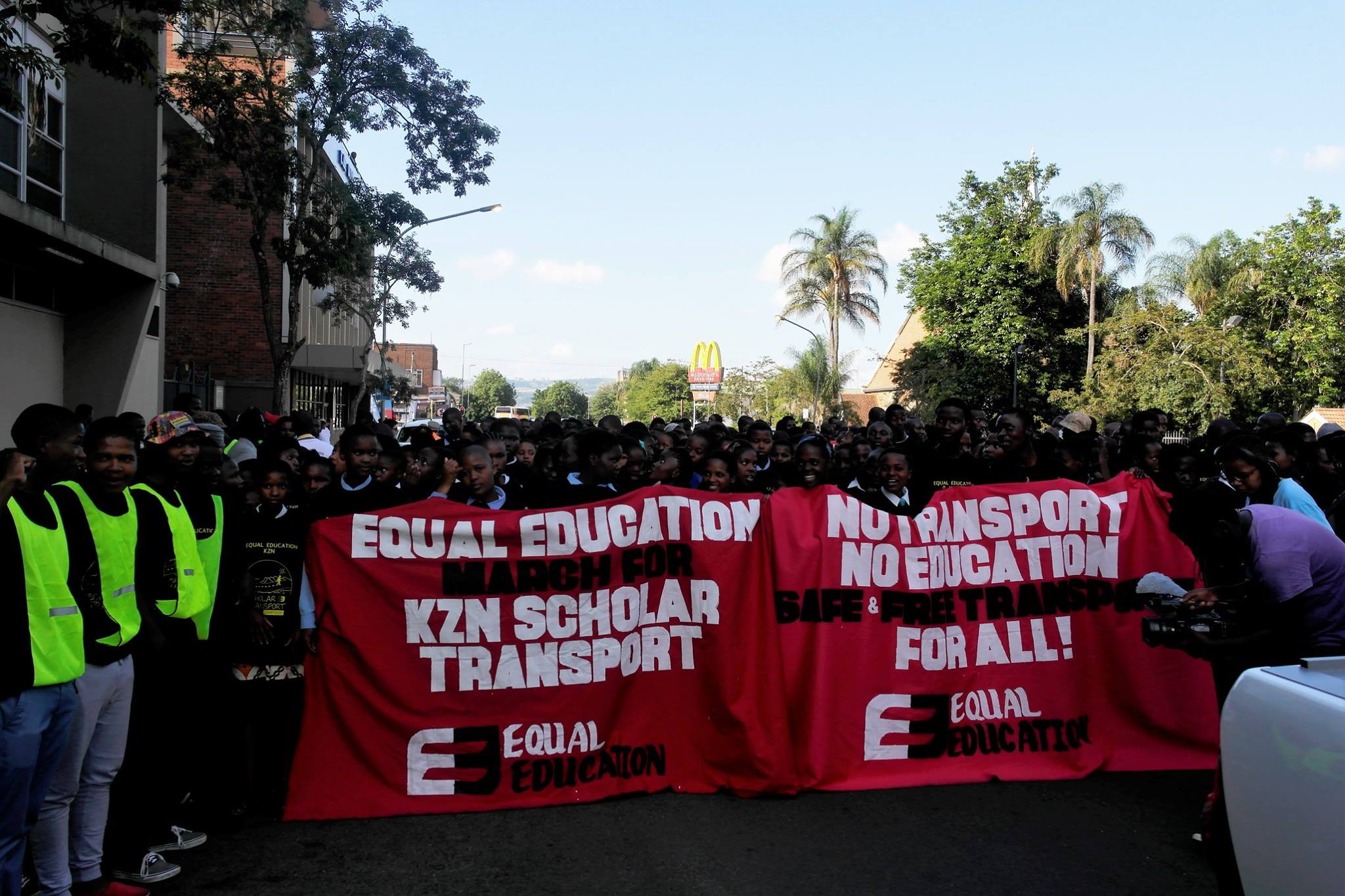 Since 2014, Equal Education (EE) has been campaigning for the provision of safe, government-subsidised scholar transport in KwaZulu-Natal (KZN) and in South Africa. We have marched, picketed, and many times formally engaged provincial and national government in writing and in person.

Our members have secured hard-fought victories, including the provision of government-subsidised buses to three schools in Nquthu in Northern KZN, the publication of the National Learner Transport Policy, and finally winning a public commitment from the Basic Education Department to work with National Treasury to explore the introduction of a conditional grant to fund scholar transport.

It is however still the case that learners in KZN (and elsewhere in the country) must walk punishing distances to access an education, vulnerable to severe weather and violent crime, and arriving at their classrooms late and unable to focus.

It was members of EE based in Nquthu, in northern KZN, who identified a lack of scholar transport as a serious barrier to accessing education, and who lead EE’s provincial and national campaign. For over two years, EE and Equal Education Law Centre (EELC) have been working to secure access to scholar transport for 12 schools in Nquthu.

Mobilisation and protest, engagement at the political and bureaucratic level of provincial government, and multiple submissions to Parliament have been features of EE’s #LongWalkToSchool campaign.

The KZN Departments of Education and Transport are refusing to provide scholar transport to seven of the 12 schools, claiming that they do not have the money to do so. The Departments claim that the remaining five  schools are “schools of choice” and not “schools of need” – that these are not the schools nearest to the homes of the learners that attend them.

It has now become necessary for Equal Education to litigate.

EE is requesting the Pietermaritzburg High Court to do the following:

a. The status of the KZN Scholar Transport Policy (which for years has been referred to as a “draft policy”);

b. The way in which officials from the Provincial Departments of Transport and Education will co-operate with each other in terms of planning, providing, implementing, monitoring and evaluating scholar transport in KZN;

c. The information the Departments of Transport and Education collected to determine the need for scholar transport in KZN;

d. What alternative modes of transport are being considered for scholar transport in KZN, and whether and by when these will be implemented;

e. The plan of the Provincial Departments of Transport and Education to address the need for scholar transport in the 12 schools, and by when; and

f. The plan of the Provincial Departments of Transport and Education to address the need for scholar transport in KZN, and by when.

The lives of tens of thousands of children are at risk daily: travelling long distances on foot, in the back of bakkies, and in vehicles and with drivers who are not subjected to any sort of screening process.

The KZN Departments of Education and Transport fail to demonstrate the coordination and urgency required to ensure that all learners who are in need of scholar transport are accurately identified, and that the crucial service is immediately made available.

The notice of motion and founding affidavits may be accessed here.