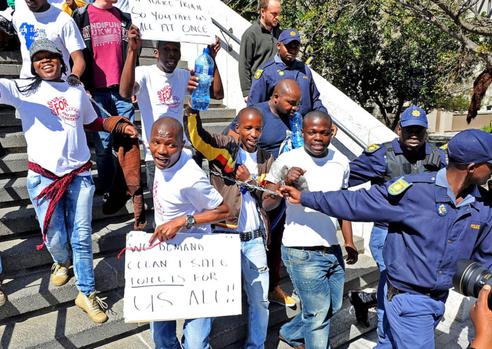 In the month in which we commemorate the 41st anniversary of the Soweto Uprising of 1976, Equal Education is joining the Social Justice Coalition (SJC) in court to challenge the criminalisation of peaceful protest.

In 2013, 10 SJC activists chained themselves to the steps of the Cape Town Civic Centre in protest, demanding better sanitation in Khayelitsha and other poor communities around the city. Although they were subsequently joined by 11 other supporters, the protest was both peaceful and unarmed, and did not disrupt access to the Civic Centre. Regardless of this, the metro police arrested them. Their crime? Failing to notify the city authorities prior to the protest.

They are now appealing their guilty convictions to the Western Cape High Court. They are also challenging the constitutionality of the Gatherings Act on the grounds that it unreasonably and unjustifiably limits the right to assemble as contained in section 17 of the Constitution. The appeal will be heard on 14 and 15 June 2017.

Equal Education (EE) has been admitted as a friend of the court in this appeal. EE’s high school learner members regularly organise marches and other public demonstrations to advocate for improvements in their schools. They have led campaigns for school libraries, for scholar transport, school safety, and also a national campaign to have a law introduced (and complied with) that stipulates infrastructure features and standards for all public schools in South Africa (Minimum Norms and Standards). EE will therefore ask that the court keep EE members and other children in mind when considering the constitutionality of the Gatherings Act. EE argues that criminalising the right to participate in peaceful and necessary protests fails to take into account the importance of the right to protest for children, and also their best interests.

Since children are unable to vote, protest is a vital avenue available to them to participate in the political life of the country. Protest is an important means by which children can express their ideas, advocate for their own causes and meaningfully participate in decision-making processes. Protest is also inextricably linked to children’s freedom of expression and dignity. EE therefore argues that criminalisation of protest is likely to chill this avenue of expression for children and silence their voices.

Members of EE and SJC will this week pay tribute to the learners and youth of 1976 who sacrificed their lives fighting for education and social justice. They will remember that protest in 1976 was met by an armed police force of the apartheid state and the threat of arrest. It is precisely why they will be outside the Western Cape High Court, in support of the constitutional challenge and against the criminalisation of peaceful protest in a democratic South Africa.