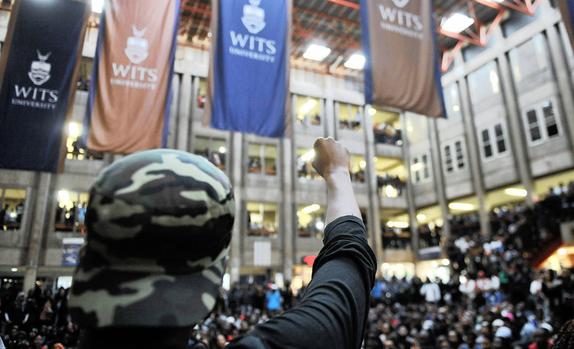 The programme’s private-public partnership (PPP) model embodies the recent trend of privatising social services. For many, the private sector is seen to possess the high levels of efficiency required to drive social change and bridge inequalities. This is a fallacy that was exposed when the social grant crisis came to light.

In April 2016, a ministerial task team was established by the minister of higher education and training, and placed under the leadership of former chief executive of First Rand and current National Student Financial Aid Scheme (NSFAS) chairperson, Sizwe Nxasana.

The team was mandated to develop a support and funding model for poor and “missing middle” students.

Its findings were released in a report that includes the declaration that fee-free university is possible and financially viable in the short term for very poor students, and could be funded by subsidies and loans.

The report recommended the establishment of the programme as a PPP, whose presiding body would be a donor steering-committee.

The private component will constitute a managing company called “ManCo” that will be funded through its parent company, “FundCo”. The scheme will act as a conduit for public sector funding.

The Ikusasa aid programme pilot was launched this year, ahead of its proposed implementation in 2018.

Meanwhile, NSFAS launched its “student-centric” model, which was developed to deal with the issues that have been plaguing the financial scheme for years, with the very same timelines.

The current pilot funds 1000 students. Something worth noting is that the loan component of this programme is tiered by both the student’s personal financial circumstances and by the year of study.

Should a student qualify for a combined grant and loan due to their means, it is likely that the grant component will have evolved into a loan that includes an expected family contribution by their final year of study – but a family’s financial means does not suddenly change while a student is still studying.

This raises concerns that these students and their often poor parents may inevitably end up locked into deeper debt.

A closer look reveals that much of the funds have been allocated in a way that safeguards the investments of the 25 private-sector companies that are funding the pilot, as opposed to allocating them according to need.

Students who previously attended quintile 1 to 3 schools (no-fee schools) often come from households that have no capacity to generate and acquire the funds needed for further education.

Given this, students from no- fee-paying schools will almost always end up attending historically black institutions of higher learning.

There is no doubt about whether poor students should be prioritised in the realisation of free higher education; however this is not what has been observed.

When students marched for free education in 2015, corporate South Africa remained mostly silent, with many students criticising their lack of support for the movement.

Yet, in light of this PPP’s establishment, corporate South Africa has suddenly managed to raise more than R138million in four months for the pilot.

This is intriguing at first glance, because it can be understood as possibly the first time that the private sector is finally contributing to support higher education in a meaningful way.

However, upon deeper interrogation, this long-overdue participation appears to be in no way altruistic.

The private sector has always possessed the means to finance the education of many poor young South Africans, but has for years opted not to do so.

One has to wonder what has motivated such a massive contribution in such a short amount of time?

The answer to this may lie in the amendments to the NSFAS Act, the SA Revenue Service Act and the Income Tax Act, as recommended by the ministerial task team.

These amendments would alter the functionality, reach and conditions under which grants and loans are determined.

Additionally, these amendments would render Sars the official collecting agent for Isfap and allow it to be exempt from income tax.

This would empower the financial aid programme to issue section 18(a) tax certificates to donors that would see the donors benefiting from the same tax exemptions they would receive if they were donating to public-benefit organisations.

As the vice-chairperson of the Sars board and a member of the Income Tax Special Court, Nxasana sits in an advantageous position – it seems he will not have too difficult a time proposing the amendments to the laws of these structures.

Yet, the need to make such changes to a legislative framework that is intended to protect the public’s interests is cause for great concern.

Particularly the proposed amendments to the Sars laws, which would see Isfap loan repayments being collected by Sars from a loan recipient, in a manner similar to that of deductions, such as tax and UIF from an employee’s salary.

What would happen if the Ikusasa donors were to garnish their repayment order with other financial obligations by the loan recipient and send Sars an instruction to deduct this money?

What legislative framework exists to ensure that this would not occur without the Isfap loan recipient’s consent?

The social grants crisis revealed to South Africans just how predatory PPP agreements can become if they are allowed to run unchecked.

Would ManCo and FundCo receive access to individual loan recipients’ personal details? If so, to what extent will the information remain confidential and not be used for the private component of the PPP’s own profit or gain?

Finally, a critical question that must be posed to the stakeholders involved in Isfap is: Who are these amendments designed to protect?

Should the Isfap PPP model be implemented and fail, will it be the state or the private sector stakeholders who must absorb the fallout?

If it is to be the state, then the public ought to be well aware of the gamble being made with their tax money.

Nxasana is a major proponent of the privatisation of basic education, with his Sifiso Learning Group establishing private schools around the country.

But organisations such as the UN consistently warn against the dangers involved in the privatisation of education – noting the widening gap they often create in socio-economic and inequality levels in a country.

Thus it is not difficult to view the introduction of Isfap as a progression from Nxasana’s profit-making in the provision of basic education into higher education.

A true commitment to the realisation of free tertiary education in South Africa ought not further trap young people into debt with predatory loan schemes.

It also should build on and address the challenges inherent in the public-sector funding mechanisms, and it must never be a method of driving profit for big corporates.

The trend to privatise the provision of social services undermines the building of a capable state in that it allows the government to abdicate its role as the provider of these social needs while driving profit for big corporates, which further exacerbates socio-economic inequality.

Higher education may not be an immediately realisable right according to the Freedom Charter, but its realisation must not be one that further traps young people in situations of economic hardship.

Programmes like Isfap ought to be deeply interrogated for the sake of South Africa’s youth.

#FeesMustFall was about eradicating the exorbitant cost of higher education, not deferring it, while the rich become richer.