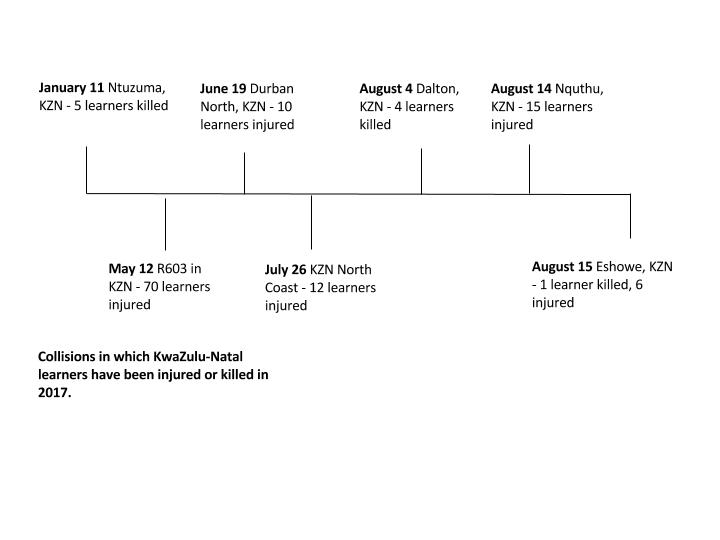 As at the end of August, at least 10 learners have died and at least 113 have been injured in taxi and bakkie collisions in KwaZulu-Natal in 2017.

In one of the more recent incidents, a taxi transporting learners home from Ngwane High School in Nquthu crashed, injuring all 15 learners inside. Ngwane High is one of the schools that we have been working with since the inception of the #LongWalkToSchool campaign, and that the KZN Education Department acknowledges is eligible to receive scholar transport. However, the Department has refused to provide government-subsidised buses for the school, claiming that it does not have money to do so.

And so everyday learners risk their lives to reach their schools. The day after the Ngwane High crash, one learner was killed and six were critically injured when the bakkie they were travelling in to school crashed between Eshowe and Mandini. Earlier this month, a collision claimed the lives of four KZN learners who were returning from school. Last month, 12 learners in Ntuzuma were injured when their taxi crashed.  In the same area, a few months prior, five learners were killed and 20 injured when their taxi crashed into a bus. These incidents, and many others, tell a frightening truth about the state of scholar transport in KZN.

An Equal Education member in KZN, Thembeka Mhlangu*, was injured in the taxi crash on Monday 14 August, when the taxi that she was travelling in overturned. When Thembeka started going to school at Ngwane High, she had to choose between a three hour walk to school each day and a 45 minute taxi ride that her household would have to pay for themselves. Thembeka’s household now pays R350 each month for her to travel by taxi, despite the fact that the 12-seater taxi transports 22 learners at a time, has no seatbelts, and does not meet the safety standards set by government.

When The State Fails To Provide

When the State fails to provide scholar transport, learners are often forced to use private taxi services that cost impoverished households dearly. Often, these taxis do not meet the necessary safety and security standards, placing learners at a higher risk of getting injured or killed to or from school.

In 2014, at the behest of our members, EE began campaigning for:

Years of advocacy, campaigning and legal interventions have won us some victories:

Some of the National Scholar Transport Policy stipulations are:

–       Implementing authorities must ensure adequate safety and security measures while learners are in transit;

–       Operators must have an operating licence and professional driving permit; and

–       Provincial departments of transport, among others, need to ensure efficient law enforcement to monitor drivers

Sadly, the learners at Ngwane High School do not get to share in the privileges of protection under the Policy.  For Thembeka and  and her peers, who must face danger every morning and afternoon in an attempt to access education, the excuse that the KZN government has no money to provide subsidised buses is not acceptable.  After many engagements with officials, EE must now take legal steps toward providing scholar transport for 12 schools in Nquthu and in KZN generally.

Until free, safe scholar transport is provided by government, Equalisers and learners will continue to be left at the mercy of unreliable transport that may not meet safety regulations. EE will not stop fighting for the safety of these learners.