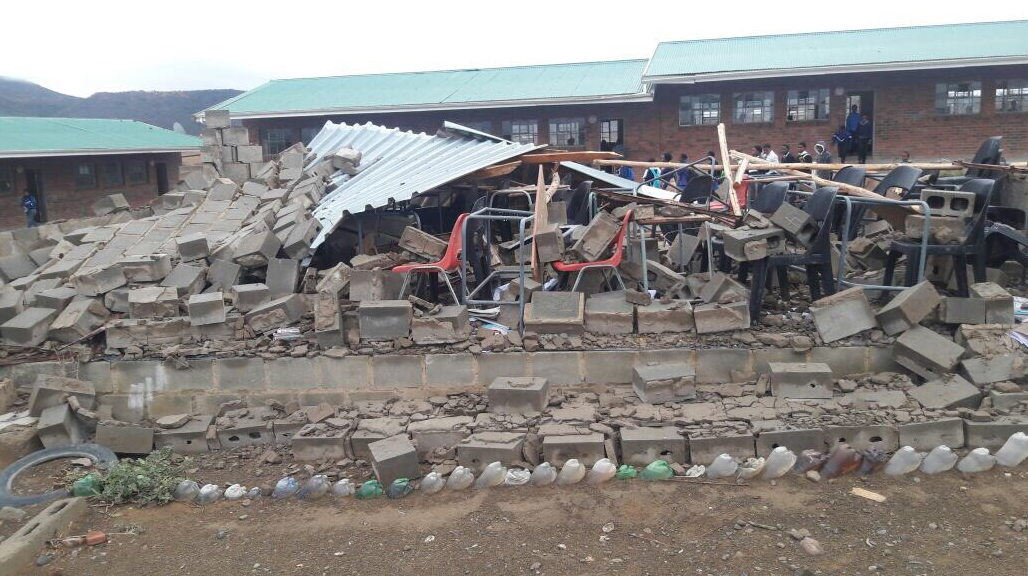 Yesterday and today, 9 and 10 October 2017, Equal Education and the Equal Education Law Centre visited Enkangala Secondary School in Weenen, Estcourt, KwaZulu-Natal. The visits followed reports that one of the school’s two classrooms had collapsed on 16 September 2017.

It has been four weeks since the collapse of the classroom, and at least two years since provincial education officials were informed of the dangerous state of the classrooms at Enkangala Seondary. It has been almost a decade since Enkangala Secondary was promised its own site – its two classrooms are currently located on the premises of Thandanani Primary School. Both classrooms are built from a mix of mud, cement and brick, and neither have windows. The structures were built by the community, with their own resources.

The collapse of the classroom at Enkangala Secondary and the state of the remaining classroom is not the result of bad weather, it is the result of negligence on the part of the KwaZulu-Natal Education Department (KZN DoE), and the non-compliance with the Norms and Standards for School Infrastructure.

Subsequent to the collapse of the classroom, the KZN DoE has treated the incident as an accident that could not have been foreseen or prevented. Our visits to the school prove otherwise.

NEGLIGENCE ON THE PART OF THE KZN DOE

In 2009, the school was informed that a different site had been earmarked for the construction of a new school premises for Enkangala Secondary, but there has been no communication on the matter since. The school was founded in 2009 to serve grades 8 and 9. It is registered with the Department of Education with its own EMIS number, and has its own school governing body (SGB).

In 2015, the now collapsed classroom began to fall apart (leaving gaping holes in the walls), the school contacted the KZN DoE District Office. But the KZN DoE failed to take steps to address the inadequate and dangerous situation for learners. Enkangala Secondary, although earmarked on KZN DoE’s Norms and Standards infrastructure project list to be replaced with a proper school building, was left untouched.

In 2016, Equal Education first became aware of the dangerous situation for Enkangala Secondary learners when it was contacted by an educator at the school. We visited the school  with eNCA on 29 November 2016, the date of the first deadline under the Norms and Standards for School Infrastructure. By that date, the State was obligated to ensure that no schools were without water, sanitation or electricity, and that every school was made from appropriate materials. The eNCA report highlighted the dangerous infrastructural conditions of the school, the lack of response from government officials to requests for new infrastructure, and ultimately the State’s failure to meet its first deadline. One teacher said: “During the rainy seasons, classes are swamped with water… For an educator to teach s/he needs to carry an umbrella so that teaching can go on, because roofs are leaking.”  The eNCA report also showed the dire and unsanitary conditions of the pit latrines at the school, the unsatisfactory and unclean source of water, and the lack of electricity in both classrooms.

On Saturday the 16th of September 2017, the inevitable happened: a classroom collapsed. The following week the school wrote to the uThukela Education District Office, notifying it of the collapse and asking for it to provide mobile classrooms, or for the relocation of learners to a  nearby crèche building. No written response or acknowledgement has been received. In telephone discussions the Circuit Manager informed the school that the crèche was occupied and said that he would look for donations towards fixing the school.

In a show of complete disregard for the situation the school finds itself in, the District Director informed the SGB Chairperson, Shayina Sithole, verbally, that two mobile classrooms are available in Bethlehem, in the Free State, but that the school would be required to cover the cost of bringing them to the learners! There have been no formal  commitments to addressing the urgent need at the school.

In an article in The Mercury, published on 10 October 2017, the KZN DoE’s Kwazi Mthethwa is quoted as saying: “There are processes that must be followed  when dealing with the Treasury, and a lot of paperwork goes into these unplanned ‘projects’ that arise as a result of natural causes.” In situations where learners are forced to learn in unsafe and inadequate structures, and the KZN DoE fails to address this, it is appalling that it adopts such a position. There is nothing “natural” about studying in classrooms without electricity, windows and doors, and which collapse in the wind. Had the KZN DoE attended to the poor infrastructure years ago, it would not have collapsed.

Since the collapse of the Enkangala Secondary classroom, Grade 9 learners have been forced to learn under a tree – this is reprehensible. When we visited, we witnessed lessons being cancelled due to rain fall, with learners having to go home and miss significant learning time. The remaining classroom, being used by Grade 8s, has been described by staff at the school as “very dangerous”, and one staff member told us “it would collapse very soon”. Like the collapsed classroom, it has large holes in its walls, without windows, and without a door.

Sithole, who has been Chairperson of the SGB since 2009, has two children at Enkangala Secondary: one in grade 8 and the other in grade 9. Sithole described to us his anger at having to send his children to school each day, knowing that they might be injured.

Thankfully, the classroom collapse occurred on a Saturday. Had it not, the learners and teachers would have been at serious risk of injury or death.

The KZN DoE must act to ensure that no learners are forced to learn outside, or inside structures which are dangerous. Like all Provincial Education Departments, it must also act swiftly to meet the Norms and Standards deadline that it already missed – almost one year after 29 November 2016, there should be no child learning in these conditions.

In response to Tweets by Equal Education on the collapse of the classroom at Enkangala High, the KZN DoE has said (on Twitter): “No one plans and desires for this”. However, being aware of the dire state of infrastructure at a school, yet failing to act year after year to improve it, is planning, it is planning to fail.