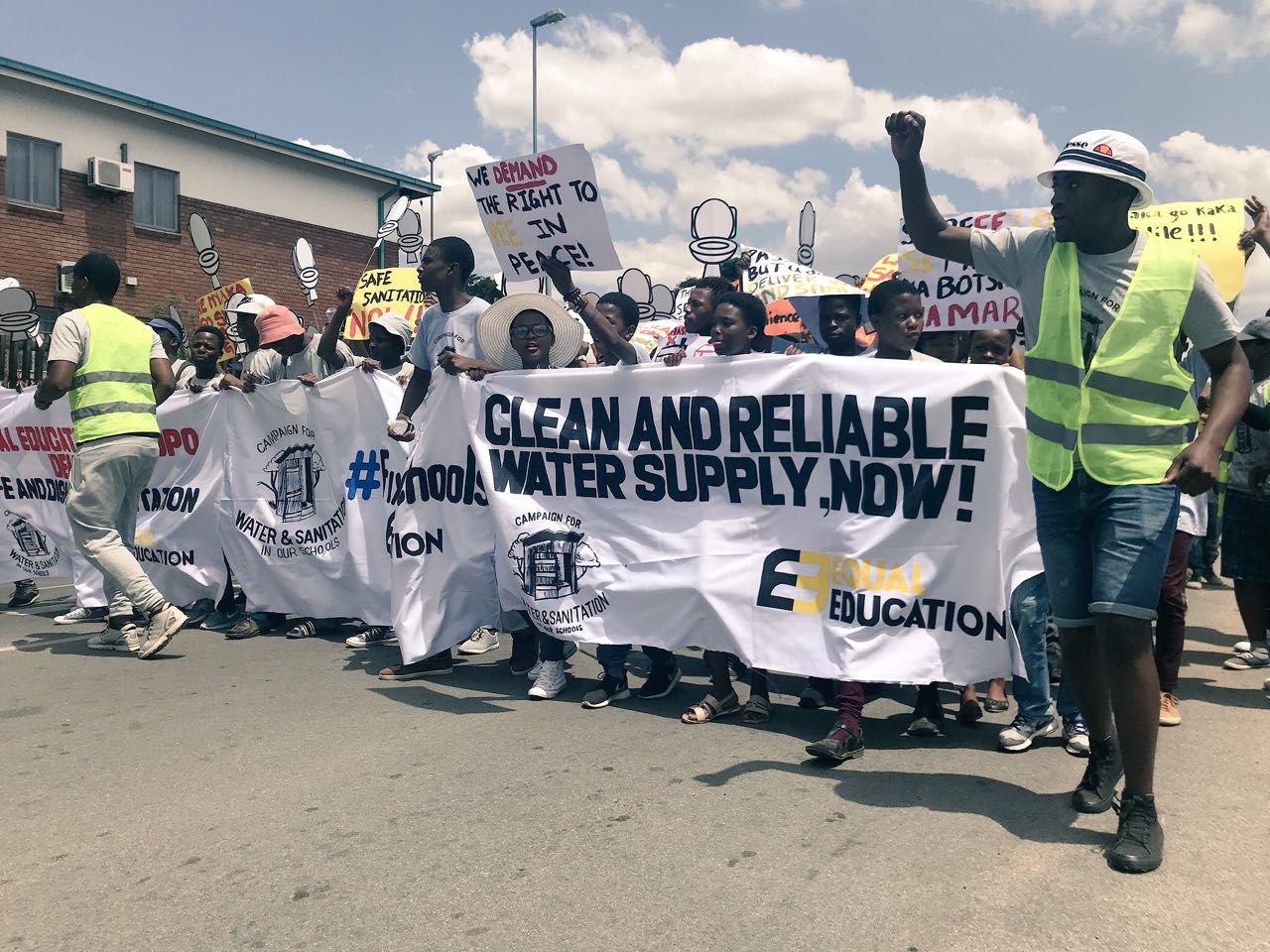 29 November 2017 marks the one year anniversary of the first deadline stipulated in the Minimum Norms and Standards for School Infrastructure – the government’s legally binding mandate to provide all public schools with basic resources. According to the Norms and Standards, by 29 November 2016 all schools must have been provided with access to water, electricity, and sanitation. All schools made completely of inappropriate materials (mud, zinc, wood, or asbestos), must have been replaced with a new school. By 29 November 2020, all schools must be provided with access to adequate water and sanitation facilities and safe fencing.

The national Department of Basic Education (DBE) as well as all nine provincial education departments (PEDs) have outright failed to meet the first Norms and Standards deadline.

There is money available to #FixOurSchools, but budgets are not being efficiently and effectively utilised. On the one hand the DBE is not able to implement its own infrastructure plans – for the 2017/2018 financial year, the basic education budget was adjusted by R415 million as a result of infrastructure underspending.

On the other hand, money that could have funded urgent infrastructure upgrades is being diverted elsewhere to serve political ends. The past couple of years have consistently seen downward revisions of the basic education budget. This while the State has continued to bailout corrupt and underperforming State-owned Enterprises (SOEs). The Passenger Rail Agency of South Africa (PRASA), for instance,  incurred a whopping R14.6 billion of irregular expenditure in the 2015/16 financial year. This is equivalent to the cost of 417 new schools. Treasury’s R3 billion bailout for South African Airways could have funded the building of 85 schools.

EE has made over 15 recommendations on ways to fund education through, for example, cutting the bloated Cabinet, reducing the employ of consultants, and stamping out tax evasion by the very wealthy.

In a written response to a Parliamentary question earlier this year, the DBE released updated information on the state of public school infrastructure in South Africa. There remain:

The DBE releases a National Education Infrastructure Management System Standard (NEIMS) report annually. NEIMS is the best large-scale picture of education infrastructure in South Africa that is available to the public. According to the 2016 NEIMS report, while the number of schools with no access to water or electricity have decreased, the number of schools with an unreliable water and electricity supply have increased. As of June 2016:

EE’s Day of National Action for school infrastructure has been marked by actions in the Eastern Cape, Western Cape, Gauteng and Limpopo.

At 4pm today Equal Education (EE) Eastern Cape will hold an evening vigil at Vukile Tshwete Senior Secondary in Keiskammahoek, a village outside of Qonce. The gathering will be addressed by school governing body (SGB) members of Vukile Tshwete Senior Secondary, and our documentary on school infrastructure will be screened. We will be joined by parents and learners from the school, as well as Equalisers (high school members of EE), from around the province.

For the most part, Vukile Tshwete Senior Secondary is nothing but precarious wood structures masquerading as a school. The state of the school is an indictment on the Eastern Cape Department of Education (ECDoE), and on infrastructure implementing agent Coega Development Corporation, a State-owned enterprise (SOE) tasked with rebuilding the school.

In April 2017, 1 500 EE members marched to the ECDoE to demand that the MEC for Education, Mandla Makupula, address the failure of the ECDoE to meet the Norms and Standards deadline. Members demanded that the ECDoE increase accountability and oversight over implementing agents and contractors. We are yet to receive a substantive response from the ECDoE.

Coega is a SOE entrusted with public money to give both managerial and project implementation support to the State to provide quality school infrastructure. Coega has been entrusted to procure contractors and professional service providers to build school infrastructure in a manner that must be transparent, cost-effective, and efficient in line with Section 217 of the Constitution.

In October 2017 we picketed outside Coega’s offices in Port Elizabeth and East London. One of our core demands included that Coega deducts financial penalties from contractors and professional service providers for slow progress of projects, including the contractors responsible for the building of Vukile Tshwete Senior Secondary. A copy of our demands can be found here.

We continue to call on learners, parents, teachers, SGBs and other education stakeholders to hold the ECDoE, Coega and all other implementing agents (including Independent Development Trust, Mvula Trust, Eastern Cape Development Corporation, and the Development Bank of South Africa) accountable to their clients: primary and secondary school learners  across the country.

Today, Equalisers in the Eastern Cape stand in solidarity with all learners in South Africa’s poor and rural schools who have been failed, but who will not be forgotten.

Today EE Western Cape members marched to the Western Cape Education Department (WCED) Metro North District Office to hand over a memorandum demanding the construction of appropriate structures for all Western Cape schools. Our members marched alongside learners and teachers of Bardale Primary School and Bardale High School, as well as members of the Mfuleni Education Forum.

Bardale Primary and Secondary School, Parliament Primary School in Mfuleni, and Nomzamo High School in Strand, are among the schools in the Western Cape which are made completely of prefabricated (prefab) structures.

While prefab classrooms are acceptable in terms of the strict letter of the Norms and Standards, they are not in accordance with the spirit of the law – to provide safe and dignified teaching and learning environments to all public schools. It is unacceptable that the WCED is not providing long term solutions to schools’ infrastructure needs.

Among the problems EE has encountered at schools with prefab classrooms are:

Western Cape Education MEC Debbie Schafer must announce her plan to replace temporary structures with proper classrooms. If there is not a plan, the WCED must develop one and share it with the public. The MEC must be held to account for the persistence of inadequate school infrastructure in her province.

EE Gauteng today picketed at Kwadedangendlale Secondary in Soweto, in protest against the failure of the Gauteng Education Department (GDE) and the Gauteng Department of Infrastructure (GDID) to fix infrastructure that poses an immediate threat to the safety of learners at this school.

In one of the school’s classroom blocks, the structures are unstable and a number of the classroom walls visibly shift when leaned against. The school has had to resort to shutting four classrooms due to the safety hazard. In October this year, a learner narrowly escaped injury when a sheet of corrugated iron fell from the roof.

Kwadedangendlale Secondary School reported deteriorating infrastructure to the GDE in 2014. In 2015, engineers contracted by the Gauteng Department of Infrastructure and Development (GDID) assessed the state of infrastructure, and infrastructure upgrades were due to begin in January 2016. According to the school, the GDID delayed giving the contractors the go ahead, and has failed to communicate effectively. As a school infrastructure implementing agent, the GDID should have instituted a project steering committee to keep the school community informed.

We demand that a comprehensive infrastructure implementation plan be created and shared publicly, with the appropriate temporary measures put in place so that that the learners of Kwadedangendlale Secondary are able to realise their constitutional right to a quality education.

Today members and supporters of EE Limpopo marched to the Limpopo Department of Education (LDoE) to demand the urgent provision of a clean, reliable water supply, and safe and dignified sanitation to 18 schools in Ga-Mashashane.

We handed over our new report entitled Dikolo tša go hloka seriti (Schools Without Dignity) to the LDoE, along with a memorandum containing our demands. Our visits to 18 schools in Ga-Mashashane confirm that the LDoE has a wholly inaccurate understanding of the state of water and sanitation provision.

With regards to the provision of sanitation, of the 18 schools we visited:

With regards to hygiene maintenance, of the 18 schools we visited:

With regards to the provision of water, of the 18 schools we visited:

These are the schools that our members attend – the same learners who we expected to contribute to the economic upliftment of the underdeveloped province. The LDoE has recently stated, as one of its strategic goals, that it aims to “ensure that the physical infrastructure and the environment of every school inspire learners to come to school and learn, as well as teachers dedicated to teaching.”[1] Our school visits revealed a reality in which, far from being inspired, dedicated learners are pushed away from learning environments by undignified sanitation conditions and a lack of water, among other issues.

The findings from the 18 school visits, coupled with an analysis of the LDoEs various plans and publications, as well as the Auditor General’s evaluations of the LDoE’s financial management, reveal a department in disarray. It is clear that the situation will remain dire if the LDoE does not increase its capacity, improve its project and procurement planning, and enhance controls on spending.

In our memorandum of demands we call for:

In January 2014, the late Michael Komape suffocated after he fell into a dilapidated pit-latrine toilet at his school in Limpopo. Almost four years later, the state of sanitation in the schools that we visited is similarly hazardous.  In memory of Michael, and in recognition of the learners who continue to be denied access to water and decent, we march today to demand a change.

MilaSTATEMENT: SA HAS FUNDS TO #FixOurSchools, IT’S IMPLEMENTATION THAT IS LACKING11.29.2017