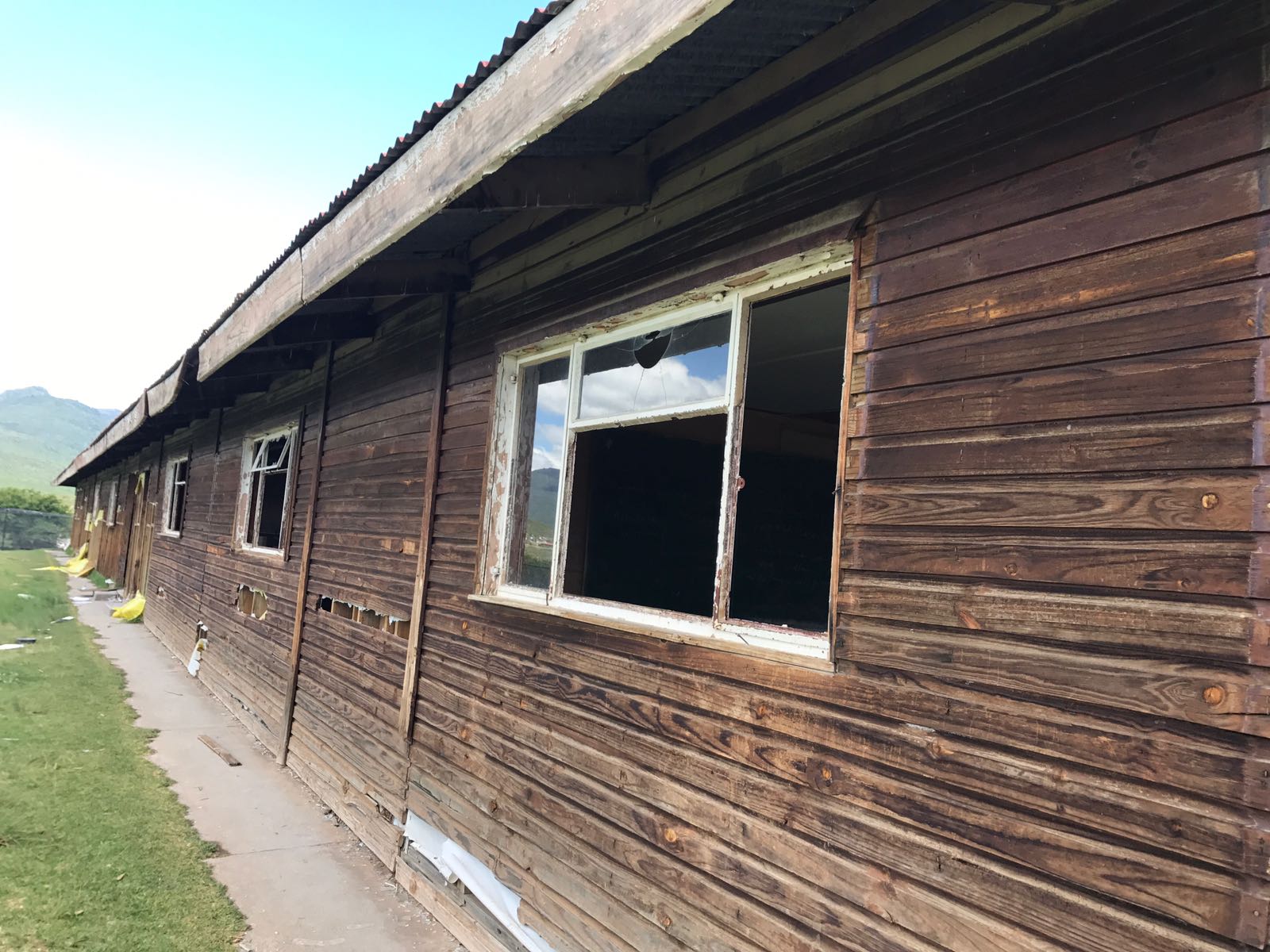 On 3 November the Mail&Guardian published our op ed, “Equalisers fight for schools not built,” on the role that Coega Development Corporation (CDC) plays in the slow delivery of school infrastructure. We reported the high amounts of irregular and wasteful expenditure incurred by the State-owned entity (SOE); specific schools where it failed to deliver; and Auditor General (AG) findings on its unfair procurement processes. Coega responded with an ironically titled piece, “Equal Education must get its facts straight” on 16 November, congratulating itself for strides made in delivering projects.

There are also 1 078 Eastern Cape schools with insufficient water supply, 2 885 with insufficient sanitation, and 1 398 with insufficient electricity supply.[1] Coega never acknowledged our complaint that schools in the Eastern Cape are built at an achingly slow pace. Instead, Coega defended its performance. As per Coega’s suggestion that we substantiate our facts and critiques, here we break down its false claims. 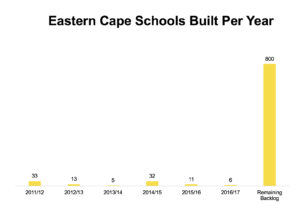 There is no publicly available list of school projects allocated to Coega that specifies dates of expected completion. The public cannot track and verify Coega’s work between 2006 and 2014. Moreover, one project does not represent the construction of an entire school, or of multiple infrastructure improvements to a school. One project could be building a fence, or building a single toilet block. A report Coega made available to EE this year states that it is currently undertaking 399 fencing projects in the Eastern Cape. Building fences around collapsing buildings that it is meant to fix is hardly a victory!

2. Coega said it was not aware that the AG’s latest PFMA report revealed that its procurement processes were       uncompetitive or unfair.

At the time of our original article, the AG’s 2015-16 PFMA report was the latest available version. The report showed Coega’s “financially unqualified opinion with findings” under the category “uncompetitive or unfair procurement process”.[2] Although Coega’s financial statements were not falsified[3], it did not receive a clean audit for procurement processes. Coega contravened procurement legislation which exists to ensure that procurement is competitive and fair.

Moreover, in Coega’s own 2016/17 Annual Report, the AG reported significant internal control deficiencies, and highlighted that the board did not always exercise oversight to ensure compliance with procurement legislation.[4] According to the Department of Basic Education’s latest Annual Report, Coega incurred R127 million of irregular expenditure last year alone – enough money to build three schools.

3. Coega said: “Before any bid is awarded, those who submitted bids for that specific tender are afforded an opportunity to appeal…”

Here, Coega referenced its internal appeals process for contractors who were not awarded bids. This is a measure EE supports. Still, this missed our real criticism – that Coega’s procurement is opaque. The public cannot access bid specification documents, or the minutes of meetings of the Bid Evaluation Committee or the Bid Adjudication Committee. These minutes are not even published in a way that allows government departments to track how bid decisions are made.

4. In our original article, EE referenced the DBE’s investigation into allegations that Coega terminated projects even though it had already incurred expenditure. Coega responded, saying: “Payments are made on the basis of department verification of deliverables from the CDC… the department does not advance funds to the CDC for implementation or management fees.”

Payments to Coega for projects for provincial education departments are issued through monthly invoices based on deliverables. However, payment to Coega for DBE projects is made in tranches. The DBE’s latest Annual Report states that management fees of nearly R9 million paid to Coega are under investigation due to allegations that the specific projects paid for were stopped or terminated!

5. Coega said that at Vukile Tshwete Senior Secondary School, there is a project steering committee, project implementation plan, a new fence, and a new site.

Vukile Tshwete Senior Secondary is made almost entirely of wood. According to the Norms and Standards for School Infrastructure, wood is an inappropriate construction material for schools.

In 2015, Coega showed the school governing body (SGB) a construction plan, taking soil samples, photos and assessments of the site where new structures were to be erected. In 2016, Coega built a fence and promised the new structures would be ready that year. At the dawn of 2018, the site is completely empty and learning continues in the dangerous wood structures. Coega now claims that there is an implementation plan with timelines for construction early next year.

“We didn’t see the latest plan. They had plans in 2015, 2016, 2017… now for 2018? Coega has made empty promises. Ms [Thembeka] Poswa, [Education Programme Manager at Coega], said the school would be built by 2016 October,” SGB Chair Zamie Mabamba told EE last month. When asked about the project steering committee, Mabamba said: “We don’t know about that. They are waiting for us to make the steering committee, but we don’t have a document that guides us”.

“The fence is a white elephant. A fence is being built in every school where Coega promises construction will take place,” she said. “Good results don’t come from a fence – they come from teachers who are in a healthy and a conducive teaching environment.”

The fence hugs a completely empty plot of land where new classrooms should be. Hopefully the soil samples taken in 2015 can still be of use.

6. Coega said that at Hector Peterson Senior Secondary School there is a project steering committee, a project implementation plan, and a new fence.

Hector Peterson Senior Secondary was built in 1958. Like Vukile Tshwete, the school received many construction plans from Coega: in 2012, 2015, and again in 2017. After our initial op ed was published in Mail&Guardian, Coega sent consultants there to take soil samples and deliver yet another construction plan.

Coega told Hector Peterson Senior Secondary to set up a project steering committee, but gave little guidance as to how. The committee met only once at the beginning of this year. There is indeed a brand new fence which protects the crumbling infrastructure inside: unstable roofs, exposed electricity wires, and unusable sanitation facilities. The fence raised the school’s hopes that construction would commence, especially given the promise that it would in September 2017.

7. Finally, Coega claimed that Deloitte compiled an independent report on the functionality of the Coega board, and found the board to be highly effective.

The AG’s 2016/17 finding was that Coega’s board was “not always effective”. As far as we’re concerned, a report ought to be commissioned to determine and improve the functionality of the implementing arm of Coega, such that schools can be built in a timely and cost-effective manner. How many soil samples, photographs, site assessments, construction plans and fences do we need to see before the actual construction of schools in the Eastern Cape?

Attempts to brush off EE’s concerns over Coega’s procurement policies, management fees, and overall performance are one thing. It is something else, and wholly unacceptable, that Coega has been dishonest about its engagements with Vukile Tshwete Senior Secondary  and Hector Peterson Senior Secondary. EE has active members in both schools.

We call on Coega to prove its stated commitment to deliver on this round of implementation plans, as well as to improve its communication with frustrated school communities. EE, joined by SGBs, teachers, parents, and committed learners, has grown tired of broken promises and white elephants.