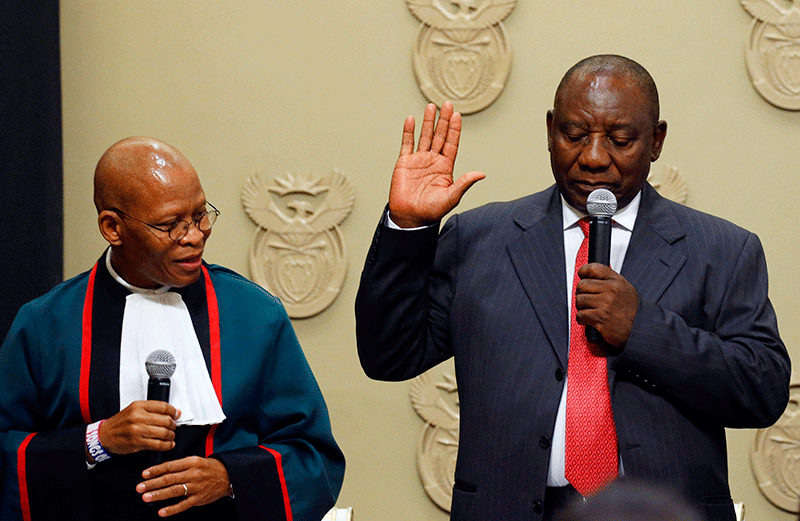 Cyril Ramaphosa’s election as the fifth President of South Africa, carries with it the hopes of millions who seek a better life in an equal and just society.

Ramaphosa takes office in the shadow of nine years of calamitous rule by Jacob Zuma – whose tenure was marked by State capture, spiralling inequality, the hollowing out of crucial State institutions, and the broad dysfunction of government. For over two years, EE through its General Secretary, has demanded that the ANC recall Jacob Zuma, and his cronies. The pursuit of a just, free, and equal South Africa has been undermined by Zuma and his cabal. We do not mourn his departure.

While other youth formations have been silent in the face of the poor governance and looting, we have consistently raised our concerns and mobilised in defence of democracy. When money is stolen or wasted, when borrowing costs go up, and when the tax collection system is destroyed, the building of an equal South Africa is unattainable.

The Presidency must function as the site to advance the struggle for social equality, for the righting of historic crimes against black people, for jobs, houses, healthcare and education.

The excising of the captured leaderships and boards of the Passenger Rail Agency of South Africa (PRASA), the South African Revenue Service (SARS), and the National Prosecuting Authority (NPA) must also feature on the agenda of the new President. These are the institutions upon which a capable State must be built.

Our record is one of fearlessly contesting unjust economic policy, and fighting against white economic supremacy. And this we will continue to do regardless of who the President is. We will persist in the struggle to steer the State towards implementing an economic policy that is redistributive and pro-poor.

Ramaphosa ascends to the Presidency at a time when barriers to the realisation of equal and quality education for all persist. Today, learners will report to schools that have no water, that lack decent toilets, and where teaching and learning takes place without electricity. Hundreds of thousands of learners will walk at least 5km to reach school, but for some the road is up to two hours long. Today, learners will attend schools in which they are vulnerable to frequent violence.

Eight out of ten children are unable to read for meaning after four years of schooling – a crisis that necessitates radical action. Government’s failure to produce a sustainable plan to fund fee-free higher education means that the doors of further learning are shut in the faces of those learners that manage to defy the odds.

Young people bear the brunt of the chronic unemployment. There are not enough jobs. The Youth Wage Subsidy has enriched employers rather than benefited those seeking work.

For the last 10 years, Equal Education has identified problems in the South Africa education system, detailed their solutions, and led campaigns that have resulted in change. With this template, Ramaphosa has the opportunity to take decisive action to improve education. With political will and focus, fundamental improvements are possible.

While the fall of Zuma is a moment of relief, now is not the time for complacency. Young people must continue to fight the parasitic domination of a few that is at the expense of many. Progressive civil society formations must not demobilise. Journalists must continue to shine a bright light in dark corners. We must remain vigilant!

We cannot accept a Presidency that is content with merely repairing what Zuma has broken. South Africa remains a deeply unequal society, scarred by centuries of colonialism and apartheid. Now is the moment for Ramaphosa to prove that he is truly a leader of all South Africans, and to guide our country toward a more equal and just future.

MilaMEDIA STATEMENT: PRESIDENT RAMAPHOSA WE EXPECT MORE FROM YOU THAN JUST CLEANING UP AFTER ZUMA’S MESS02.16.2018