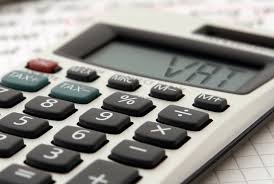 The national budget that Finance Minister Malusi Gigaba yesterday tabled does not take from the rich, to redistribute to the poor. It does not do all it can to advance the realisation of socio-economic rights. Instead, the 2018/19 budget places a disproportionate burden on the poor, in order to plug a shortfall that is a consequence of the destruction of State institutions, including the South African Revenue Service (SARS). Gigaba has been complicit in the ruin of the economy, and he now opts to hike Value Added Tax (VAT) in a bid to fix it. 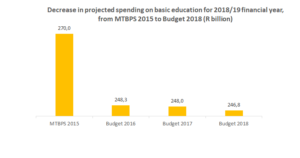 If the baseline funding available for basic education for the 2018/2019 financial year remained at R270 billion, as was predicted in the 2015 Medium Term Budget Policy Statement (MTBPS), the increase in basic education funding from 2017 to 2018 would have been 16.98% . However, given the consistent downward revision of the projected funding, it is only a 6.93% increase. Given the mammoth task ahead of undoing the stubborn legacy of apartheid education – and that service provision will become more expensive with an increase in VAT – the 6.93% increase is barely enough to keep up with inflation.

President Cyril Ramaphosa, in his SONA address, boasted that 187 schools have been completed under the ASIDI programme since 2011 – this is embarrassing. ASIDI was supposed to have completed 510 schools by 2014! Decreasing the size of grants that must provide learners with dignified and safe learning environments is not the solution to this gross underperformance.

These cuts must be reversed, and the national Treasury must simultaneously support provinces to spend their budgets. Treasury’s intervention should incentivise transparent and effective infrastructure planning, and include the creation of stronger financial mechanisms to monitor and sanction implementing agents – those that build schools on behalf of departments of education.

Ramaphosa also stated during his SONA: “If we are to break the cycle of poverty, we need to educate the children of the poor”.  A Presidency committed to doing so would not preside over a decline in grants that clearly and intuitively benefit poor Black learners in predominantly rural areas.

Yesterday Minister Gigaba announced that R57 billion would be re-allocated  to fund fee-free higher education for poor and working class students over the medium term, make Higher Education and Training the fastest growing line item on the budget at 13.7%, outgrowing debt servicing by 4.3%!

The National Student Financial Aid Scheme (NSFAS) will be the primary vehicle through which fee-free tertiary education is rolled out. EE welcomes this reinvestment in NSFAS because it means that the responsibility to fund this sector remains with the State, as opposed to the pro-privatisation models proposed by  the Heher Commission: the Income-Contingent Loan Model (ICL) and the Ikusasa Student Financial Aid Programme (ISFAP), both of which are detailed here. The  dramatic re-prioritisation of NSFAS is in contrast to dwindling allocations, as illustrated below: 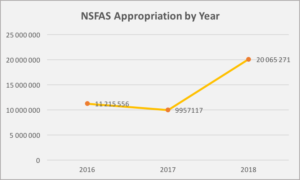 What is a cause for concern is that this reallocation comes on the heels of the baseline reduction to the basic education budget, and a R3.6 billion reduction to school infrastructure grant allocations over the medium term economic framework (MTEF) period. This is truly regrettable, considering the interdependence of the basic and higher education sectors.

Exorbitant fees are not the only reason that tertiary education remains out of reach for the vast majority of learners in our poorest schools  – it is also due to the inadequacies in the early years of schooling.

For most South African learners, passing matric well and potentially obtaining a higher education qualification is already largely unattainable by the time these learners reach the end of Grade 3.[3] The 2016 Progress in International Reading Literacy Study (PIRLS) revealed  that after four years of schooling, a staggering 78% of South African learners cannot read for meaning.  Research on the prospects of upward mobility for our poorest learners shows that South African schools “exert an extra downward pull, keeping those at the bottom near the bottom.”[4]  Fee-free higher education, as a pro-poor intervention, is too late to impact the life trajectory of those learners.

As a movement constituted primarily of school-going youth, Equal Education members do not tire of the struggle to ensure that those in power fulfil their mandate to provide quality basic education for all, regardless of economic standing. These values are undoubtedly the values that underpin the call of students for fee-free higher education for the poor.  We have also called for greater funding and better administrative support to Technical and Vocational Education Training (TVET) institutions and Historically Black Universities (HBUs). We must however attain this without a negative impact on other crucial social spending.

The 2017/18 financial year saw SARS incur a crippling R48.2 billion revenue shortfall.[5] This failure to collect income taxes – an income stream comprising 37.1% of government’s revenue – has put South Africa in a precarious economic position. National Treasury’s scramble to finance the budget deficit has resulted in measures that will adversely affect poor South Africans the most.

One attempt at plugging the hole in the national fiscus is a value added tax (VAT) increase –  a regressive measure. It is the antithesis of a tax system that aims to build a cohesive and inclusive society through progressive taxation and redistributing resources.[6] Equal Education rejects an increase in VAT.

The broad-based VAT increase is intended to produce a more efficient tax system that will improve revenue collection. When it comes to paying VAT, low income households carry a relatively greater tax burden than more affluent households, as they spend a larger proportion of income on basic goods. To mitigate the effect of a VAT increase on these households, a list of zero-rated basic products (goods charged at 0% VAT) was developed. Gigaba has also tabled increases in the old age, child support, and disability and care dependency grants to offset the effect of the VAT increase. However, this does not fully alleviate the additional pressure on impoverished families considering how small the grant increases are, and the limited list of 19 zero-rated basic products.

Many necessary goods that poor households tend to buy fall outside the basket of zero-rated goods. These include products such as poultry, bread flour, white sugar and pay-as-you-go airtime.[7] There is a need to revisit the classification of goods as luxury or necessity to more adequately account for spending patterns in poorer households. Furthermore, households with school-going children will be impacted by increases in the cost of school uniforms, and menstrual hygiene products which are already largely unaffordable for low-income learners. The cost of providing education will also increase as the prices of textbooks and materials for building schools rise. Education-related goods should therefore also be considered for zero-rating. 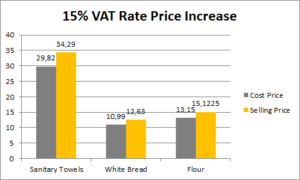 Given the high levels of inequality in South Africa[8], it is deeply concerning that Treasury is proposing a tax collection measure that is anti-poor. The question still remains whether a VAT increase and accompanying attempts at mitigating its effects on the poor is the best option, when one considers that there are other ways of closing the revenue gap.

One alternative option is increasing Corporate Income Tax (CIT) – a tax imposed on companies resident in South Africa, or those which are effectively managed in, and which derive income from within the country[9]. South Africa’s Corporate Income tax (CIT) rate is the fifth lowest in Africa[10], and according to the graph below, South Africa has a disproportionately large disparity between CIT and personal income tax (PIT) compared to other countries: 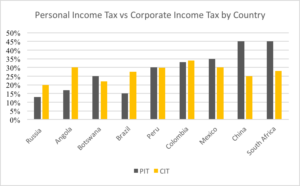 Adapted from: Studies in Poverty and Inequality Institute (SPII)

Equal Education is concerned that the Minister of Finance and National Treasury opted to increase a tax that directly affects the poor, when an increase in CIT would result in a revenue of billions of rands, and would not put strain on poor and working class families in the way that an increase in VAT will. According to research by a Wits University economist: “In 2015, effective [CIT] tax rates of 30%, 32% and 35% would have raised an additional R13 billion, R26 billion and R45 billion respectively (although this is likely to be somewhat less due to avoidance and/or a fall in taxable profit).”[13]

It is further imperative that the administrative capacity of SARS to collect taxes be urgently addressed –  any internal corruption must be rooted out and dealt with decisively. The revenue collector’s ability to clamp down on tax avoidance and tax evasion by corporates and wealthy individuals must also be strengthened so that there is never a repeat of last year’s revenue shortfall.

[14]If this administration will truly be one that does not put profit above people, it will reconsider its decision to increase VAT, when other, more equitable and possibly more effective forms of revenue collection exist. Moreover, President Ramaphosa and Minister Gigaba must prioritise social spending and ensure that, in an attempt to grow the economy, they do not force financially vulnerable members of society to compete over shrinking resources.

[3] Van der Berg, S. “What the Annual National Assessments can tell us about learning deficits over the education system and the school career year”. Stellenbosch Economic Working Papers: 18/15. Department of Economics University of Stellenbosch, 2015.