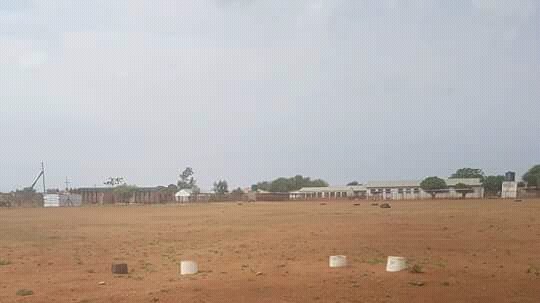 Today, at Mmababada Primary in Limpopo there are no toilets accessible to learners. The 425 learners share four buckets placed around the school. When the buckets fill up, learners relieve themselves elsewhere on the school premises, in the open. “There is human faeces everywhere,” says Thinavhuyo Daphney Tshikungulu, Chairperson of the school’s governing body (SGB). Tshikungulu explained  that learners are getting sick because of exposure to human waste. Astoundingly, there are four blocks of newly-constructed ventilated improved pit latrines (VIP pit latrines) on the Mmababada Primary premises – but they are bolted shut. The company that was subcontracted to build the toilets says it was not paid, and so it refuses to unlock the new toilets.

Premier Mathabatha, please explain to us, in your SOPA, how you will immediately intervene to put a stop to this violation of the right to dignity, and of the school infrastructure law. Please detail your action plan for monitoring the procurement practices and service delivery of government departments and school infrastructure implementing agents, and for sanctioning those whose incompetence and willful failure impacts on the learning experience of children in this manner.

Why did this happen?

The national  Department of Education (DBE) and Limpopo Department of Education (LDoE) – like all other provincial education departments (PEDs) –  do not usually hire contractors themselves.[1] Due to a lack of technical and project management capacity, the PEDs allocate construction projects to entities which are called implementing agents (IAs). IAs provide  technical support to departments, handling everything from project planning to procurement of contractors. IAs can be government departments (such as Public Works), State-owned enterprises, public entities, and nonprofit organisations. In the case of Mmababada Primary, the IA is Mvula Trust, a nonprofit organisation.

It is wrong, unlawful and unconstitutional, for the subcontractor to punish the learners at Mmababada Primary School bylocking the toilet doors. Even from a purely private law perspective, contractors must pursue their claim against an IA or government department without taking the law into their own hands. More than this, when it takes on a duty relating to the dignity, health, safety and education of children, a private contractor must not conduct itself in a way that threatens or violates these rights. However, effective oversight by various arms of the Limpopo government, especially the LDoE and the Limpopo Treasury, could definitely have prevented this situation.

The effective appointment and monitoring of IAs:

The bodies authorised to exercise oversight over IAs are the Construction Industrial Development Board, PEDs and the DBE, Provincial Treasuries, and National Treasury. The Head of Department (HOD) of PEDs decides which projects to allocate to a particular IA.  The Provincial Treasury, through it’s infrastructure unit, must ensure that PEDs oversee their mandate by working closely with National Treasury to monitor compliance with procurement standards.

The Mvula Trust  is one of the LDoE’s most frequently used IAs. In the 2015/2016 financial year, the most recent year for which records are available, Mvula Trust  was responsible for projects to the value of R266.86 million for the LDoE.[2] Of the 253 schools that  Mvula Trust was supposed to supply with sanitation facilities that year, it supplied only 57. The Mvula Trust Limpopo branch incurred R31.39 million of irregular expenditure in the 2016/2017 financial year.[3]

Premier Mathabatha, it is your province in which 5-year-old Michael Komape died, because despite several pleas from the principal to the LDoE, the toilets at his schools had not been fixed. The LDoE’s Annual Report from 2012/2013 says that none of the 66 planned  toilet upgrades for that year took place because of “late signing of service agreement with implementing agents.”[4] This was the same year in which Michael fell into a dilapidated pit latrine and drowned.

The Limpopo Treasury and the LDoE must justify the LDoE’s choice of IAs. When deciding on which IA to appoint to a project, the LDoE must take into account the current capacity of an IA to complete the workload, including the number of programme managers and project managers which the IA has on staff or is prepared to hire. Furthermore, the consequences for IA and contractor transgressions in spending should be made clear.

Project lists must be publicly released:

Information on which IA and which contractors are  appointed to a project, who put in bids for a project, and how those bids are evaluated is very difficult to access. As such, when a construction project is done poorly, school communities have no access to information about the project and thus no way to hold the relevant authorities accountable. Provincial departments are required to submit Infrastructure Reporting Model (IRM) reports to Provincial Treasury on a monthly basis. These reports include the progress of all school projects, the stage of the project, and which IAs are working on them. Provincial Treasury and HODs must divulge the information included in the IRM reports to the public to allow for greater accountability.

Similarly, the Norms and Standards regulation compel MECs to provide yearly updates on the progress of fixing school infrastructure to Basic Education Minister Angie Motshekga, but there is no provision for making these accessible to the public. In March the Bhisho High Court will hear EE’s legal case challenging various unconstitutional aspects of the regulations, including the absence of this type of mechanism for openness and accountability.

Steering committee meetings must be held:

Steering committees must be prioritised as key governance structures for successful project implementation. Schools must be assisted in creating steering committees. IAs and government must ensure that meetings are spaces where schools are updated on construction progress.

What does this tell us about governance in Limpopo ?

Last year, Equal Education visited 18  schools in the Capricorn District in Limpopo to assess the water and sanitation conditions at those schools. Our report released after the school visits, titled Dikolo tša go hloka seriti (Schools Without Dignity), shows that the situation at Mmababada Primary is not an outlier.  Eleven of the 18 schools we visited had plain pit latrines only, and therefore no access to sanitation in terms of the Norms and Standards for School Infrastructure.  Not one school we visited had enough usable toilets to meet what is required by the Norms and Standards  At one school a construction company had constructed toilets so poorly that they were deemed dangerous for use and locked by the school. At another, a construction company had abandoned the project mid-way after not being paid, leaving ruble and cement foundations, but no toilets!

Our report also details how lack of capacity and ensuing mismanagement in the LDoE has led to poor project and procurement planning. This, in turn, has led to widespread non-compliance with supply chain management [SCM]  legislation[7], substantial amounts of irregular expenditure[8], and the failure of the LDoE to build, repair, upgrade and maintain the province’s schools.

The 2016/17 Auditor General PFMA report cites R2,087 billion irregular expenditure by the Limpopo government and states that “the political and administrative leadership needs to take decisive steps to enforce zero tolerance for deviations from SCM processes, and consequence management should be implemented to deter the disregard of regulations.”[9] Equal Education wants Premier Mathabatha to today  acknowledge the great deal of work that lies ahead if Limpopo is to ensure that procurement is fair, equitable, transparent, competitive and cost-effective.

The way that these processes unfold reveal whose interests a government has at heart. When provincial departments and IAs fail to follow competitive procurement processes, when contractors are allowed to perform poorly with no threat of sanctions, when ownership of construction projects is snatched from communities, it is learners like those at Mmababada Primary who suffer. 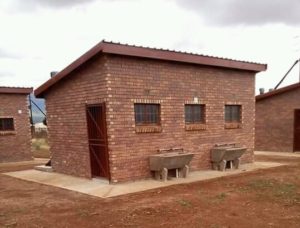 A newly-constructed block of ventilated improved pit (VIP) latrines at Mmababada Primary in Limpopo has been bolted shut due to non-payment. 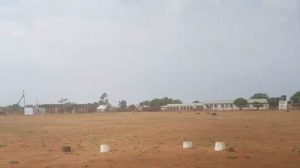 Four buckets are used as makeshift toilets for over 400 learners at Mmababada Primary in Limpopo.

[1] PEDs do deal with contractors directly in emergency and disaster situations, or when some small maintenance projects are needed.

[7] The procurement and monitoring of contractors, whether by IA or Provincial HODs, forms part South Africa’s Supply Chain Management (SCM) policy.  SCM is concerned with the oversight, coordination, and monitoring of inputs, outputs, and outcomes of projects.

[8] The 2016/17 Auditor General PFMA report cites R2,087 billion irregular expenditure by the Limpopo government, R892 million of which can be attributed to the LDoE.