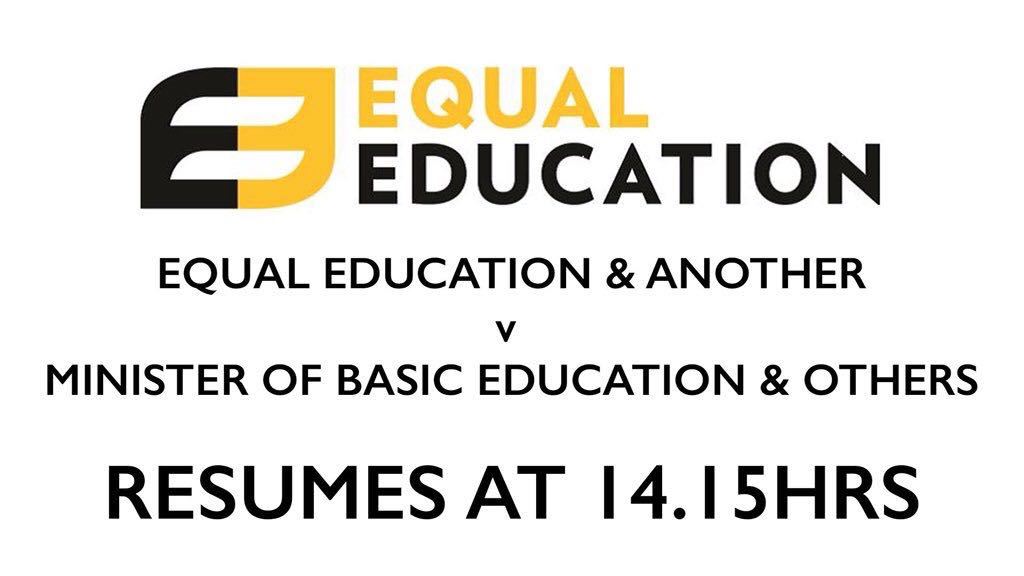 The hearing of our #FixTheNorms court case resumes in the Bhisho High Court today.

This case is of national importance. If the court agrees with Equal Education, it will mean that the country’s law on school infrastructure will be tightened, and there will not be any excuse for any failure by the nine provinces to comply with the deadlines which the law sets for providing essential infrastructure at schools.

Basic Education Minister Motshekga must #FixTheNorms in order to #FixOurSchools.

The law, formally known as the Minimum Uniform Norms and Standards for Public School Infrastructure, was promulgated on 29 November 2013. Its promulgation followed years of campaigning by EE members, delays and broken promises by Minister Motshekga, and a court endorsed settlement agreement. This case is about fixing the unconstitutional and unlawful loopholes and gaps in the school infrastructure law.

We chose to have this case heard in the Bisho High Court, rather than anywhere else in South Africa, because the Eastern Cape is the province with the worst infrastructure backlog.

We still see too many schools with pit latrines, mud walls, and asbestos ceilings. And we still see schools with unreliable supplies of water and electricity. Schools must be properly fixed, and learners cannot wait indefinitely for basic infrastructure. That is why we are now back in court.

On the first day of hearings yesterday, Acting Judge Mzizi heard arguments from Equal Education on the State’s severe misunderstanding of its constitutional obligations.  Basic Education for All (BEFA), who have joined the case as a friend of the court (amicus) and are being represented by Section27, emphasised the impact that the State’s approach and poor infrastructure has on learners. Counsel for Minister Motshekga closed the day with arguments seeking to defend the Norms in its current form.

We are back in court today as argument continues.

Here is our previous statement on this week’s court case.

*Use #FixTheNorms and #FixOurSchools for updates from inside the Bhisho High Court on social media. Proceedings will be accessible via livestream on the Equal Education’s Facebook and Twitter.