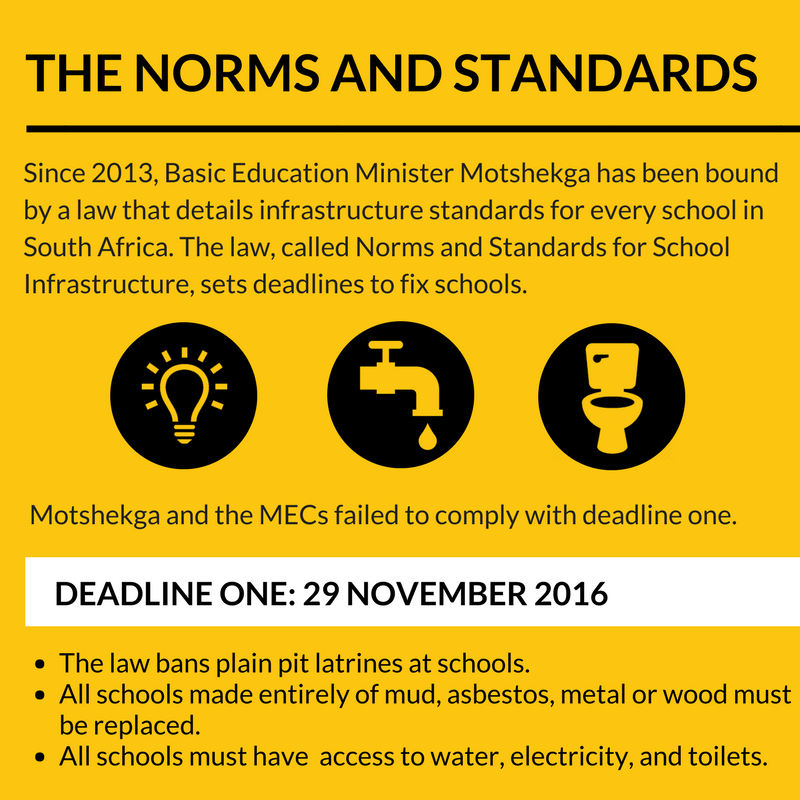 Since the beginning of the 2018 school year, Equal Education’s Eastern Cape team has visited 20 schools in King Williams Town, Dimbaza, Mount Coke and Zwelitsha. The conditions are dire.

We discovered schools with plain pit latrine toilets, and one at which the pit latrines were hurriedly demolished in anticipation of a visit by members of the Eastern Cape Legislature. At Xolani High School, situated next door to the offices of the Eastern Cape Department of Education (ECDoE) in Zwelitsha, we encountered classes of 70 learners, and flush toilets without any doors or seats.

We were particularly disappointed at what we found at Hector Petersen High, and Vukile Tshwete Senior Secondary. In November last year, the Coega Development Corporation (CDC) made promises about these schools in an opinion piece published by the Mail & Guardian newspaper. Coega is a State-owned entity which acts as the implementing agent for the ECDoE in the building and fixing of schools. The opinion piece by Coega was in response to us publicly calling Coega out for poor performance.

To quote Coega: “Vukile Tshwete Senior Secondary School and Hector Petersen High School — both have implementation plans with milestone timelines. Project steering committees, which include the education department, members of the school governing body and the school principals, are established to support the CDC [Coega]… Vukile Tshwete fencing and new site is complete, with construction to commence early in 2018. The Hector Petersen fencing site has been practically completed, with construction to commence in early 2018.”

We stand by our criticism of Coega, and we restate what we said in December last year: there is no evidence of Coega fulfilling its work at these schools.  The principals do not have the implementation plans in their possession, parents are not part of the steering committees, and classrooms have not been repaired. No building has commenced.

In the past six years, Hector Petersen High and Vukile Tshwete Senior Secondary have received three different sets of construction plans from Coega.

In mid-2017 Hector Petersen High was given what the school  was told was the final plan for a new building.  However, in January this year, during the Eastern Cape Legislature’s oversight visit to the school, it emerged that building was delayed  because the plans had suddenly changed from a single-story building to a double-story building. This was to the surprise of the school governing body. No one was in possession of the new plans.

As at the end of last month, the principal of Vukile Tshwete Secondary had no communication with  Coega, despite assurances that building would begin at the start of this year. There have been no construction workers or machinery. There is still no active steering committee. The school remains built of wood – dilapidated and dangerous – and a few weeks ago part of the ceiling of a classroom collapsed onto the desk of an Equaliser.

How will Coega spin its falsehoods now? The ECDoE is meant to be holding its implementing agents accountable – how is it acting to sanction this poor performance?

It seems the tone for 2018 has been set by Coega and the ECDoE:  another year of broken promises.

President Ramaphosa, and Basic Education Minister Motshekga, include that in your “audit”. You may also want to include the data from our previous audit report of Eastern Cape schools, or the letters from EE learner members that Eastern Cape Education MEC Makupula has bluntly refused to accept.

We demand that the the national and provincial education departments exercise greater oversight over implementing agents, and that severe penalties are put in place for those who fail to perform efficiently and effectively. The leadership of the departments must provide detailed information to the public on precisely what is being done to put an end to the poor performance of implementing agents.

We will continue to work toward ensuring that the Eastern Cape’s forgotten schools are provided with what they are morally entitled to, and legally entitled to in terms of the Norms and Standards for School Infrastructure.