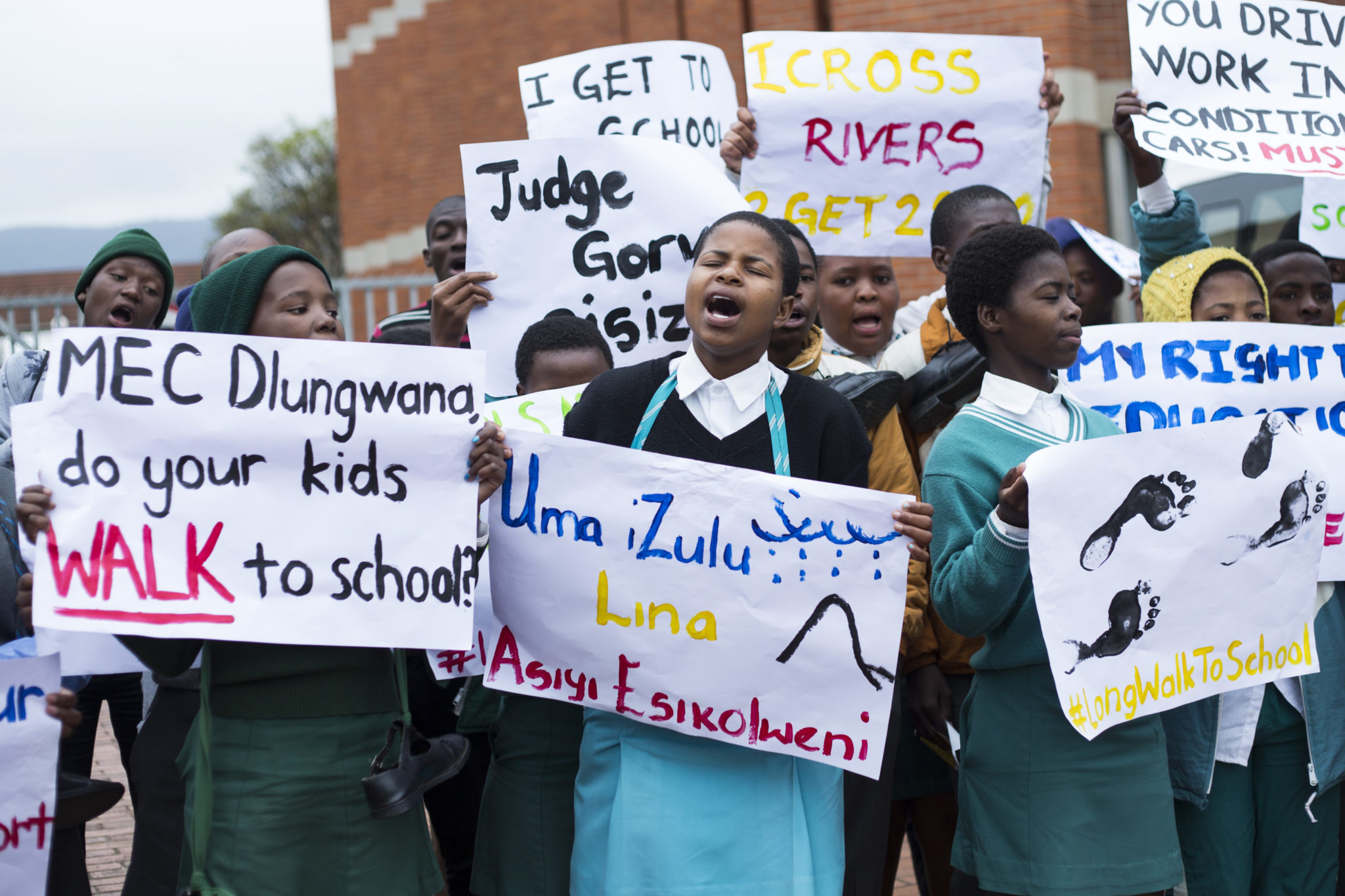 Equal Education (EE) secured a momentous victory earlier this year when 12 schools in Nquthu, KwaZulu-Natal (KZN), were provided with scholar transport. We now continue our call for systemic solutions to address the  enormous need for scholar transport in the province, and South Africa more broadly.

As part of ongoing court processes, we have filed a response to the  KZN Department of Education (KZN DoE) report to the court, recognising the important steps that it has taken, but also noting significant gaps that remain.

In November 2017, the KZN DoE and KZN Department of Transport (KZN DoT) undertook to provide scholar transport to the 12 schools and to report back to the Pietermaritzburg High Court on 1 April on their plans to address the lack of reliable, safe and free scholar transport throughout the province. This undertaking was made an order of the court.

While the KZN DoE and the KZN DoT contend that financial constraints impact their ability to immediately address the need for scholar transport throughout the province, we have requested in our responding report that the KZN DoE provide detailed plans to address this need in the long term, and provide timelines indicating when the need is expected to be met.

We expect the KZN DoE to file a response to our questions with the Pietermaritzburg High Court tomorrow.

The #LongWalkToSchool campaign has its roots in the experiences of EE members attending schools in Nquthu, who testified to walking great distances on foot to and from school, often over difficult and dangerous terrain – in severe heat or rain, and vulnerable to theft and sexual assault.

Alongside our work in KZN, EE also continues to engage on this issue nationally. Our demand is that all learners around the country who walk long and dangerous routes to school must – as a component of their rights to education, safety, dignity and equality – be provided with government-subsidised scholar transport.

We have already secured important national victories including the publication of the National Learner Transport Policy, and a public commitment from the national Department of Basic Education (DBE) to work with National Treasury to explore the introduction of a conditional grant to fund scholar transport.

A conditional grant will prevent the shifting of funds allocated specifically towards scholar transport to other programmes, because the money will be ring-fenced. It will also make it easier to monitor allocations, expenditure and whether deliverables are met. Finally, a conditional grant will allow increased funding for scholar transport to be allocated in proportion to unmet needs in each province.

The victories we have achieved so far are an important testament to the commitment of EE’s members who have tirelessly campaigned since 2014 to highlight the urgent need for reliable, safe and free scholar transport. The KZN DoE, DBE and National Treasury need to ensure that scholar transport is not a barrier to learners accessing education. It is alarming when learners and teachers report that a lack of scholar transport contributes to high incidences of late-coming, absenteeism and to learner dropping out of school completely. This infringes learners’ Constitutional right to basic education, a right we must fiercely protect.

*Equal Education is a membership-based, mass social movement. Our members are primarily high school learners, in five provinces. We work toward achieving quality and equality in the South African education system, through activism and research.