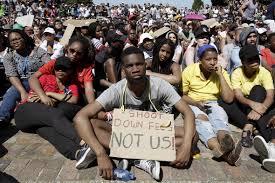 Media statement: Equal Education statement of support for #FeesMustFall activists to be pardoned

At our 3rd National Congress held earlier this year, Equal Education (EE) delegate members affirmed our solidarity with the struggle of post-school youth in higher education institutions. It was at our 2nd National Congress, held in 2015, that we resolved:

As a youth-led movement advocating for an equal and quality education system in South Africa, we support the call for #FeesMustFall activists who have been indiscriminately arrested and prosecuted to be granted amnesty by the State, because their fight is for what was promised to South Africa’s youth.

In the Constitutional Court yesterday, EE was present as amicus in the #SJC10 case, as part of defending the #Right2Protest. Were it not for apartheid-era laws such as the Regulation of Gatherings Act (RGA), students fighting for free education wouldn’t be criminalised. The criminalisation of #FeesMustFall activists undermines the struggle of young people in this country. We condemn the State’s efforts at curtailing and criminalising protest action.

Throughout our country’s history, youth activism has consistently been undermined by the State – if we are not killed, we are sentenced to prison, or otherwise victimised for fighting a just cause. It is absurd  that students are prosecuted by a government that has committed itself to providing free higher education.

EE’s post-school youth members are part of the movement as facilitators – the engine of our movement – who run socio-political programmes in schools in five provinces on a weekly basis. Among our post-school youth members, some are enrolled at tertiary institutions, and on these campuses are able to apply the organisational principles and values of youth activism learnt through being EE members. The experiences of our members at these institutions makes our solidarity with the #FeesMustFall even more important.

We recognise, through interactions with Fallists, students and workers that they may have done some things differently over the 2016 to 2017 period. But with that said, we stand behind the call for the release of students that have been jailed because of their activism during this time.

Parents, teachers, learners, post-school youth and staff of EE support and stand alongside students today, and in the future, as they take to the streets to plead with our country’s leaders to release our brother and sisters from jail, and commit to supporting and engaging education movements in the country.

We want access to free, quality and decolonised education in our lifetime!

Leanne Jansen-ThomasStatement: Equal Education statement of support for #FeesMustFall activists to be pardoned08.22.2018