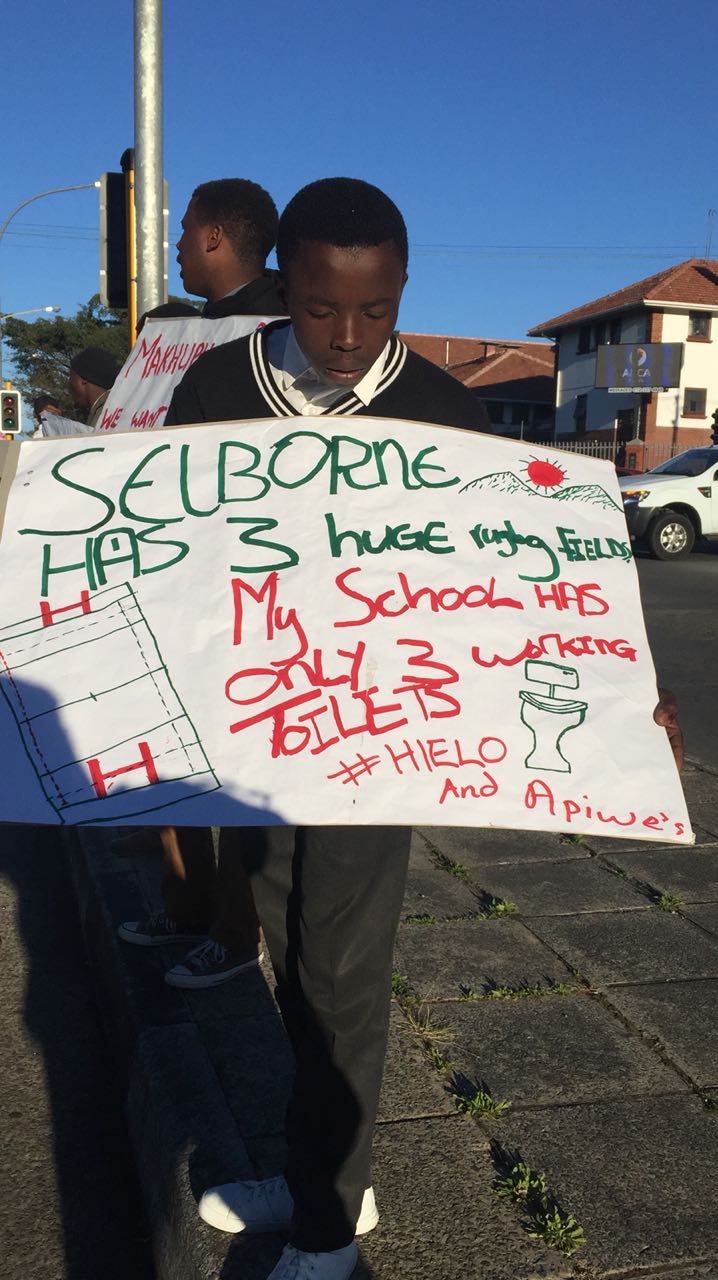 This morning, Equal Education (EE) learner members (Equalisers) and EE post-school youth members held a demonstration outside Selborne College in East London. We did this to remind government of its Constitutional duty to provide infrastructure that is safe, that protects learners’ dignity, and that is conducive to quality teaching and learning, to all of South Africa’s learners. Our demonstration was to again demand that government #StopTheAppeal.

EE members are deeply hurt and frustrated that the Minister of Basic Education Angie Motshekga and all nine Education MECs are appealing the Bhisho High Court judgment of 19 July 2018, which prevents government from dodging its duty to #FixOurSchools within the deadlines stipulated by the Norms and Standards law.

The children of Ministers and MECs attend well-resourced schools that foster quality teach and learning. But Eastern Cape learners, who are dependent on a public education system that MEC Makupula is responsible for, are exposed daily to school infrastructure that threatens their futures and their lives.

The Eastern Cape has the second highest number of plain pit latrines in schools in the country (1 722). The need to address this crisis cannot be overstated, particularly when taking into account the danger they pose to learners and teachers.

Two weeks ago, President Cyril Ramaphosa launched the Sanitation Appropriate for Education (SAFE) initiative, due to the need to urgently eradicate plain pit latrines across public schools in South Africa. After the death of Lumka Mkhethwa in March 2018, the President called on Minister Motshekga to conduct a comprehensive sanitation audit across all schools, as well as provide him with a costed plan.  The audit and plans should have been compiled in previous years, after the promulgation of the Norms and Standards in November 2013. Did the Minister then, not recognise the urgency needed to eradicate plain pit latrines and replace them with appropriate sanitation facilities, before the President’s call?

With the lodging of the appeal, government not only argues that it is not obliged to urgently fix schools, but demonstrates its unwillingness to publicly release school infrastructure improvement plans timeously. We obtained the Eastern Cape report via a Promotion of Access to Information Act (PAIA) application.

As a result, we cannot reconcile President Ramaphosa’s SAFE Initiative, with his government’s appeal of the Bhisho High Court judgment.

We appeal to MEC Makupula, and also to Eastern Cape Premier Phumulo Masualle, to withdraw support for the appeal.