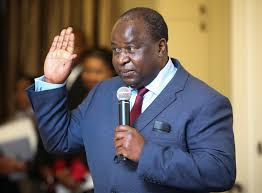 Equal Education (EE) calls on newly appointed Minister of Finance, Tito Mboweni, to reverse major cuts to basic education funding in his maiden Medium Term Budget Policy Statement (MTBPS) tomorrow. The 2018/19 budget announced decreases to school infrastructure grants by approximately R7 billion over the medium term, and reduced the Department of Basic Education’s budget by 8%[1] – a first since its establishment in 2009.

Last year’s R48.2 billion revenue shortfall along with former President Jacob Zuma’s fee-free announcement, which resulted in a need for increased allocations towards higher education, put tremendous pressure on the fiscus. This prompted former Minister of Finance, Malusi Gigaba, to announce increases in taxes, including Value Added Tax (VAT) and the fuel levy, in his 2018 budget speech. Allocations towards social spending, particularly much needed infrastructure grants for schools, government-subsidised housing, and municipal services such bulk water services were cut.

These budget decreases and tax increases form part of broader austerity measures that will, without a doubt, continue to hamper South Africa’s ability to provide basic socio-economic services to those who  need them most.

With regard to basic education spending, there has been a decade-long trend of regressive budgeting. Education economist Nic Spaull, shows that South Africa’s spending per learner has gradually decreased since 2010. In 2010 the state spent R17 822 on average, per learner. This decreased to R16 435 in 2017, and is projected to drop further to R15 963 by 2019 (all in 2017 rand).[2] These cuts will have the most severe impact on poor, mainly rural, black learners, further reducing their already slim chances of receiving quality education.

Last week, the United Nations Committee on Economic, Social and Cultural Rights, a body holding the South African government accountable to its commitment to deliver socio-economic rights, expressed its concern over these austerity measures, noting  that cuts to social spending could “further worsen inequalities… and even reverse the gains made, particularly in the health and education sectors.”[3] The Committee further urged the South African government to improve school infrastructure “by allocating a sufficient level and effective management of funding.”

The effects of budget reductions, are exacerbated by the unacceptably slow delivery of school infrastructure by both the national Department of Basic Education (DBE) and provincial education departments (PEDs).

Along with the MTBPS, the Minister of Finance will also table the Adjusted Estimates of National Expenditure (AENE).[4] The 2017 AENE showed that, within the first six months of the previous financial year, 2017/18, the DBE had only managed to complete three of the 115 schools meant to be built through the Accelerated School Infrastructure Delivery Initiative (ASIDI).

In the same time-frame, only four of 257 schools were provided with sanitation facilities through ASIDI, and only one school out of 344, was provided with water.[5] The DBE stated that these dismal numbers were attributed to poor performance by implementing agents and difficulties in replacing those that underperform.

As a result of overall slow delivery, R415 million of the education infrastructure grant – which is allocated to provinces – was declared unspent.

The DBE continued to drag its feet in the second half of the 2017/18 financial year. Its 2017/18 Annual Report, released earlier this month, shows that only 12 out of 115 schools were built, 29 of 257 sanitation projects were completed, and 43 of 344 schools were provided with water, through ASIDI. Alarmingly, rather than urgently address delivery challenges the Annual Report suggests that targets will be revised to be more ‘realistic’ in the 2019/20 Annual Performance Plan. This is a pattern EE has seen over the lifespan of ASIDI. The DBE continues to lack the urgency needed to fix unsafe structures and address school infrastructure backlogs.

During a Parliamentary meeting earlier this month, the Auditor General of South Africa reported to the Portfolio Committee on Basic Education that the DBE’s financial audit opinion has regressed significantly compared to previous years and this was attributed to the ASIDI programme. Of the four targets set by the Department for the programme, they achieved zero of these targets in the 2017/18 financial year.[6]

We will be looking to Minister Mboweni to address these issues in his speech tomorrow. Education and broader social funding cuts must be reversed and measures must be put in place to ensure that government departments spend allocations efficiently and timeously. South Africa simply cannot afford to continue underfunding a sector as fundamentally important as education.

EE will provide further analysis once we have had time to carefully consider the Minister’s speech and new budget proposals.

[2] See: N. Spaull ‘Basic Education being thrown under the bus – and it shows in test results’.16 April 2018. Aavailable at: https://www.businesslive.co.za/bd/opinion/2018-04-16-basic-education-thrown-under-the-bus–and-it-shows-upin-test-results/.

[4] The Adjusted Estimates of National Expenditure (AENE) provide an update of the current financial year’s expenditure patterns and progress on performance. In addition the AENE shows revised spending and performance projections.