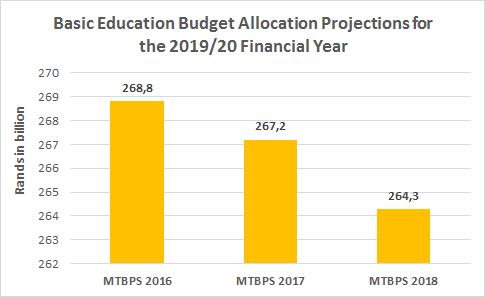 Despite making bold statements about the importance of education, Finance Minister Tito Mboweni’s 2018 Medium Term Budget Policy Statement (MTBPS) provided little relief to the already constrained basic education budget. Allocations to infrastructure grants continue to decrease over the medium term[1] and the total basic education budget is growing at a slow rate, when inflation is taken into account. The commitment to provide sanitary pads in schools, while encouraging, is misleading because government has not indicated any measures to ensure that increased allocations are actually spent on this.

With a revenue shortfall of R27.4 billion, a higher than projected debt to GDP ratio and economic growth revised down from 1.5% to 0.7%, South Africa’s economic outlook paints a bleak picture. Debt is expected to increase by R4.9 billion in 2019/20 and R7.9 billion in 2020/21, making debt-service the fastest-growing expenditure item in the budget. Government’s increasing borrowing requirements are both alarming and concerning given the economy’s almost stagnant growth.

Although we acknowledge the difficult fiscal position South Africa finds itself in, it is disappointing that President Ramaphosa’s government has not considered alternative avenues to tackle austerity in order to promote the advancement of socio-economic rights, especially education.

Equal Education (EE) welcomes Minister Mboweni’s explicit acknowledgement that “[n]obody should learn in a school that is unsafe” and that “[o]ur children must have access to adequate sanitation. We have committed to eradicating pit latrines at schools.”[2] He also reiterated the President’s instruction that a programme must be developed to provide safe sanitation.

It is encouraging that EE’s decade long fight to highlight school infrastructure challenges is being recognised by government. However, Minister Mboweni’s speech did little to make his commitment a reality. While he did not announce any further cuts to the education infrastructure grants, the R800 million that has been re-prioritised towards school infrastructure, provides little reprieve after the 2018 budget announced a  R7 billion budget cut to infrastructure grants over three years. The irony of the Minister’s promise in the wake of the same government’s decision to appeal a court order compelling it to implement the Norms and Standards for School Infrastructure, also cannot be overstated.

The EIG was also impacted by the cuts, with next year’s allocation reflecting a decrease of 0.9% in real terms.[3]

These budget reductions are undoubtedly impacting government’s ability to deliver desperately needed school infrastructure and address the dire circumstances under which thousands of learners, especially those in rural provinces, are expected to learn.

However, the problem of slow infrastructure delivery is one that additional funding alone cannot fix.  ASIDI, for example, has performed dismally over the past three years:

One issue, as illustrated in Table 1, is that education departments have a history of underspending their allocations, resulting in budget reductions. Since its inception, spending of the SIBG has averaged at

While the spending on both the SIBG and EIG improved over the 2017/18 financial year, there is still a concern about the efficiency of that spending. The Eastern Cape, for instance, spent 100% of its EIG allocation, but only met 29.6% of its targets. Limpopo spent 97.3.1% of its EIG allocation, but only delivered on 23.1% of its targets. A further issue is that some provinces have irregularly diverted ring-fenced EIG funds towards other priorities, negatively impacting their ability to deliver school infrastructure.[6]

There needs to be a concerted effort to provide both the national and provincial departments of education with the necessary support, to overcome governance and administration challenges. The Financial and Fiscal Commission also points to the need for more effective oversight over basic education conditional grants, and more effective/stringent penalties for implementing agents[7] who perform poorly.[8]

Poor governance not only inhibits government’s ability to meet school infrastructure targets, but also result in the loss of desperately needed money through irregular and wasteful expenditure.

The 2018 MTBPS boasts that “[a]fter debt-service costs, education is the fastest-growing area of expenditure.”[9] However, a closer look reveals that this is not actually the case. The “Learning and Culture” budget line-item being referred to includes basic education, higher education and arts and recreation. When considered on its own, the basic education budget is actually growing slower than a number of other budget priorities.  In fact, it is only set to grow by 1.2%, in real terms, next year.

Projections for allocations to basic education in the 2019/20 financial year have also been consistently downwardly revised. Based on current projections, we are likely to be spending R4.3 billion less on education next year than what our plans reflected in 2016.

Victory for women as sanitary pads are zero-rated

It is indeed a major victory for women all over the country that sanitary pads have been zero-rated. However, we are disappointed that school uniforms were not similarly zero-rated as recommended by the Independent Expert Panel.

We also note the announcement that the Department of Women has developed a framework to provide free sanitary towels to learners from low-income households, and that this will be funded through increases to the provincial equitable share. But Minister Mboweni’s announcement is misleading. Allocations to the equitable share are not ring-fenced, which means there is no guarantee that such funds will be be used specifically for the purpose of providing sanitary towels, or even for any education purposes at all.

EE has noted the negative impact that poor sanitation facilities and a lack of access to menstrual hygiene products has on girls in poorer schools; with first-hand accounts gathered of learners missing school due to menstruation.[10] We will monitor the roll-out of this in schools with interest and engage with our members to assess whether it reaches affected schools.

Against a background of social funding cuts, it is particularly disappointing to see that funding that could have been allocated to education and other social sectors, is being spent to clean up governance failures. Instead of adequately addressing the haemorrhaging of resources by state-owned-enterprises (SOEs), approximately R8 billion has been allocated towards bailouts for SOEs such as South African Airways and South African Express Airways. This same amount could have been utilised to fill the gap left by the R7 billion reduction to the education infrastructure grants.

We tentatively welcome the news that the revenue shortfall has decreased from R48.2 billion to R27.4 billion and will continue to monitor the performance of revenue collection over the next six months. While this is an improvement, the shortfall is still a tremendous amount. There should be no further delay in implementing drastic steps to restore the efficiency of the revenue collector. We will hold Minister Mboweni to his promise to do this.

Government must further be unapologetic about clamping down on irregular government expenditure. Irregular expenditure for the 2018/19 financial year amounted to over R45 billion!

All of these governance challenges rob the public of desperately needed resources that could fund education, health, housing and other critical social spending priorities.

Minister Mboweni repeatedly claimed in the MTBPS and his speech that government remains focused on ensuring the provision of basic services, such as education. We call on him to put his money where his mouth is! There is money to increase allocations to social sectors, but government is not showing the political will necessary to eradicate wasteful expenditure that eats into resources.

We call on President Ramaphosa’s government to address the gaping revenue shortfall, recapacitate the revenue collector to ensure that no further revenue is lost due to maladministration and halt the diversion of much needed state resources into failing SOEs.

Now is the time for this administration to prove that it is for the people by tabling a pro-poor budget instead of more empty promises!

[1] The medium term or the Medium Term Economic Framework (MTEF) is the three-year period that Treasury uses to plan budgets and expenditure. It includes allocations for the current year as well as projections for the two following years.

[4] Figures for the 2018/19 financial year only reflect progress over the first six months of the year.

[5] Briefing to the Portfolio Committee on Basic Education by the Financial and Fiscal Commission on 9 October 2019.

[7] Implementing agents are entities that oversee school construction projects on behalf of government.

[8] Briefing to the Portfolio Committee on Basic Education by the Financial and Fiscal Commission on 9 October 2019.

[10] This became a key component of EE’s Gauteng Sanitation Campaign. In 2016, EE joined others in calling for the provision of menstrual hygiene products in poor schools and the zero-rating of these products after conducting a menstrual hygiene audit of 36 schools in Johannesburg. We formalised this in a declaration adopted by multiple organisations at EE’s Feminine Hygiene Colloquium in July 2017.