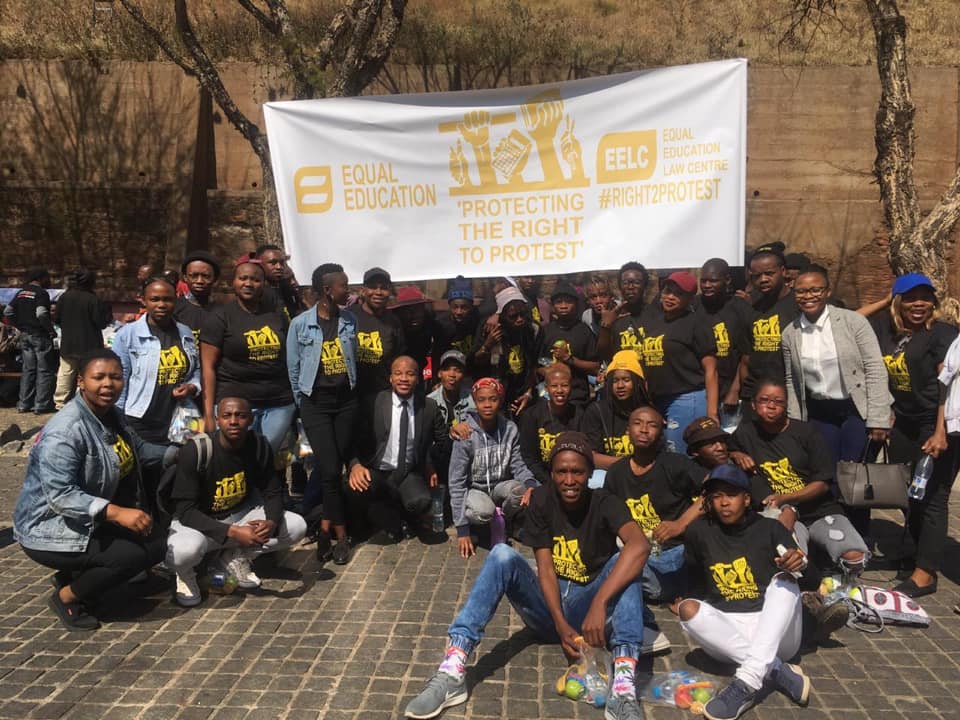 Today, Monday 19 November 2018, the South African Constitutional Court made an historic ruling that declared section 12(1)(a) of the Regulation of Gatherings Act (RGA) unconstitutional. The judgment is the result of a five-year-long struggle that saw 10 Social Justice Coalition (SJC) activists arrested in 2013 while peacefully protesting for sanitation outside the Cape Town Civic Centre.

The SJC, represented by the Legal Resources Centre, and amici curiae in the SJC10 case, Equal Education (EE) and the Right2Know Campaign (R2K), are thrilled at the Constitutional Court’s decision to uphold our right to peaceful protest, a right that is a cornerstone of a free and just democracy.

The unanimous judgment reads, “People who lack political and economic power have only protests as a tool to communicate their legitimate concerns. To take away that tool would undermine the promise in the Constitution’s preamble that South Africa belongs to all who live in it, and not only a powerful elite. It would also frustrate a stanchion of our democracy: public participation. This is all the more pertinent given the increasing rates of protest in constitutional South Africa lately”.

Phumeza Mlungwana, the first accused in the criminal case and former General Secretary of the SJC, said, “The Constitutional Court has again positively shown the working of our democracy. Too often working-class people are left with no option but to protest for the most basic constitutional rights, yet stand a great chance of being criminalised. Today’s judgment is not only about reiterating people’s right to protest, but it’s also about empowering people to organise and fight for their rights”.

Section 12(1)(a) criminalised the failure to give notice for a protest of more than 15 people. This served as a major deterrent to protests, whereby people are less likely to protest due to the possibility of a criminal record – the harshest possible limitation on a right. This is a disproportionate punishment that is in conflict with Section 17 of the Constitution, the right to freedom of assembly. The Constitutional Court declared, “section 12(1)(a) is unconstitutional in its entirety, because, on the case before this Court, the criminalisation of convening gatherings is unconstitutional—regardless of whether the subsequent gathering is violent”.

The Constitutional Court on Monday set aside the SJC 10’s criminal records. The effect of the declaration of constitutional invalidity will apply to all pending criminal trials, and to criminal trials in relation to which review or appeal proceedings have not yet been finalised. This means that anyone being prosecuted (but not yet convicted) cannot be found guilty of violating section 12(1)(a) of the RGA. The Court found that there is no need to amend or replace section 12(1)(a), as it does not leave a legislative vacuum and the remainder of the RGA provides incentives for notice of gatherings. The Court left it up to Parliament to decide on any revisions to the Act, as it is the place of the Legislature to do so.

The Constitutional Court ruling upholds the January 2018 judgment from Judge Ndita of the Western Cape High Court, which declared section 12(1)(a) of the RGA unconstitutional on the grounds that it “deter[s] people from exercising their right to free assembly – a right that is a “vital tool to the country’s democracy”. The High Court concluded that s12(1)(a) is “not reasonable and justifiable in an open and democratic society, based on the values of freedom, dignity and equality”.

The Constitutional Court confirmed this: “The declaration by the High Court that section 12(1)(a) of the Regulation of Gatherings Act 205 of 1993 is constitutionally invalid is confirmed to the extent that it makes the failure to give notice or the giving of inadequate notice by any person who convened a gathering a criminal offence”. The Court emphasised the need to interpret Section 17 of the Constitution, the right to freely assemble, broadly, with the only qualifier being that the assembly must be peaceful and unarmed.

Axolile Notywala, General Secretary of the SJC, said, “This is a victory for democratic participation in South Africa. It’s a victory for the poor, the often forgotten and those that hold real power in this country. Now that power must be realised through activating this right to protest without fear of being criminalised by the State”.

This ruling enshrines the principles of democracy and puts the RGA on par with international protest law, as outlined by amicus curiae the United Nations Special Rapporteur on the Right to Freedom of Peaceful Assembly and Association. The judgment protects the freedom to peacefully assemble in a country where activists have successfully used protest as a tool for freedom, justice, transparency and democracy. As highlighted by amicus curiae EE in their submissions, the judgment notes the chilling effect criminalisation has on all people, but in particular children: “for children, who cannot vote, assembling, demonstrating, and picketing are integral to their involvement in the political process… exposing children to the criminal justice system – even if diverted under the Child Justice Act – is traumatic and must be a measure of last resort”.

As noted by the Constitutional Court, “South Africa’s pre-constitutional era was replete with draconian legislation that, in an attempt to preserve the apartheid political order, punished people for assembling when it did not suit the State”. This judgment is undeniably a step forward for the right to protest in South Africa, but we recognise that across the country, ordinary people will still face many other violations to this basic right, whether from municipalities inventing their own rules to declare legitimate protests ‘illegal’, police and prosecutors using phony criminal charges to keep protest leaders trapped in the criminal justice system for months or even years, and far-reaching interdicts that shield corporations, universities and other powerful institutions from protest. Most recently, in the City of Johannesburg, activists have cried foul over the use of ‘protest fees’ that force poor people to pay a fee before the City will ‘allow’ their protest to go ahead.

In welcoming the Constitutional Court’s judgment, we also reaffirm our commitment to the struggle for equality, freedom and justice; a struggle that we must and will continue.

*Background about the SJC case and court papers can be found here: https://www.sjc.org.za/sjc10