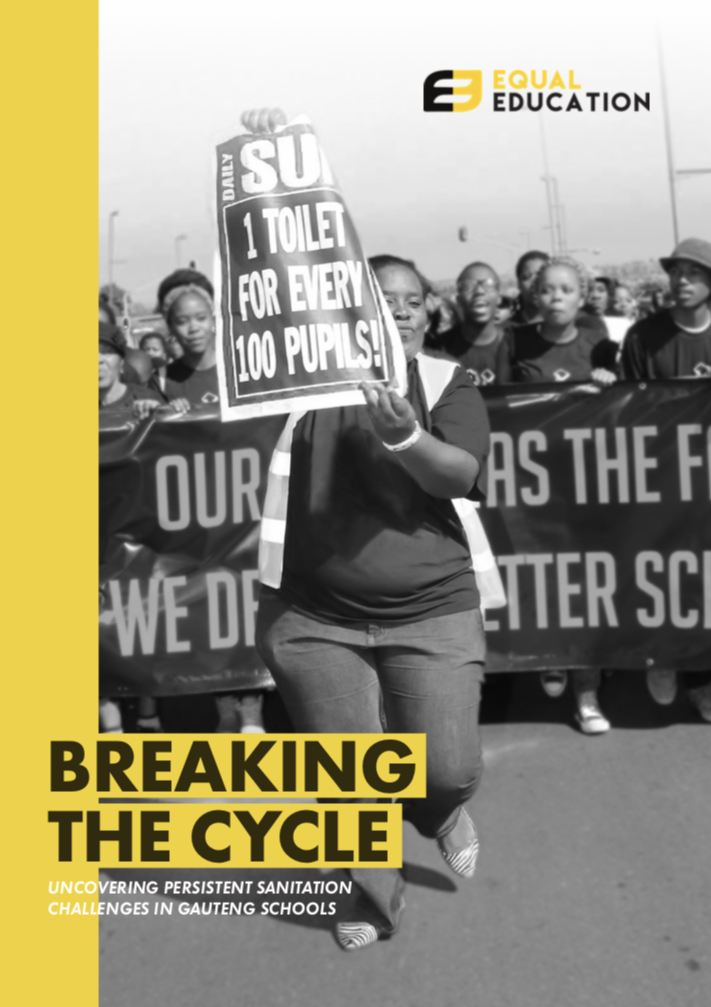 EE Gauteng members began advocating for improved sanitation after a survey of 11 schools in Tembisa in 2013, revealed the deplorable state of the learner toilets. In September 2014, 2000 EE members marched to the offices of the GDE to demand decent sanitation. MEC Lesufi responded by promising to spend R15 million upgrading sanitation at all schools in Tembisa and a further R150 million on sanitation in the province.

The GDE also promised to fix sanitation in the 50 worst-off schools in Gauteng. In addition to these victories, allocations for school infrastructure and maintenance line items, which include expenditure on sanitation, have shifted dramatically in response to EE’s campaign work. Between 2012/2013 and 2016/2017, the Gauteng education infrastructure budget grew by a staggering 95%!

However, serious sanitation issues remain, even in a wealthy urban province such as Gauteng. For the full benefits of these victories to materialise, the GDE must put in place systemic measures to ensure that infrastructure upgrades are of good quality, and are maintained once construction is complete.

In 2017 EE conducted school visits at 38 of the 50 worst schools that received upgrades by the GDE. Our findings revealed that, just three years since the upgrades, schools still faced serious challenges around the number of working toilets available to learners; the lack of privacy in school bathrooms due to broken locks; shoddy workmanship by contractors hired by the GDE; and a lack of maintenance of sanitation facilities.  Some of the key findings of our report are:

Many of the issues highlighted in this report are similar to those that plagued schools EE visited as far back as 2013. These persistent challenges point to the need for interventions beyond merely providing sanitation facilities, that focus on more systemic issues that contribute to the deterioration of infrastructure provided. Without a look at why sanitation facilities continue to deteriorate despite upgrades and renovations, schools and provincial education departments such as the GDE will remain caught in an unending cycle of sanitation upgrades.

Tomorrow when we launch our new sanitation report we will also hand over a memorandum, demanding that the GDE urgently address systemic challenges that contribute toward the deterioration of sanitation infrastructure, and break the broken toilet cycle!