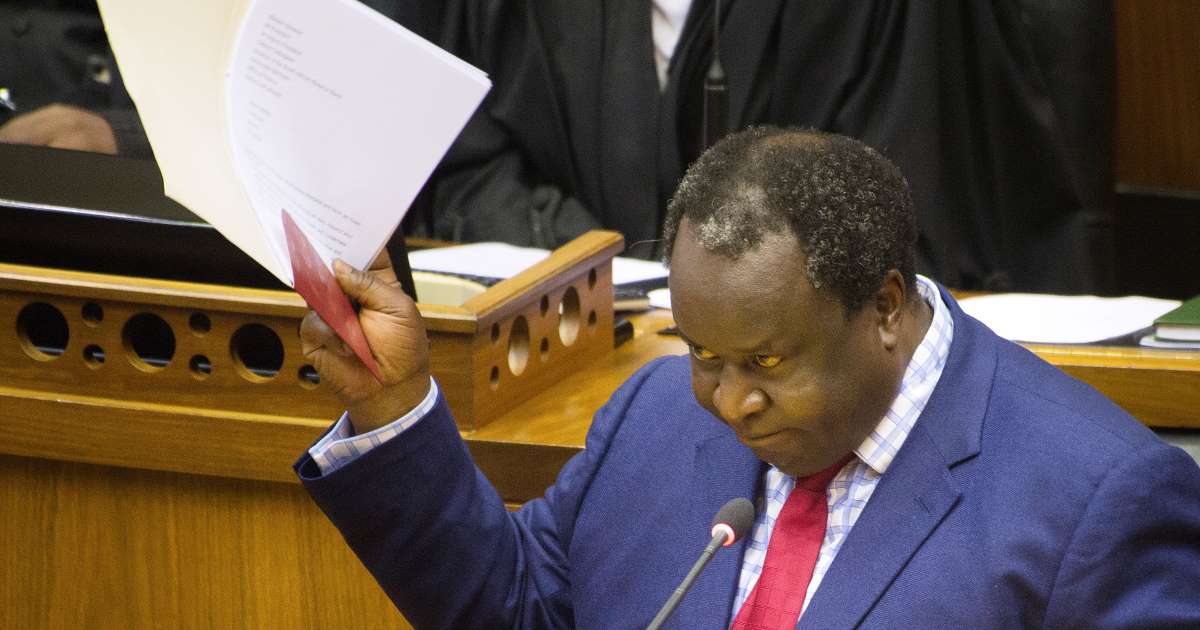 In the lead up to Finance Minister Tito Mboweni’s 2019 Budget Speech, government has made a number of bold claims regarding education, but has failed follow through on these with budget allocations and concrete implementation plans. Equal Education (EE) is particularly disappointed to see that despite strong commitments made to early learning in President Ramaphosa’s State of the Nation address, the budget has failed to prioritise this crucial education phase. There is still no clear plan for eradicating pit latrines, infrastructure delivery is far behind schedule, while allocations continue to decrease, and  Minister Mboweni’s promise to fund sanitary pads through provincial equitable shares, remains impractical.

We acknowledge that Minister Mboweni and Treasury had a tough task balancing a weaker than anticipated economic outlook, a continued revenue shortfall and the lasting effects of state capture and corruption in dysfunctional State-owned Entities (SoEs). South Africa has been in a seeming state of perpetual austerity. Since the tabling of the 2018 MTBPS, GDP growth has been revised downwards from a projected 1.7% to 1.5% for the 2019/20 financial year.

But it is unconscionable that important education and other social priorities must take the backseat, while SoEs bleed the fiscus dry. One of the biggest strains on the budget is the decision to allocate a whopping R69 billion bailout to Eskom over three years.[1] At R23 billion per year, this almost amounts to the Department of Basic Education’s entire annual budget. To fund this, South Africa had to borrow additional money, and increase its expenditure ceiling, or the total amount the country is willing to spend, by R14 billion in the 2019/20 financial year.  It also cut social spending by R50.3 billion! An absolute travesty of justice.

What does this say about our country’s priorities? If we can increase our debt to pay for mismanagement and corruption, instead of using that money to teach a generation of learners how to read, and capacitating working class and poor school communities with the basic resources needed to teach and learn.

Learners betrayed as early learning gets left behind

In his 2019 State of the Nation address, President Ramaphosa communicated a strong commitment to prioritising the early years of learning. He announced the introduction of two years compulsory Early Childhood Development (ECD), a shift of ECD services from the Department of Social Development to the DBE and expanding aspects of the Early Grade Reading Study. But the President’s bold commitments were almost entirely missing from the budget speech.

The ECD conditional grant, introduced in 2017 to increase access to ECD services and improve the condition of ECD centres[2], has remained with the Department of Social Development. There is no clarity on when or how the shift to the DBE will take place. It also remains entirely unclear how two years of compulsory ECD for all learners in the country will be funded when the ECD grant is projected to remain almost stagnant over the next three years, barely keeping up with inflation.

President Ramaphosa further noted that the DBE’s Early Grade Reading Study (EGRS) “demonstrated the impact that a dedicated package of reading resources, expert reading coaches and lesson plans can have on reading outcomes”. He committed to “substantially expanding the availability of these early reading resources across the foundation phase of schooling”.[3]

EE has repeatedly called for the expansion of the EGRS. Prior to the EGRS, which was piloted in North West in 2015, there was little to no evidence of impactful teacher training and coaching interventions in South Africa. Results from the study showed that children in primary schools where teachers were provided with on-site coaching, were likely to be 40% of a year’s worth of learning ahead, when compared to children in schools without the intervention.[4]

We must note our concern over the President’s focus on the expansion of reading resources only, when it is the on-site coaching element of the EGRS that had the biggest impact. But his talk of expansion is also misleading. The 2019 budget makes no mention of the EGRS and the implementation of other reading assessments has been slower than planned.

The 2018 Estimates of National Expenditure (ENE) projected that the early grade reading assessment would reach 8 000 schools by 2019/20. However, this year’s ENE states that the assessment will only be implemented in 4 700 schools! It is projected that the number of schools will be expanded to 20 000 over the coming three years, but it’s hard to fathom how government will ensure this happens if it could not meet the 8 000 target over the past three years.

Almost 80% of Grade 4 learners in South Africa cannot read for meaning. This calls for an urgent and meaningful intervention – not more empty promises and playing politics with the future of learners.

While Equal Education welcomes the commitment to provide reading materials aimed at foundation phase learning, we note with deep disappointment that without additional allocations, the current education budget is stretched too thin to fully implement the recommendations of the EGRS, especially crucial on-site coaching.

The basic education sector makes up 14.4% of the country’s total budget. It continues to grow, but at a achingly slow pace. When inflation is taken into account[5], the total basic education budget – that is, provincial and national budgets – is set to grow by a mere 1.2% in 2019/20. When considering only the national Department of Basic Education’s budget, the picture is even bleaker. The table below shows the DBE’s budget over the last five years. When inflation is taken into account, the budget has been decreasing for the past four years.

Despite repeated commitments to prioritise school infrastructure, budget allocations continue on a downward trend, as a result of increasing pressure on the State’s financial resources. The two grants which address infrastructure challenges, including backlogs, are the Education Infrastructure Grant (EIG) and the School Infrastructure Backlogs Grant (SIBG), which funds the Accelerated Schools Infrastructure Delivery Initiative (ASIDI) programme.

Included in the SIBG budget is an additional R2.8 billion allocated specifically to eradicate pit toilets. EE welcomes this move, however it provides little reprieve following a R7 billion reduction to school infrastructure grants announced in last year’s budget. We are also still looking for a clear plan on how the sanitation crisis will be addressed. Who will be taking responsibility for this task and by when will plain pit toilets be eradicated? What is the role of SAFE as it pertains to this? Will dangerous pit toilets be prioritised? Given that the national ASIDI programme has failed to reach any of it’s initial three year targets in the last eight years, what will be done differently to ensure plain pit toilets are eradicated within a reasonable timeframe?

In his 2018 SONA, President Ramaphosa declared that 187 schools had been completed through ASIDI, a programme meant to eradicate infrastructure backlogs in schools without water, sanitation, electricity and to replace those constructed from inappropriate material.[7]  The President, embarrassingly ignored the fact that all 510 schools initially identified for replacement, ought to have been completed in March 2014![8]Additionally, the President asserted that all outstanding projects under the ASIDI programme would be completed by the end of the next financial year.  Meaning that all projects would  be completed by March 2019.

However, the DBE’s Annual Performance Plan (APP) clearly indicates that there are no plans to meet its targets, which have been revised down to 483, any time soon. To date it has replaced 215 schools made of inappropriate materials[9], a figure projected to be at 297 by 2021.[10] What about the remaining 186 schools? The president has clearly misled the public!

While the 2019 ENE revised these targets upwards, it still leaves a 100 schools unreplaced by 2021.

EE welcomes the DBE’s ambition to increase ASIDI’s annual targets, as outlined in the 2019 ENE, yet we  remain concerned about its ability to actually meet the targets it sets for itself. The table below displays targets compared to actual delivery, over the last three years.[11]

A long walk to school

EE has, since 2014, highlighted how the lack of transport in rural areas poses a serious barrier to education. Thousands of learners have to traverse dangerous terrain and threatening situations to get to school, yet funding for scholar transport remains ad-hoc. We have lobbied parliamentary committee’s to advocate for the creation of a conditional grant, which would ring-fence funding for this purpose scholar. For nearly three years now, National Treasury and the Department of Planning, Monitoring and Evaluation have stated that they would look into developing such a conditional grant.

EE has called for ring-fenced funding, due to provincial education departments, often citing inadequate funds as one of the main reasons for not providing transport to all learners who qualify, for this service. As these government entities continue to drag their feet, it is learners who bear the consequences as state looting crowds out funding to get them safely to school.

Politicians must understand that education and the future of South Africa’s learners is not something to play politics with. Empty platitudes in the run up to elections, are disingenuous and unconscionable, particularly considering the many shortcomings confronting our basic education system. If the government is committed to ensuring that teaching and learning takes places under the best conditions, and that learners are provided with an education that can ensure they reach their full potential, then resources should directed towards the sector. Rather than these stealthy reductions across education programmes, that we have witnessed in the last few years.

Additionally, when the President commits to prioritising foundation phase learning – a critical period in the schooling trajectory of learners – then he must fulfill this commitment. These promises must be accompanied by sound plans and adequate resources to ensure that they are realised. Government will not get away with broken promises on our watch!

[5] A CPI inflation rate of 5.2% was used for calculations in this statement. However, we recognise education economist Nic Spaull’s argument that the use of an education specific index, which takes into account above-inflation increases in teacher salaries, would be more accurate. Such a calculation would lead to a higher inflation rate and an even more grim picture for education funding. Read Nic Spaull’s argument here: https://nicspaull.com/2018/04/

[11] Figures for the 2018/19 financial year only reflect progress over the first six months of the year.
[12] National Treasury, Adjusted Estimates of National Expenditure (2018). Available at: http://www.treasury.gov.za/documents/mtbps/2018/aene/Vote%2014%20Basic%20Education.pdf
Yoni BassMedia Statement: Empty platitudes as budget fails to back up government’s bold education claims02.21.2019