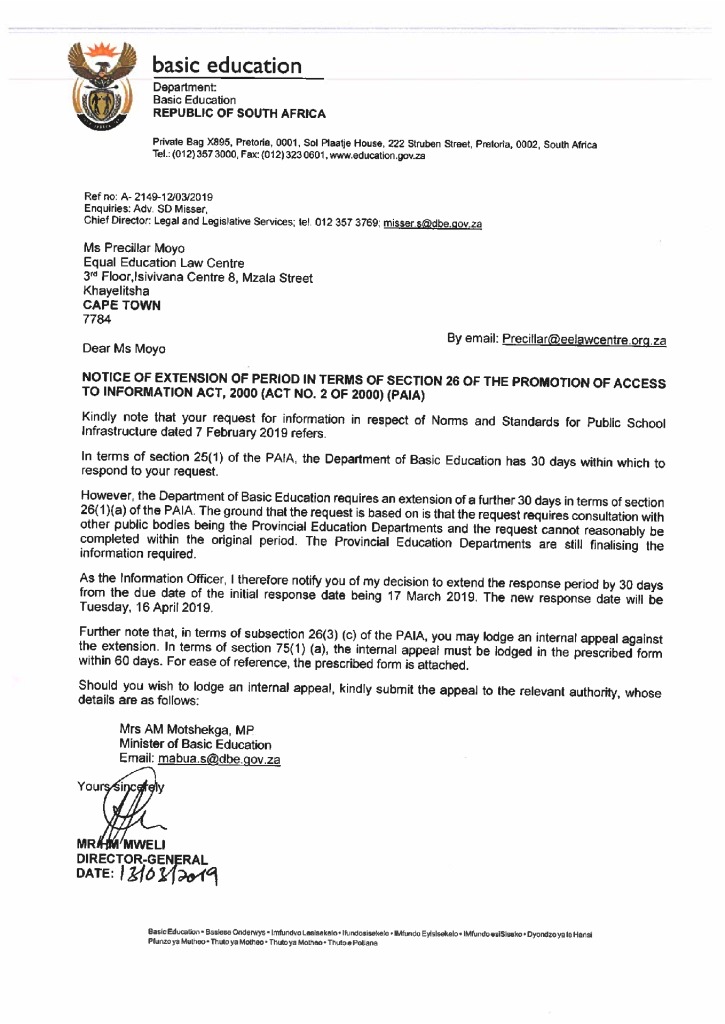 In response to a Promotion of Access to Information (PAIA) request from Equal Education (EE), to get access to the 2018 provincial school infrastructure implementation plans and the provincial school infrastructure progress reports, the Department of Basic Education (DBE) has granted itself a 30-day extension to get the information from provincial education departments – even though the documents ought to have been finalised and made public last year!

This lax attitude – a failure to fulfil the most basic duties – is why schools are not repaired and replaced with the urgency demanded. It is incomprehensible that provincial education departments are unable to timeously and properly report on what they have delivered or how they plan to meet the Norms and Standards deadline.  This blatant disregard to undertake the needed planning amounts to a trampling of learners rights to education, dignity and safety.

Read the DBE’s response to our PAIA request here.

The  #FixTheNorms court judgment ordered Minister of Basic Education Angie Motshekga to make the reports and plans public to ensure that learners, teachers and parents can hold government accountable for infrastructure delivery.

The 2017 reports and plans are the latest available, and reveal that:

The 2017 reports are available here on the DBE website.

In terms of subsections 4(6) and 4(7) of the Regulations relating to Minimum Uniform Norms and Standards for Public School Infrastructure, provincial education MECs are required to submit two kinds of information to Basic Education Minister Motshekga every year:

Note: the WCED progress report must be read alongside the document Strategy for the elimination of public school infrastructure backlogs in the Western Cape.

We will not stop demanding better of provincial and national government, #FixOurSchools now!