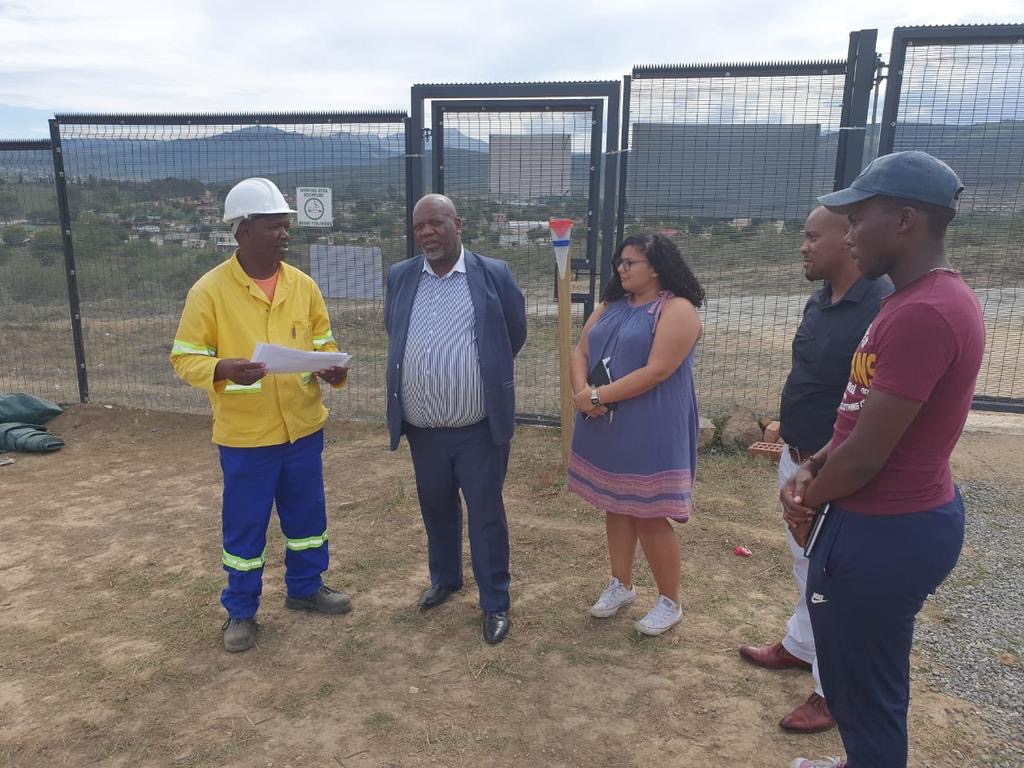 The current Vukile Tshwete Secondary building is, for the most part, nothing but precarious wood structures, and the school’s electricity supply is limited to the admin office. The sanitation facilities are ventilated improved pit (VIP) latrines for teachers, and plain pit latrines for learners – but plain pit latrines are banned by the Norms and Standards for School Infrastructure law.

May 2015: Over 2 000 EE members and EE supporters march to the ECDOE offices to demand the full implementation of the Norms and Standards for schools including Vukile Tshwete Secondary.

April 2016: Thousands of Equalisers and other learners from schools including Vukile Tshwete Secondary, marched to the ECDOE offices to demand safe classrooms.

November 2016: EE members and staff investigated the state of infrastructure at 60 schools in the Eastern Cape, including Vukile Tshwete Secondary. We handed this detailed report to the ECDOE but the then Education MEC refused any substantive engagement with us.

April 2017: Equalisers marched to the ECDOE offices to demand that the schools highlighted in our November report receive urgent attention, and that there be better oversight of school infrastructure implementing agents such as Coega.

October 2017: We picketed outside the Port Elizabeth and East London offices of Coega to demand accountability of it as the school infrastructure implementing agent responsible for rebuilding Vukile Tshwete Secondary. Coega security threatened our peaceful protest with the deployment of private security.

November 2017: We held an evening vigil at Vukile Tshwete Secondary to remind government and the public of what schools are legally entitled to according to the Norms and Standards for School Infrastructure law. We also wrote an op ed to make the public aware of how Coega was failing in its duties.

October 2018: We concluded two years of research into the factors that delay school construction work, and released a report that explains the role of implementing agents – the entities that use public funds to build schools on behalf of government.

December 2018: The ECDOE committed to implementing all the recommendations in our new school infrastructure report on implementing agents. Coega publicly stated that a contractor was appointed to rebuild Vukile Tshwete Secondary, and construction began in January but was halted in February due to a dispute with the contractors.

March 2019: At the quarterly meeting between ourselves and the ECDOE, we inform the department that we will take radical action if the problems delaying construction of Vukile Tshwete Secondary are not resolved by 27 April. Coega did not attend the meeting.

April 2019: We have a meeting with ECDOE HOD, Themba Kojana,  Vukile Tshwete Secondary, alongside the and witness for ourselves that construction has finally  started

It is an indictment on the Eastern Cape government and the national government that it has taken five years for the rebuilding of this school to begin.

We will continue to monitor the building of Vukile Tshwete Secondary, to ensure that Coega and the ECDOE fulfill their duties. Equalisers and other EE members celebrate this progress, and we will continue to take to the streets for decent school infrastructure for the learners of Qobo Qobo and South Africa.