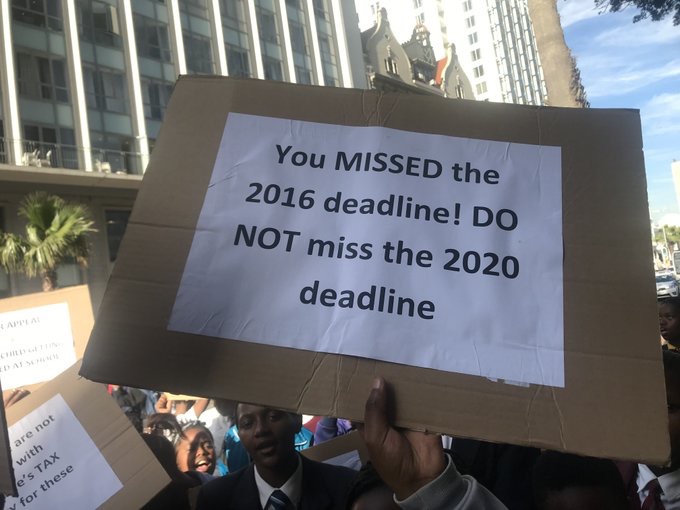 Equal Education media statement: latest annual provincial school infrastructure progress reports are not worth the paper they are written on

The latest annual school infrastructure reports again demonstrate that provincial education departments are unwilling to do the work necessary to provide accurate information on the implementation of the Norms and Standards for School Infrastructure.

Five months after the reports were due to be submitted to Basic Education Minister Angie Motshegka, Equal Education (EE) obtained them via a Promotion of Access to Information (PAIA) request to the Department of Basic Education (DBE).

Every year, the provincial education departments are tardy in submitting their reports, and every year the reports lack crucial information and contain inaccurate data. Our statement on the 2017 reports is available here.

The reports are crucial tools for learners, teachers and parents to hold government accountable for infrastructure delivery, but are also potentially powerful tools for coherent planning and budgeting between various government departments and between the different spheres of government.

The 2020 deadline of the Norms and Standards is looming, and it is clear that most provinces will fail to comply with it.

In terms of subsections 4(6) and 4(7) of the Norms and Standards, provincial education MECs are required to submit two kinds of information in the reports to Minister Motshekga every year:

We found that of the reports from the five provinces in which we work, the majority lacked sufficient detail or provided extremely limited information relating to timelines and costed plans for the implementation of the Norms and Standards. This is a pattern over the years, and has contributed to the unacceptably slow realisation of the Norms and Standards law. Without clear plans and a mapping of the required budget year-on-year, the effective and timeous implementation of this law will be a continuous challenge.

Gauteng’s 2018 provincial report provides no budget information on the replacement of the 29 asbestos schools in the province. Gauteng and the Western Cape have not managed to eradicate their backlogs of schools built from inappropriate material – meaning both provinces have failed to comply with the Norms and Standards deadline of November 2016, and are in breach of the law.

We reiterate our call for the DBE to provide a document template to the Provincial Education Departments (PEDs) to ensure that these annual infrastructure reports contain all the necessary information, and are easily understandable.

The Eastern Cape, KwaZulu-Natal and Gauteng 2018 progress reports reveal a disturbingly similar trait – repetition of the same data contained in the 2017 progress reports! As an example, the Eastern Cape’s 2017 and 2018 reports both calculate the cost of meeting the Norms and Standards deadlines. Both reports provide the exact same number – no attempt was made to update figures based on the latest information or even to take inflation into account. Entire sections of the Eastern Cape report has simply been copied and pasted from the previous report!

The KwaZulu-Natal Department of Education’s (KZNDoE) 2018 report cites that there are a 1377 schools with plain pit latrines across the province, this is the same number that was provided in the 2017 provincial report. It is unclear whether it is the KZNDoE’s intention to disrespect the public by not bothering to make an effort to update these figures, or if there merely has not been any work done to reduce the number of plain pit latrines in the last year.

The Gauteng Department of Education (GDE) provides the same figure for the number of schools with sanitation backlogs and the same budget estimates to address this challenge, in both the 2017 and 2018 progress reports. The number of schools (primary and secondary) in need of intervention in terms of sanitation stood at 747 in 2017 and the figure supposedly remains the same in the latest report.

Conflicting data continues to be an enormous problem. Both the Limpopo and Eastern Cape infrastructure reports contradict the information provided by the 2018 National Education Information Management System (NEIMS). Sanitation figures in some of the provincial infrastructure reports differ significantly from the figures provided by the DBE’s SAFE audit, which was conducted only a few months before these provincial reports were published.

While figures are bound to change throughout the year, severe contradictions in the data make it impossible for the public to gain an accurate picture of school infrastructure in the country. It is also unfathomable how provinces and the DBE will be able to address infrastructure backlogs when they have no clear sense of what these backlogs actually are.

We welcome that provinces such as the Eastern Cape and Limpopo have started to explicitly mention infrastructure maintenance as important to consider as part of infrastructure planning. Unfortunately maintenance is still not adequately addressed in some of the reports and costed maintenance plans are absent from most reports.

Sufficient funding for the implementation of the Norms and Standards remains a problem that most provinces raise in their reports. The achingly slow delivery of infrastructure utilising the available budgets is unacceptable, and significant cuts to the two infrastructure grants in the 2018/19 financial year further compromise delivery. If government is serious about ensuring the urgent and proper implementation of the Norms and Standards for School Infrastructure, it is crucial that it allocates adequate funds towards this purpose.

Leanne Jansen-ThomasStatement: latest annual provincial school infrastructure progress reports are not worth the paper they are written on06.12.2019