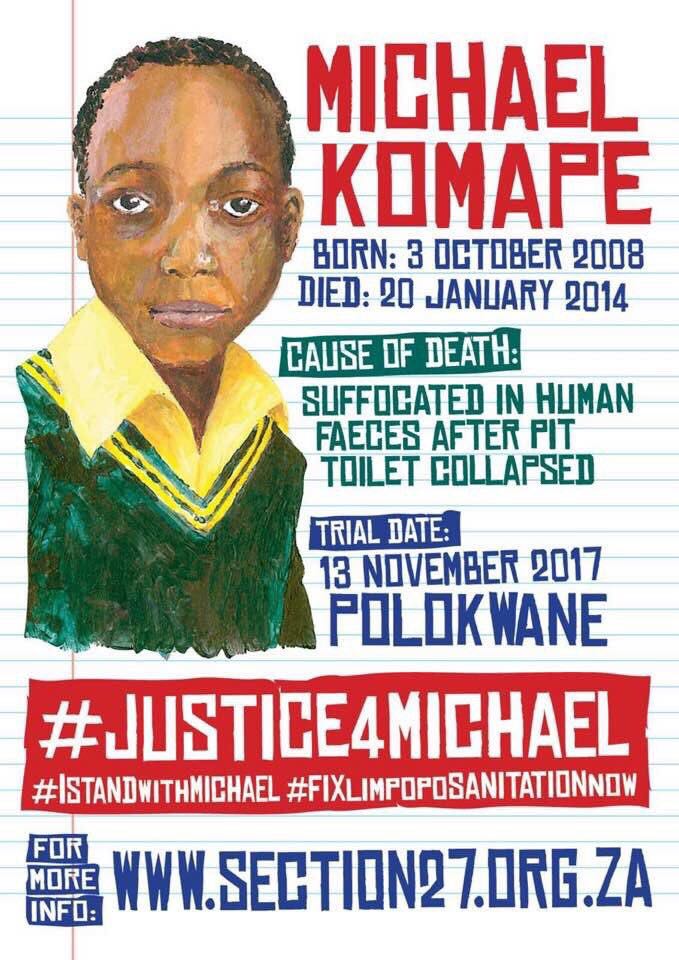 Media statement: Equal Education welcomes the Supreme Court of Appeal’s award of damages to Komape family, as judgment rebukes the State for defending the indefensible

Yesterday the Supreme Court of Appeal (SCA) overturned the Polokwane High Court’s refusal to award the Komape family damages in recognition of their emotional shock and grief. Equal Education (EE), represented by the Equal Education Law Centre (EELC),  intervened as amicus curiae (a friend of the court) in support of the Komape’s claim and welcomes the Court’s recognition of the agony that the family has endured.

The judgment of the SCA, penned by Justice L.E. Leach, recognised that Michael suffered the “most appalling and undignified death” and rebuked the State for conduct which exacerbated the Komape family’s mental agony and grief.

While this was a case that Justice Leach said “cried out for settlement”, the family was obliged to go to court and relive the trauma of Michael’s death in excruciating detail. As the SCA noted:

“The respondents’ attitude to the litigation, up to and including this appeal in which in certain respects they attempted to defend the indefensible, is to be deprecated in the strongest possible terms.”

The SCA noted that it was “startling to say the least” that the Polokwane High Court had dismissed the family’s claim for emotional trauma and shock, which the State had conceded. The Komape family also asked the court to develop the common law to recognise a claim for grief, which EE supported. Rather than developing the common law, the SCA combined the claim for grief and emotional shock, recognising the exacerbated grief experienced by the family as a result of the State’s conduct.

The SCA declined to declare that the constitutional rights of the Komape family had been violated because the SCA stated that “there could be no doubt that the conduct of the administration was constitutionally unlawful”. The SCA echoed the Polokwane High Court’s “stinging rebuke” of the failure of the State to provide proper toilets at schools.

We continue to stand in solidarity with the Komape family.  We hope that this judgment brings some sense of relief to the Komape family, and to all learners and teachers who are forced to teach and learn in unacceptable conditions daily.

We salute Section27 for leading the fight for justice for the Komape family.

EE will continue to make submissions regarding the structural order in the Polokwane High Court requiring the state to fix toilets in all schools in the province.

Read the background to the SCA case and the Polokwane High Court trial here.

Leanne Jansen-ThomasStatement: Equal Education welcomes the Supreme Court of Appeal’s award of damages to Komape family, as judgment rebukes the State for defending the indefensible12.19.2019