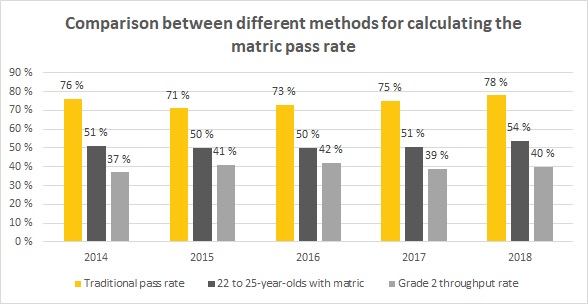 Equal Education (EE) wishes the Class of 2019 the best for their matric results and applauds the hard work and time invested by learners, teachers, parents and school districts, throughout the years to get to this point.

While the release of the matric results remains a critical moment for hundreds of thousands of learners, these results do not provide a good indication of the health of the education system as a whole. We anticipate that Basic Education Minister Angie Motshekga will today announce an improvement in the overall pass rate, with some speculating that it will breach the 80% mark for the first time. “A system on the rise!” the Minister will likely declare again this year.

However, celebrating this pass rate has become almost farcical – every year experts petition Motshekga to place greater emphasis on the percentage of Grade 2 learners who leave school with a matric certificate a decade later.

The difference in pass rates, when dropouts are considered, is striking.

To read our full statement view the PDF here.