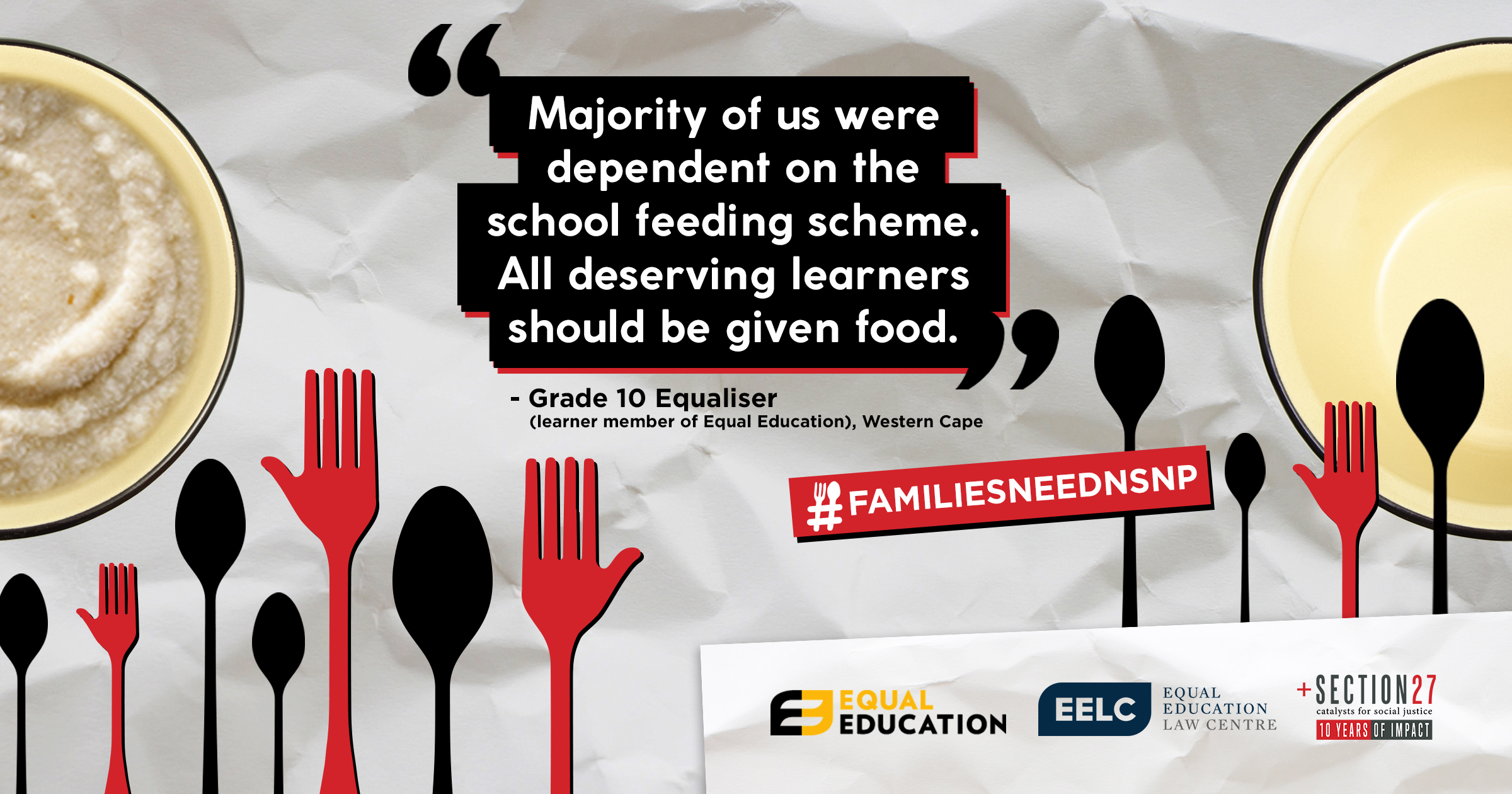 “I am excited by this judgment but also sad that we had to resort to taking the Minister and the MECs to court for what they should have been doing for many learners who benefit and qualify from the feeding scheme. This victory comes at a time where many families struggle to access enough food and have to choose between buying data or food for their children to learn at home.” – Tshepo Mabunda, EE learner member, Limpopo

“I am pleased about the news of the judgment that has come through and I know parents and children are also going to be pleased. Hunger is not a good thing especially when children aren’t eating. It’s good that children will now be able to eat. They are grateful, we are grateful.” – Davhula Azwindini Ivone, school governing body Chairperson at Vhulaudzi Secondary School, one of the applicant schools in the case.

“I feel very confident about the judgment. Children who come from less privileged households [will] at least have something to eat either at school or at home, so the judgment really came through for a lot of learners across the country. [We should do] follow ups to make sure that learners really do receive such [food] parcels as expected” – Xolani Nkabane, EE post-school youth member, Gauteng

Today the work begins of monitoring that the order of the North Gauteng High Court in our school meals case is realised – that the rights of the over nine million learners who depend on the National School Nutrition Programme (NSNP) for a daily meal are indeed fulfilled by government, without delay.

On Friday, Acting Deputy Judge President Sulet Potterill ruled in a declaratory order that Basic Education Minister Angie Motshekga and eight Education MECs were in breach of their Constitutional duties for failing to roll out the NSNP to all eligible learners – whether back at school or at home.

Judge Potterill also handed down a supervisory interdict, requiring the Department of Basic Education (DBE) and provincial education departments to file plans for the resumption of the NSNP to all qualifying learners within 10 days of the judgment, and thereafter to provide the courts with progress reports every 15 days.

Equal Education and the governing bodies of two Limpopo schools were represented by Equal Education Law Centre and SECTION27 in the case against Minister Motshekga and eight Education MECs. We gratefully acknowledge the work of our counsel on the matter: Advocate Geoff Budlender SC, Advocate Tembeka Ngcukaitobi SC and Advocate Thabang Pooe.

Judge Potterill reflected in her judgment that the NSNP is “literally a lifesaving programme for the poorest of the poor child by providing them with at least one nutritious meal a day while being educated. A programme that must be saluted”. In assessing the ability of government to provide food to households through other feeding schemes she also reflected: “There is, and was, no viable substitute for the NSNP for the children”.

Regarding the DBE’s claim before the court that the various education departments were in fact rolling out the NSNP as per our demand, Judge Potterill remarked that it was “surprising and disturbing” that this claim was made under oath when the facts on the ground showed the contrary.

In granting the supervisory order, Judge Potterill noted that the DBE had indeed “played fast and loose with the facts”, and that it was our court case that spurred the education departments into activity. The judgment states: “There is administrative chaos and confusion in the provinces requiring supervision of the Court”.

We are grateful to Professor Jeremy Seekings of the University of Cape Town, and Shaheda Omar of the Teddy Bear Clinic, for their efforts in submitting evidence in support of our case.

The Children’s Institute, represented by the Centre for Child Law, participated in the case as amicus curiae (friend of the court). Their intervention spoke to the interdependency of rights, and discussed the notion of regression in respect of the rights of the child – on this, the judgment reflected that Minister Motshekga and the Education MECs “proffered no justification whatsoever” for the suspension of the programme, and the subsequent retrogression of the rights of learners.

Judge Potterill states in her judgment: “Continued breach [of constitutional and statutory duties] by the Minister and MECs will leave millions of children hungry through the cold winter and as long as lockdown lasts. Hunger is not an issue of charity, but one of justice”.

In the interest of justice, we intend to monitor the implementation of the plans developed by the DBE and provinces. We celebrate this judgment as a victory which reaffirms learners’ constitutional rights to basic nutrition and basic education, and which will go a long way in easing the hunger and strain experienced by families across the country during the period of lockdown.

A timeline of the events that forced us to go to court: