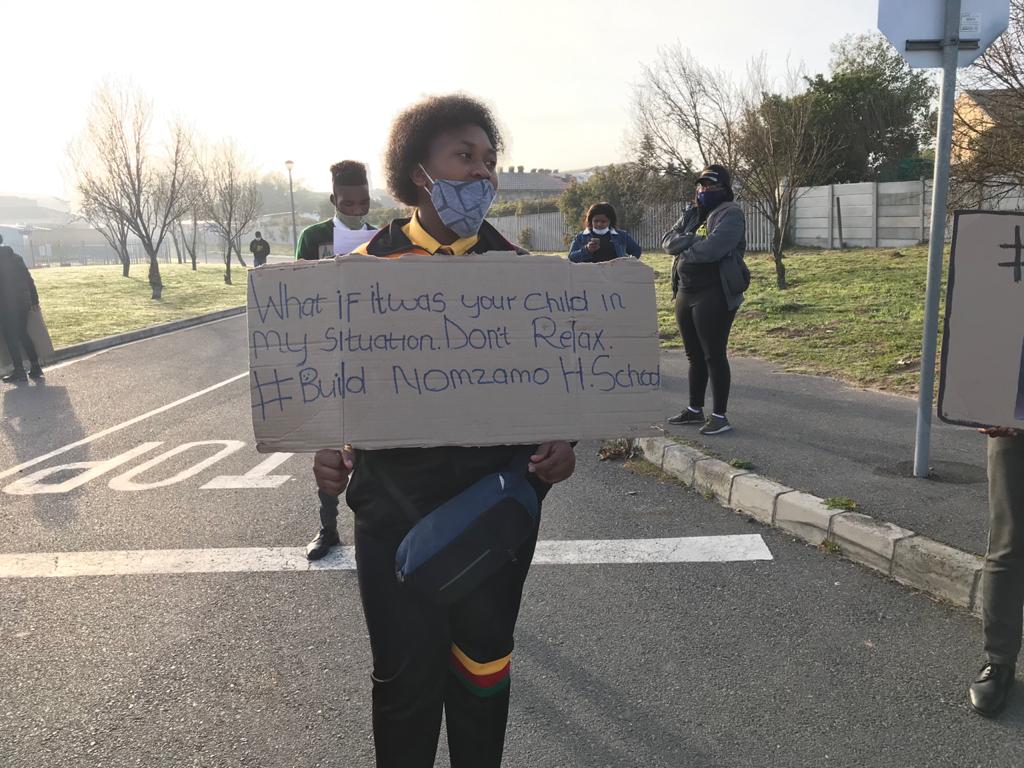 Media statement: MEC Schäfer, we are not failures – we are still being failed!

This morning, Wednesday 22 July, Equal Education (EE) Western Cape members are picketing at the district offices of the Western Cape Education Department (WCED) in Kuilsriver, to demand that the prefabricated, temporary structures at Nomzamo High School in Strand be replaced with properly built classrooms and toilets.

On 12 July, a storm ravaged the Western Cape and caused significant damage to Nomzamo High School, with many of the prefabricated classrooms and toilets overturned and destroyed. It is sheer luck that learners and staff were not at the school when it happened and that serious injuries were avoided.

EE high school members (Equalisers) attending the school, who have been campaigning about the poor condition of their school for years, immediately raised concern about the impact this would have on them. EE members took to social media calling for immediate relief and a long term plan for the school.

When Basic Education Minister Angie Motshekga signed the Minimum Uniform Norms and Standards for Public School Infrastructure into law in 2013, learners in schools across South Africa finally had a legal basis through which they could hold the national Department of Basic Education and the provincial education departments (PEDs) to account for their failure to provide safe and dignified teaching and learning spaces.

The Norms and Standards prescribe certain minimum standards of school infrastructure at all public schools and sets out specific timeframes within which these Norms and Standards must be complied with. According to this law, by 29 November 2016, all schools must have been provided with access to water, electricity and sanitation and all buildings  made of inappropriate materials must have been replaced.

On the fourth anniversary of the date that the Norms and Standards were signed into law, November 2017, EE expressed our severe disappointment that a number of schools across the Western Cape – including Nomzamo High School – were made entirely of prefabricated structures. We are resolute in our assessment that they are not in accordance with the spirit of the law. In our 2014 Social Audit Report on the safety and sanitation crisis in the Western Cape, we highlighted that prefabricated classrooms are not a sustainable, long-term solution to overcrowding.

EE staff and Equalisers from Nomzamo High School demand the provision of infrastructure that advances the right to learn in a safe school environment and which is in the spirit of the Norms and Standards. We reject the provision  of prefabricated  classrooms, when the damage caused by the storm on 12 July proves that these structures are neither safe nor fit for purpose.

We demand that the WCED:

Leanne Jansen-ThomasStatement: MEC Schäfer, we are not failures – we are still being failed!07.22.2020