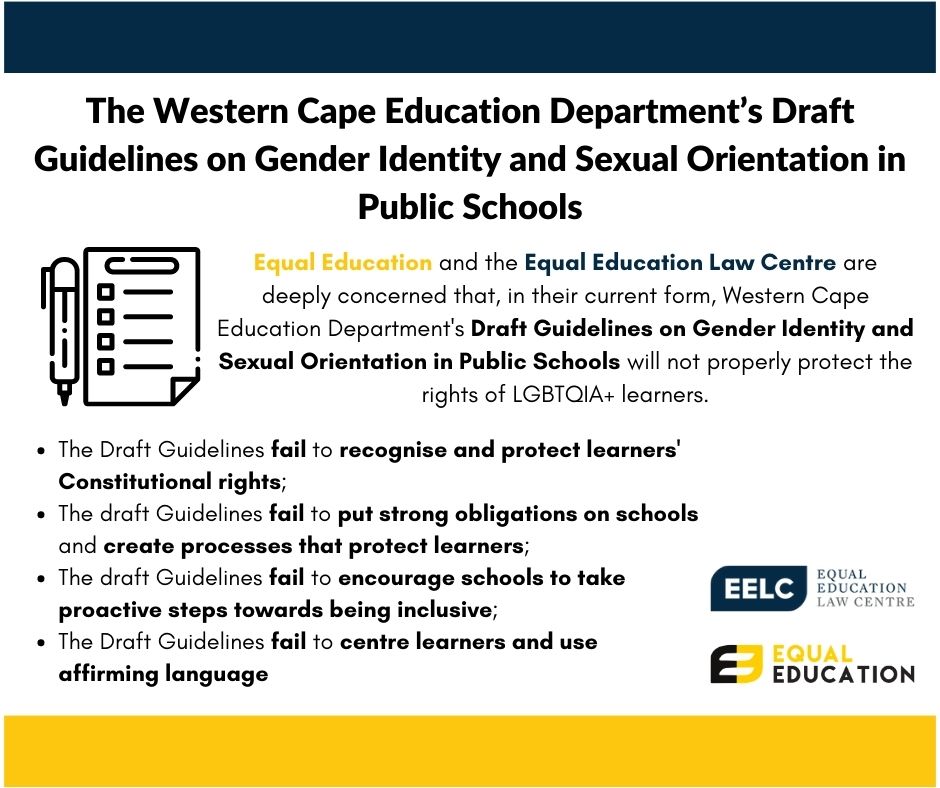 Equal Education (EE) and the Equal Education Law Centre (EELC) are deeply concerned that, in their current form, the Western Cape Department of Education’s (WCED) Draft Guidelines on Gender Identity and Sexual Orientation in Public Schools will not properly protect the rights of LGBTQIA+ learners.

We want to emphasise the importance of a document that can provide schools with direction on being inclusive, but are very worried that, despite the previous detailed feedback that we submitted to the WCED, various drafts of these Guidelines have not fixed the critical flaws. We are submitting a third round of feedback to the WCED today, which points out the problems and how the guidelines can be improved.

Earlier versions of the draft Guidelines, from August 2019 (first published as a policy) and March 2020, were entirely problematic and failed to address questions relating to sexual orientation and gender identity with sensitivity. The original documents were full of highly problematic language. EE and EELC researchers and lawyers held a workshop with Equalisers (EE learner members) to discuss the draft Guidelines and formulate feedback.

The latest version of the draft Guidelines, shared last week with a small number of academics and organisations who previously submitted comments, have addressed some of the problems, but EE and the EELC’s bigger concerns have remained unchanged:

The draft Guidelines do not clearly state learners’ rights – such as the right to equality, dignity, privacy and basic education – and do not recognise that these rights are not negotiable. Instead, clauses in the document that address important issues such as access to bathrooms, dress code, school outings and hostel accommodation, indicate that schools “may” or “are encouraged” or “recommended” to support learners, which seem to depend mostly on the judgement of the school.

These problems may lead to the Guidelines, and the decisions they inform, being challenged in court.

While the original draft of this document was published as a policy, later versions were styled as guidelines – guidelines have less authority and are harder to enforce. Along  with the vague language mentioned above, the draft Guidelines are more like suggestions than firm directions to schools. The draft Guidelines also do not include strong processes to guide schools in decision-making and to ensure learners’ rights are protected. For instance, where a learner applies to be placed in a single gender school or hostel, the draft Guidelines do not stipulate that a learner and/or their parents/guardians must be consulted and there is no process through which to appeal if an application is refused.

While some improvements have been made in this area, the draft Guidelines are still mostly based on the assumption that learners will “disclose” their gender identity or sexual orientation to the school, and that the school will then respond by putting in place certain measures to accommodate the learner. EE and the EELC believe that schools should assume that learners at their school fall within the full spectrum of gender identities and sexual orientations and that inclusion should not be dependent on a learner speaking to the school about their gender or sexuality.

Therefore, schools should be directed to proactively develop inclusive approaches to, for instance, dress codes and bathroom facilities (among other things), which do not require special permission from the school. As an example, schools can develop a uniform policy that allows learners to choose any combination of clothes that form part of the school uniform.

Where special permission is required, this can create the impression that a specific learner is a special case that must be dealt with. Equalisers have also explained that they would not necessarily want to speak about their gender and sexuality with staff at their school.

While the language used in the policy has improved a little, it is disturbing and unacceptable that the draft Guidelines still contain language that is disempowering and vilifies LGBTQIA+ learners. LGBTQIA+ learners are portrayed as a “matter” to be dealt with and language such as “risk assessments” create the impression that these learners are somehow a threat to their peers.

The draft Guidelines also suggest that any learner who speaks to the school about their gender identity or sexual orientation, must be referred to a psychologist, without any consideration of whether the learner wants, or is in need of, counselling.

The draft Guidelines only make room for minimal engagement with or consent from learners. This approach does not consider the evolving capacity (maturing and learning) of children and the need for them to be an essential part of decision-making processes.

These are all dangerous fundamental flaws that seriously undermine the purpose of the draft Guidelines –  which is to create education spaces that are free from discrimination and stigma. We urge the WCED to do better by reconsidering the substance of these draft Guidelines, extending the period of public consultation and meaningfully incorporating the feedback it has received, before publishing a final version.