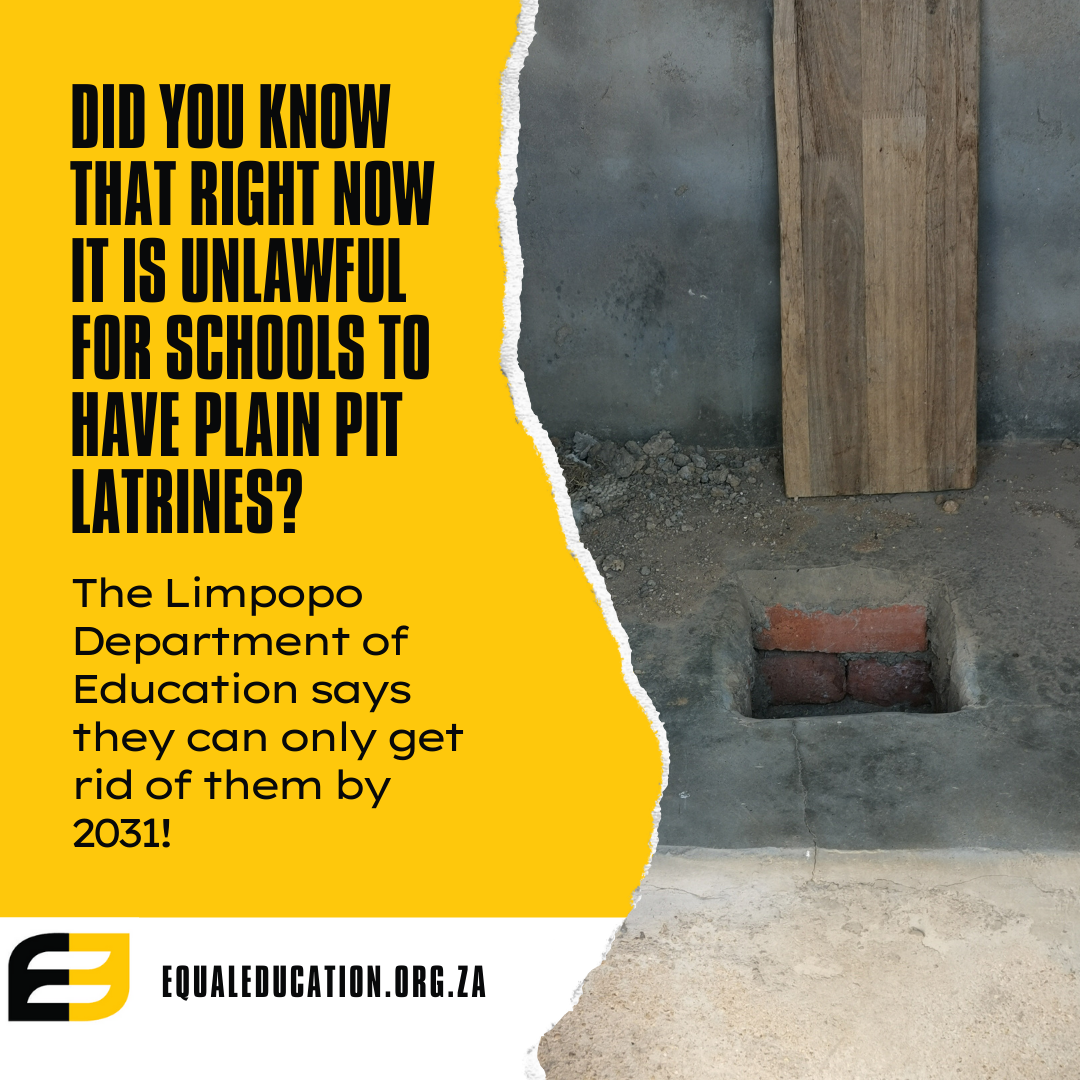 Joint media statement: Equal Education and Equal Education Law Centre demand a better plan to get rid of pit latrines in Limpopo schools, as we return to court in support of the Komape case

“When I was still in high school, we only had two Enviro Loos for boys, and girls [used] plain pit toilets… this meant we spent most of our time waiting for our turn to use the toilets. This made us lose out on teaching and learning time. The plain pit toilets that were used by girls did not have sanitary bins, toilet seats were broken, and did not have doors. The fact that there has been little progress breaks my heart, I finished school in 2013, almost eight years ago and the sanitation at the school I used to go to has not improved enough.”- Mosa Khosa, Equal Education post-school youth member

This Friday 6 August, Equal Education (EE), represented by the Equal Education Law Centre (EELC), will be returning to the High Court of South Africa (Limpopo division) in Polokwane as amicus curiae (a friend of the court) for the Komape case, which is aimed at getting rid of  pit toilets in all Limpopo schools. This is the second part of the court case, which has been led by SECTION27 since 2016.

On 23 April 2018 the court handed down a judgment in the case that ordered the Limpopo Department of Education (LDoE), to provide an implementation plan that would outline when and how the department would remove and replace pit toilets in schools across the province.  The LDoE filed its report on 30 August 2018. Alarmingly, the report stated that the department would only get rid of pit toilets in schools across the province by 2031!

The LDoE’s 2031 deadline is unacceptable, fails to meet the requirements of the structural order of the court, and completely goes against the legally binding deadline provided in the Minimum Uniform Norms and Standards for Public School Infrastructure. There is not enough urgency or determination from the LDoE in fixing school toilets, and not enough care shown for the serious consequences that poor infrastructure has on learners and teachers in Limpopo.

EE and EELC are going back to court to ask that the LDoE write a new plan to fix school toilets that is  reasonable, that meets the requirements of the structural order, and that outlines how the department will address the very urgent school sanitation problems in the province.

Note: Due to COVID-19 restrictions, journalists may apply for permission to report on the proceedings in the courtroom by writing to the judge’s secretary, at LKhangale@judiciary.org.za.

Leanne Jansen-ThomasJoint media statement: Equal Education and Equal Education Law Centre demand a better plan to get rid of pit latrines in Limpopo schools, as we return to court in support of the Komape case08.04.2021