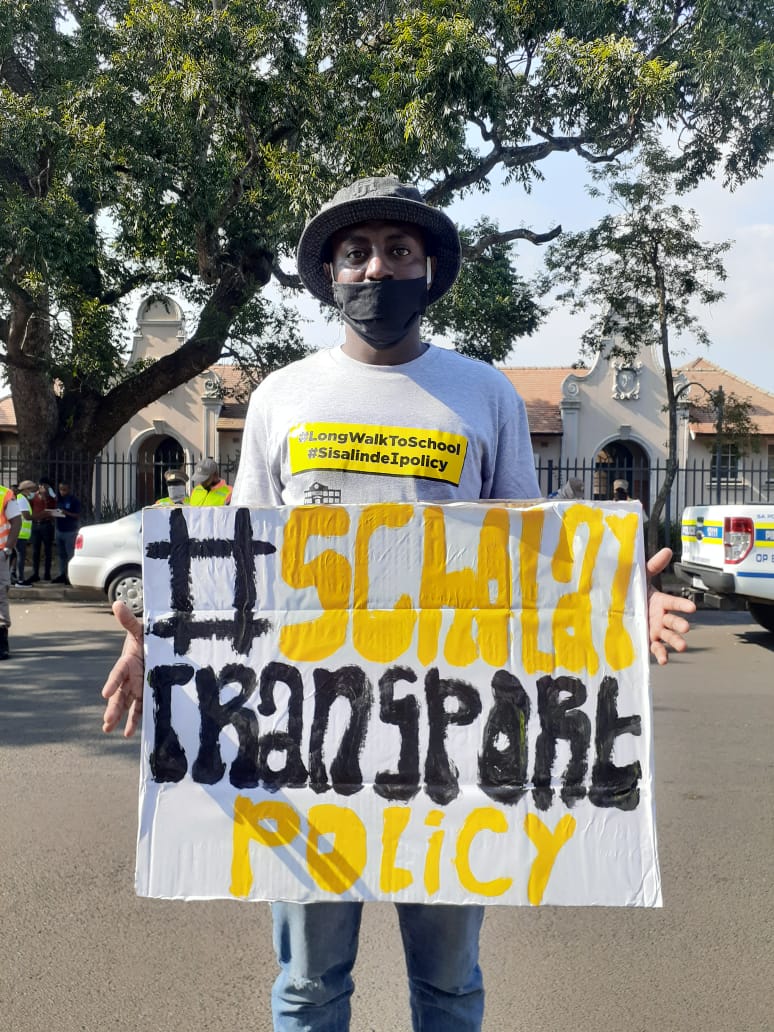 “As someone who has experienced all the disappointments and procrastinations on issuing the policy by the department, I have to say this is incredibly surreal. We have longed for the Learner Transport Policy to be published for years. Now that it is here, congratulations to all the comrades who invested their all to realise this dream of many learners in KZN.”

“I’m very happy about the Learner Transport Policy finally being finalised as it will mean that our work as Equal Education is evident mostly because the schools who have been struggling for years will now have the policy as a back up to fight back.”

After seven years of tireless activism, Equal Education (EE) and the Equal Education Law Centre (EELC) have succeeded in getting the final KwaZulu-Natal (KZN) Learner Transport Policy released to us! We have analysed the policy, and believe that the KZN Department of Education (KZN DoE) and KZN Department of Transport (KZN DoT) have at last applied themselves to the development of a policy that addresses the need for safe, reliable, government-subsidised learner transport across the province. A solid provincial policy is key for better planning, (including data collection and budgeting), and to ensuring proper implementation.

EE’s learner members and post-school youth members, supported by the EELC, are adding the release of the policy to the victories that have already been secured as part of the #LongWalkToSchool campaign. Those victories include:

These victories affirm the power of school communities to force systemic improvements in the South African public education system.

Read the background to our campaign and our fight for the policy here, and our submission on the draft policy here.

While the final policy has a few shortcomings, we are optimistic that it is a way of providing access to government-subsidised scholar transport for tens of thousands of qualifying learners across KZN.

The KZN Learner Transport Policy was finally approved by the KZN cabinet on 9 June 2021 and came into effect on 1 July 2021.

Unfortunately, EE and the EELC were not notified of these developments until August 2021. The KZN DoE has clarified and fixed several important gaps that we raised in our submission on the draft policy, including:

We found that the draft policy only catered for learners with disabilities attending public special schools and did not cater to those who attend public ordinary schools. We saw this as a significant flaw in the policy that did not promote an inclusive education approach. In line with our recommendation, the final policy now caters for learners with disabilities attending public ordinary schools. In particular, a learner having a disability is also one of the criteria for being prioritised for learner transport.

The draft policy did not clearly explain the separate roles of the KZN DoE and KZN DoT, which resulted in contradictions, duplications, overlapping responsibilities, and unclear explanations of processes. For instance, the draft policy indicated that the KZN DoE was responsible for buying suitable vehicles for transporting learners with disabilities, however it also stated that the KZN DoT was responsible for getting vehicles in line with specifications from the KZN DoE for learners with disabilities. We asked that the roles of each implementing department be made clearer.

One of the most significant problems we identified in the draft policy was the lack of timeframes. The draft had no time frames or extremely vague time frames for when obligations must be fulfilled by the KZN DoE and KZN DoT. For example, the draft policy did not state when caregivers should apply for learner transport, nor did it indicate when the departments should provide learners and caregivers with a response.

The final policy makes mention of deadlines and timeframes around certain areas. For example, it outlines that principals should determine whether learners attending their schools require learner transport and identify these learners by the end of the third term of the school year. This should be finalised in the year before the learner will need learner transport. Unfortunately the process that follows the collection of this information is still vague and has no clear timeframes. It is not clear when the final decision about who gets learner transport will be made, when feedback will be given to principals and when transport will be provided to the additional schools that are approved for learner transport.

While the draft policy repeated the criteria used in the National Learner Transport Policy (NLTP) to identify learners that should get  transport, it said that funding constraints could be a barrier in allowing all learners who are eligible for transport to benefit. Under these circumstances the draft policy stated that there would be extra criteria for determining which learners to prioritise, but it was not clear what the additional priority criteria would be. On top of that, the draft policy entirely left out any criteria used to identify learners with disabilities that qualify for transport, or priority criteria for these learners in public ordinary schools.

The final policy, to some extent, took into consideration our recommendation. The criteria for learners with disabilities have been comprehensively detailed, to ensure that learners with disabilities, who attend both public ordinary schools and public special schools, are properly considered and provided with transport. The KZN DoE states that where additional funding becomes available, the directors of the relevant education district will prioritise schools in their districts for extra transport. The criteria for prioritising schools has now been detailed in the final policy. However, this prioritisation process is similar to the criteria used to determine whether learners qualify for transport, and so it is difficult to understand practically how the initial list of qualifying learners provided to the Head of Department of the KZN DoE will be narrowed down.

The draft policy emphasised that a tight budget would have a significant impact on whether learners who qualified could actually get transport. However, EE and EELC highlighted that government could not continue to always use this excuse and fail to provide transport to all learners who qualify. We asked for a detailed long-term plan outlining how all qualifying learners will be provided with transport.

The final policy still identifies budget constraints as a problem but states that the KZN DoE is responsible for motivating for more funds from the Provincial Treasury. Much like the draft policy, the final policy treats these funding shortages as inevitable, and it still does not make an attempt to provide a long-term plan to get the funding necessary to ensure that all qualifying learners are able to access transport  in the long term.

The final policy emphasises the role of principals in implementing learner transport. On 2 August 2021, we asked principals at 13 schools in Nquthu a number of questions related to the policy and their role in its implementation.

The general response from the principals was that they did not know about the policy and so they  did not understand their role in implementing it. This is very worrying because the policy came into effect a month before EE spoke with principals and we have yet to find the final policy on any public platform!

Although certain aspects like the lack of knowledge about the policy by school principals and not having a long-term plan to get more funding are worrying, the release of this policy is a great victory for EE and hundreds of thousands of learners in KZN!

We appeal to the KZN DoE to publish the policy in the Government Gazette and on its website – we have been unable to find a publicly accessible copy so far. We will closely monitor the implementation of this policy in the coming years, and ensure that all learners across the province no longer have to make the #LongWalkToSchool.

“I feel so happy that at last the Learner Transport policy has been released. Also knowing that we had to send the comments via our submission on how we wanted our Learner Transport policy to look like and most importantly we are facing COVID-19 we will no longer be overcrowded. I’m mostly happy that no learner in KZN will get to travel a long distance and our lives are no longer at risk ….it also shows that our work as Equal Education is recognised and evidentiary”– Ntokozo Ntuli, Equaliser and National Council member, KwaZulu-Natal