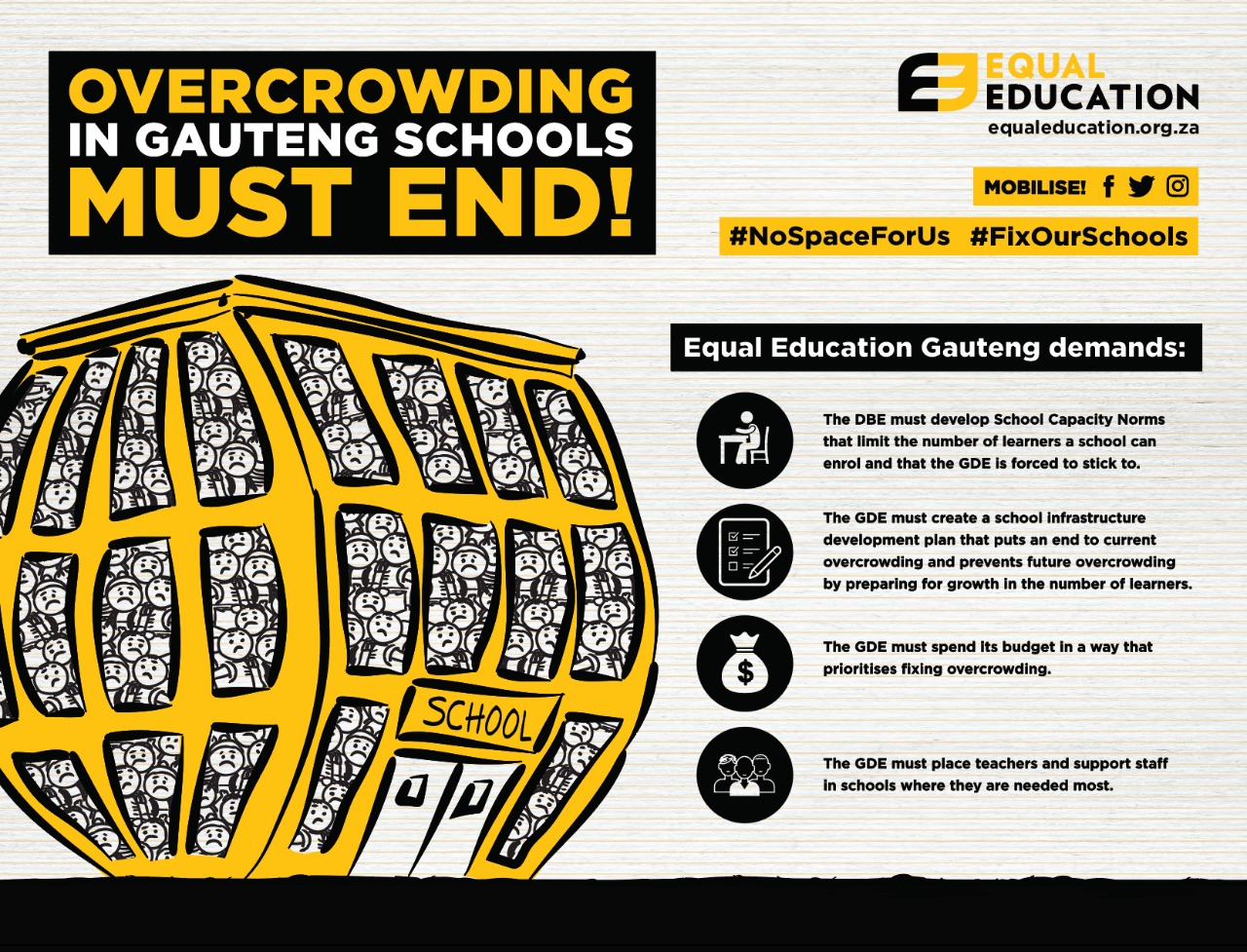 Equal Education media statement: On today’s anniversary of the Norms and Standards for Public School Infrastructure, our research on overcrowding in Gauteng’s schools shows that education departments need to understand and identify overcrowding better

Today, Monday 29 November 2021, is the eighth anniversary of when Basic Education Minister Angie Motshekga adopted the Norms and Standards for Public School Infrastructure. The Norms and Standards demand that all public schools in South Africa should have been provided with enough classrooms (among other infrastructure) by 29 November 2020. Our new #NoSpaceForUs campaign, aimed at putting an end to overcrowding in Gauteng schools, forms part of our national #FixOurSchools infrastructure campaign.

EE’s Gauteng learner members (Equalisers) have for a long time spoken about the negative impact that overcrowding in schools has on their ability to learn and on the ability of teachers to teach. On 1 August, Gauteng MEC for Basic Education Panyaza Lesufi held a briefing in which he gave an update on the state of overcrowding in schools. He said that out of the 2300 schools in Gauteng, only 57 schools have overcrowding challenges. In reference to the reopening of schools, he stated that these schools had been given mobile classrooms and only two or three of the 57 schools still struggled with overcrowding.

Worryingly, MEC Lesufi’s statement is in line with the school conditions that government’s data reflects. Official data shows that of the nine Etwatwa schools in our research sample, none had classes with too many learners, the average teacher-learner ratio was 30:1, only 35% of teachers were overworked and five of the nine schools had a classroom shortage.

But our findings show a very different reality. Between September 2019 and June 2020, we collected data on 751 classes, measured and inspected 105 classrooms, and interviewed 51 school community members in Etwatwa. The huge difference between what is actually happening in schools and what government’s data says is because the measurements used by the Department of Basic Education (DBE)  and the Gauteng Department of Education (GDE) to measure overcrowding in schools do not work.

Our campaign aims to provide insight into what overcrowding is in a South African context, whether Gauteng schools are overcrowded, and what the causes and effects of overcrowding are.

Leanne Jansen-ThomasMedia statement: On today’s anniversary of the Norms and Standards for Public School Infrastructure, our research on overcrowding in Gauteng’s schools shows that education departments need to understand and identify overcrowding better11.29.2021