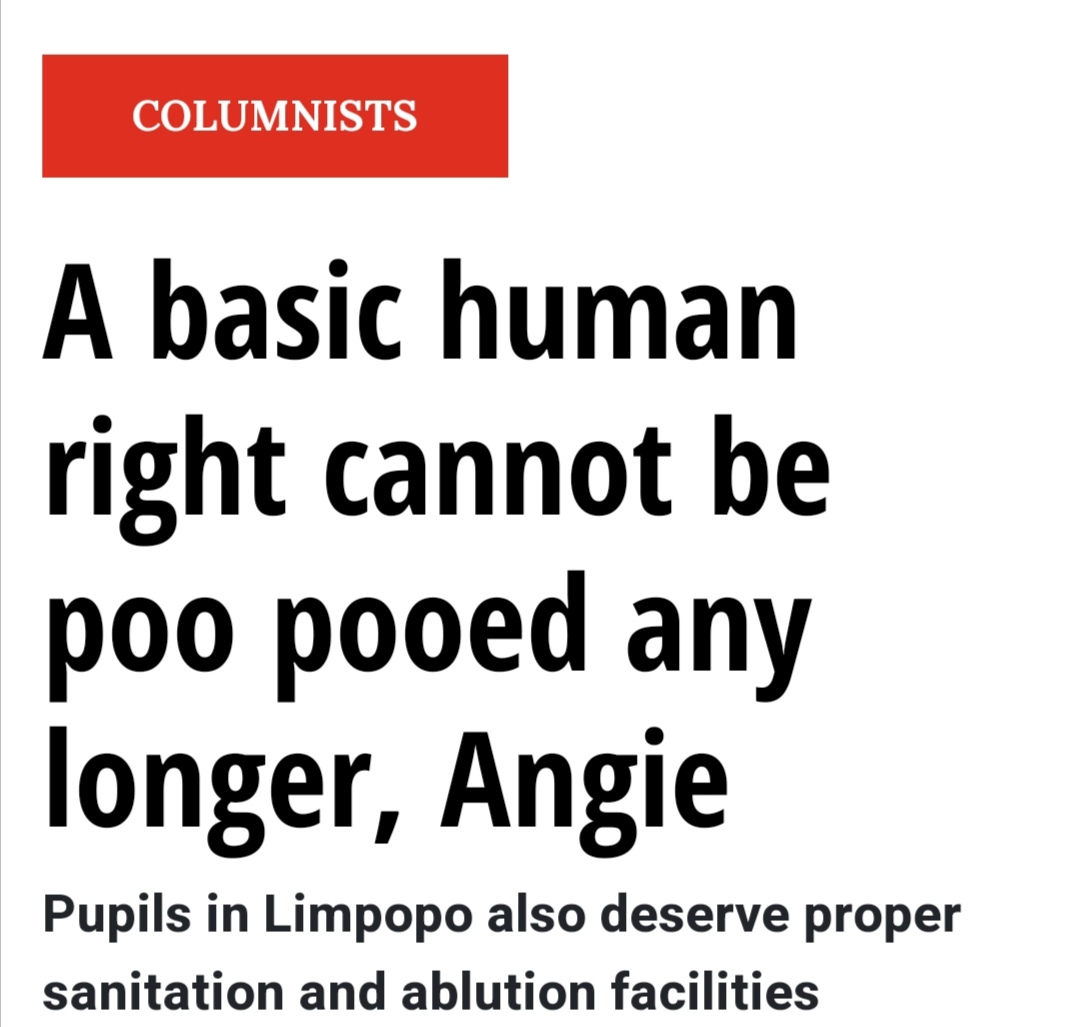 This Friday, with the hearing of the second part of the court case on the state of school toilets in Limpopo (Rosina Komape and others vs Minister of Basic Education and Others), we are reminded of the many learners in Limpopo and other provinces in South Africa that are without access to a reliable water supply or safe, decent toilets in their schools. These learners are subjected to at least seven hours of schooling a day without access to clean drinking water or a usable toilet.

The tragic death of five-year-old Michael Komape who fell into a non-functional plain pit toilet at Mahlodumela Lower Primary School – only four days into the school year in January 2014, made evident the urgent need to fix the toilets in Limpopo schools.  The standard of toilets that government is supposed to provide to public schools, along with all other infrastructure, is clearly defined in the Minimum Uniform Norms and Standards for Public School Infrastructure (Norms and Standards), promulgated by Basic Education Minister Angie Motshekga in November 2013. This law stipulates the basic level of infrastructure that every school must meet in order to function properly –  the conditions that make a school a school. The Norms and Standards state that by 29 November 2016 all schools must have had access to sanitation – and that plain pit latrines and buckets do not constitute access to sanitation.

November 2014, nine months after Michael died, was the deadline for each of the nine provinces to provide Minister Motshekga with an implementation plan of how they would deliver the infrastructure that the Norms and Standards demands, however, by June 2015 the Limpopo Department of Education (LDoE) was the only province that had not made its implementation plan publicly available. It was only in November of 2015, after being run after, that they released a plan, or rather a plan to fail, as was seen by the budget inconsistencies and lack of detailed information. In that very year, the Komapes took government to court, making a claim for emotional shock, trauma and damages for grief,  for the avoidable death of their son, and on behalf of all the Limpopo learners that deserve access to safe and decent  toilets. The Komapes were represented by SECTION27, and Equal Education became involved in the case as amicus curiae (friend of the court).

Eventually, the court handed down a structural order in 2018, ordering the LDoE and the national Department of Basic Education to fix school toilets in the province and to report to it on the plan to eradicate plain pit toilets.  In its report to the court on the implementation of the structural order, after dragging their feet once again, the LDoE complained of a lack of budget and stated that they would only be able to start removing plain pit latrines in 2026.

In 2020, Equal Education revisited 18 schools in Ga-Mashashane, Limpopo, following visits in 2017 and 2018  to assess the progress of schools being provided with the infrastructure as demanded by the  November 2016 deadline of the Norms and Standards. Our visits revealed that in 2020, the toilets at the 18 schools  were still in the same unlawful  state as was found previously.

The DBE and LDoE could have been much closer to fulfilling their legal, political and moral duty – but they have not shown the political will to ensure that our schools are fixed with the urgency needed.  Waiting until 2026 to begin eradicating plain pit latrines is a violation of the rights of learners! SECTION27 and Equal Education are requesting the court to declare the LDoE’s plan inconsistent with the structural order. The DBE and LDoE have not complied with the structural order for a number of reasons, including that the plan to fix school toilets does not comply with the standard of reasonableness set by the Constitutional Court as it relates to socio-economic rights. SECTION27 and Equal Education are requesting that the court declares that the DBE and LDE’s plan is unreasonable and unlawful.

It is painful that 27 years into our democracy we still have to fight for the most basic of human rights. Previously disadvantaged communities remain disadvantaged as a result of the lack of commitment from our elected leaders to serve the public. A sense of urgency in attending to serious matters like this and a respect for the law is the least they owe us. We hope that the court passes judgment in favour of SECTION27 and the learners of Limpopo.