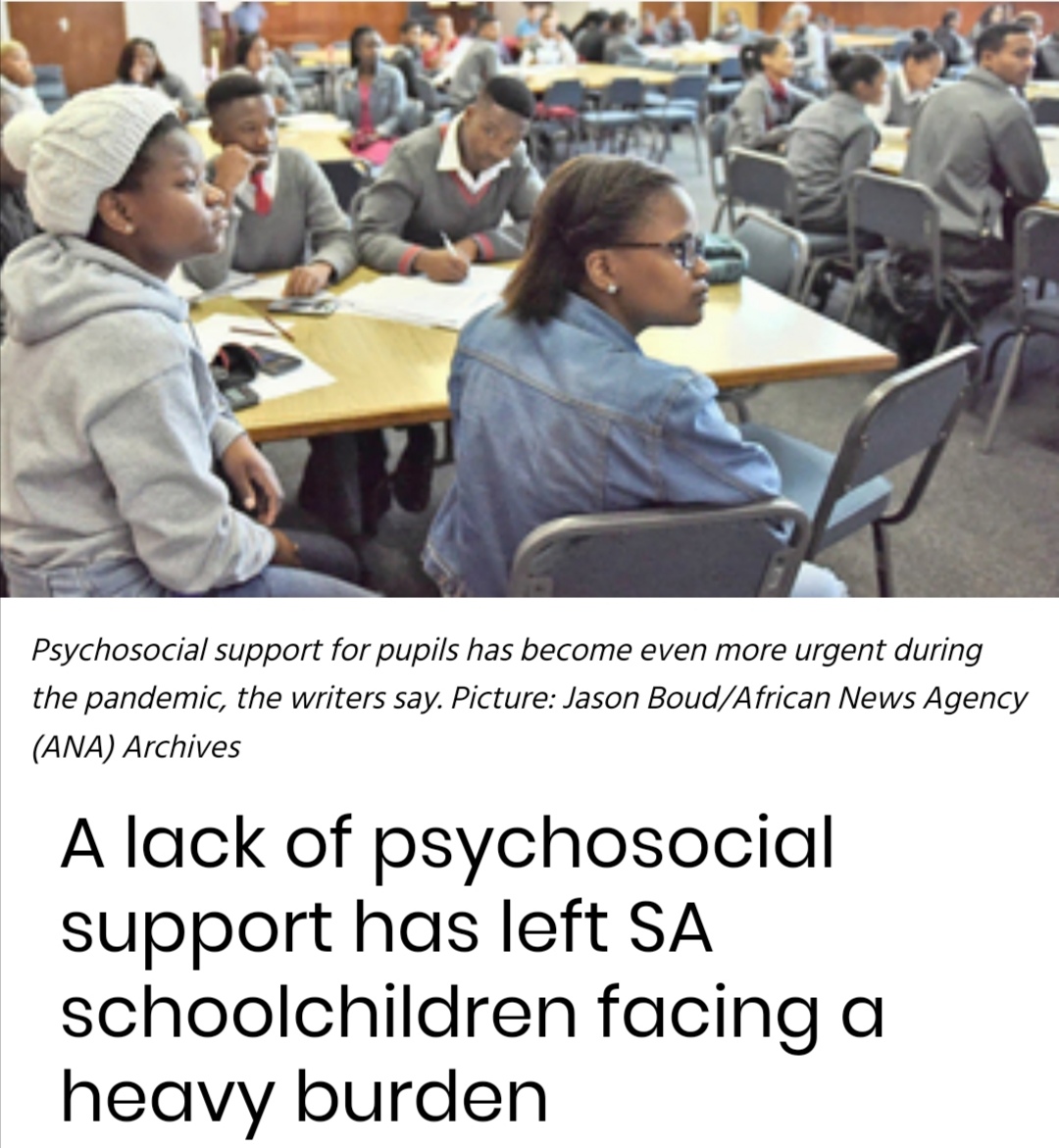 ‘We are given more work with less and less support. The lockdown has affected me mentally, emotionally and it has left me depressed. At the same time, there’s loads of work at school that I must do in this short period of time.”

This is how Grade 12 pupil Yonda Magubudela explains the impact of the Covid-19 pandemic on her schooling.

The Equal Education member, from Khayelitsha, has been wondering who she can share these feelings with.

“Someone who is well trained for such circumstances but I couldn’t find one at my school and, even before lockdown, there was never access to psychosocial support at my school.”

For many pupils like Yonda, and teachers in black public schools, anxiety about Covid-19 has added to the existing anxieties brought on by unsafe learning environments – with limited teachers, classrooms, textbooks, safety infrastructure and other vital resources.

In order to support pupils and teachers in Western Cape schools, the Western Cape Department of Education (WCED) must strengthen psychosocial support structures, work more deliberately with the departments of Health and Social Development, communicate with pupils on how to access reliable support and ensure remote support (through telephone or online) is available for pupils who are still at home due to medical reasons.

Over the past four years, Equal Education (EE) has consistently demanded that psychosocial support be a priority for the WCED – a demand that became even more urgent during the pandemic .

The Department of Basic Education (DBE) has repeatedly acknowledged the need to provide adequate support to pupils, teachers and non-teaching staff in media briefings, plans and guidelines and, in May, the WCED published a guideline on psychosocial support to highlight the province’s interventions for pupils and WCED employees.

The disappointing reality is that these interventions still do not appear to have resulted in substantial shifts on the ground. Equalisers (EE high school members) in the Western Cape have repeatedly raised concerns that the system for psychosocial support has long been under strain. “We did not learn under lockdown but we are given new work. No one listens when you say you are not coping. No one is helping us cope. Every day we are given more work and less support,” says Equaliser and Grade 12 pupil Anathi Tyelentombi, 20.

Usually, pupils at public schools who require professional psychosocial support are referred to psychologists or social workers based at the WCED district offices or to external non-governmental organisations through a process outlined in the DBE’s Screening, Identification and Support Policy (Sias). This process is facilitated by the pupil’s teacher, the school-based support team (usually made up of a member of the school’s senior management, a teacher from each grade or phase, and a learning support teacher if the school has one) and the relevant district-based support team. The district-based support team is made up of officials whose responsibility it is to support schools, parents and communities, to organise appropriate support for all pupils, as per the Sias policy.

The capacity and functionality of the school-based support team (SBST) and the capacity of the district are key determinants of whether pupils will be able to successfully access professional psychosocial support. However, teachers at WCED schools in working class township communities have explained to EE that their role within the SBST is already compromised because large class sizes and fewer resources make it difficult to accommodate their SBST role in timetabling, and that little to no training is provided for this role. One would imagine that these challenges will worsen in the coming months, as curriculum delivery is under pressure and as different schools adopt different timetabling methods.

Moreover, teachers noted that district-based support services are, at times, overwhelmed. They relayed that, in many cases, it is only possible to refer crisis cases – with very little capacity in the system to proactively support pupils with counselling or support.

Equalisers have reflected on how the existing lack of resources – exacerbated by the complexities of remote learning – coupled with little to no guidance on how to access psychosocial support services, have resulted in them making the difficult decision to leave school.

“The reason why I dropped out is because I was not coping. There was a lot of work and even teachers are not teaching, they are just giving work and deadlines. We were not given textbooks or even access to labs, the tool was phones and we go to school at 7am and leave at 5pm.

“I get home tired and unable to study. No one has asked me why I dropped out. They don’t care, they just carry on with those present. It is not easy to live in the township – there’s nothing to do the whole day. You end up being depressed,” Tyelentombi says.

A recent EE survey, which looked at psychosocial support at schools after lockdown, revealed alarming results in the Western Cape: two thirds of the pupils surveyed (67%) indicated that there was no one at school who they could speak to if they felt scared or sad about something happening at home, at school or in their lives, and 72% said that when they returned to school, no one explained to them how they could access support if they were feeling sad or scared.

Pupils and teachers are pushed to salvage the academic year, without accessible and reliable psychosocial support. The DBE must guide provinces effectively and build existing partnerships with the Department of Social Development and the Department of Health, to ramp up systems of support.

The WCED must capacitate and support school-based structures and communicate support strategies to pupils. If existing measures are no longer effective, it is possible that there needs to be a careful re-look at the current system. The absence of, or inadequate access to, psychosocial support will undoubtedly have lasting effects on pupils’ right to education.