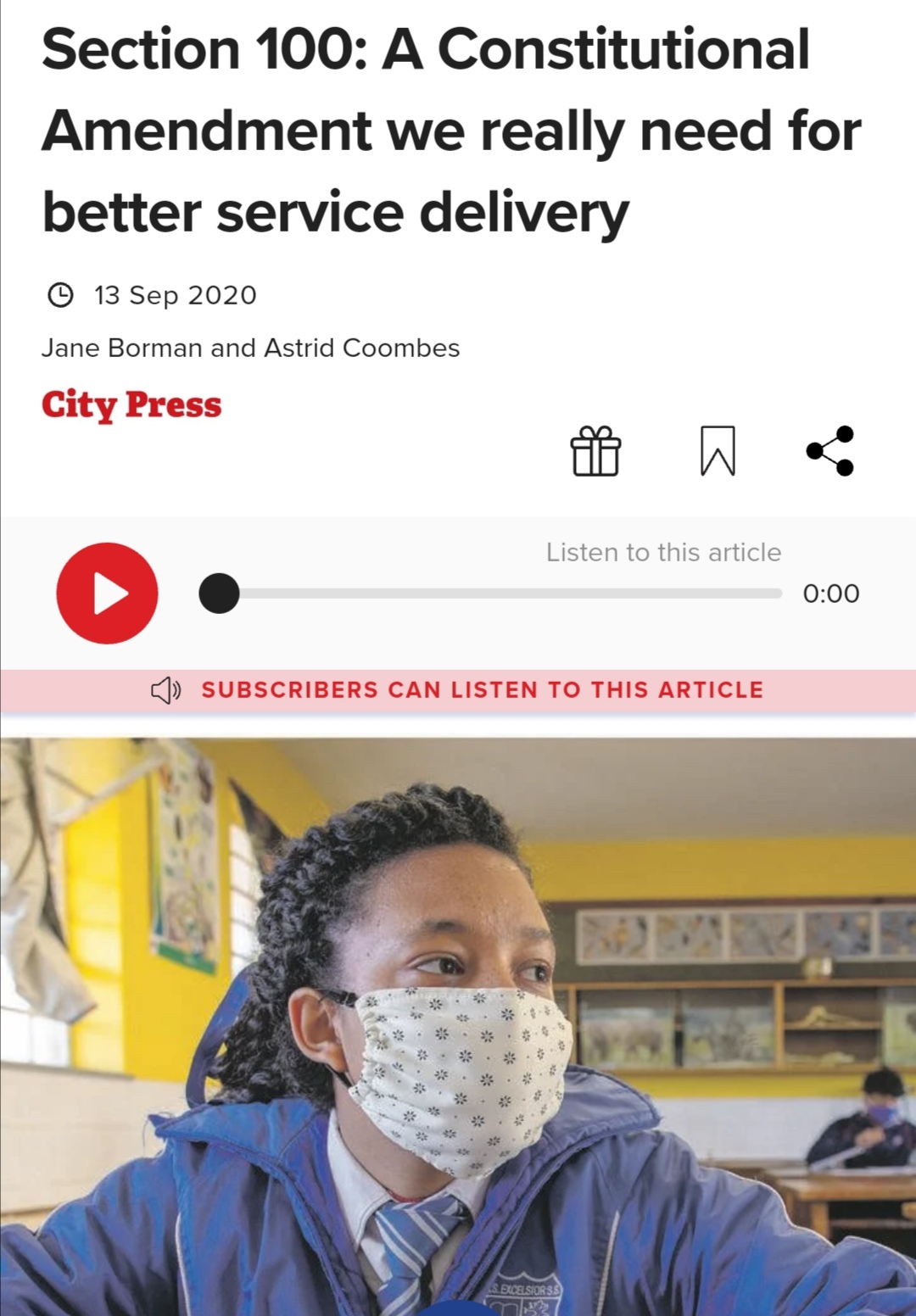 For the past four years, Equal Education (EE) and the Equal Education Law Centre (EELC) have been advocating that Parliament change section 100 of the Constitution to better protect pupils’ education rights.

Section 100 allows national government to intervene in a provincial department – as an extreme temporary measure – to ensure service delivery.

In 2016, EE and the EELC made a joint submission to Parliament’s Constitutional Review Committee, which is tasked with reviewing the Constitution.

Our submission aimed to address a concerning trend – national interventions in provincial departments that fail to correct poor service delivery.

Last week, the review committee finally met to discuss previous submissions made in respect of proposed changes to the Constitution, including our section 100 submission, which we are informed will be reviewed as a matter of priority.

This comes at a time when the Covid-19 pandemic has highlighted the life-threatening nature of poor service delivery and the increased need to have a national intervention structure that works.

The problems experienced with national interventions were first brought to EE and the EELC’s attention in the Eastern Cape nine years ago.

Section 100 allows national government to intervene in the functioning of provincial departments when a province has failed to fulfil, or cannot fulfil, its functions. Interventions can be based on, among other things, concerns over service delivery or the financial management of provinces.

The intention behind this is to ensure that national government rebuilds the capacity of the provinces in an organised, accountable and transparent manner.

However, this was not how the intervention in the Eastern Cape progressed on the ground.

Following the decision to stage an intervention in 2011, the provincial cabinet decided that, until the scope and powers of national government were clarified, the provincial department would retain administrative authority.

Provincial resistance to the intervention delayed its implementation for almost a year. In early 2012, reports surfaced of the “tug of war” between national government and the provincial head of department.

For the duration of the intervention, there was uncertainty regarding its status. In 2016, there were reports by provincial and national officials that the intervention had been downgraded or withdrawn.

The Eastern Cape is not the only province where confusion has shrouded a section 100 national intervention.

In 2018, national government intervened in 10 of the provincial departments in North West, including education, seeking to address widespread allegations of corruption and maladministration.

Much like in the Eastern Cape, the section 100 intervention in North West has been marred by several challenges. These include a lack of transparency by the national task team managing the intervention, confusion regarding who is in charge of the day to day running of provincial departments and little publicly accessible information on the intervention’s progress.

There are some simple remedies to the wording of section 100 of the Constitution that could go a long way towards addressing these unacceptable challenges.

EE and the EELC have proposed that section 100 be changed to require the passing of legislation that regulates such interventions. This legislation must provide more clarity on how roles and responsibilities are divided between national and provincial governments during a section 100 intervention.

The proposed legislation must also define the process of withdrawing an intervention to avoid what has happened in the Eastern Cape.

In the interest of accountability, EE and the EELC have also proposed that section 100 be changed to require the National Council of Provinces (NCOP) to regularly review the progress of an intervention and make recommendations when appropriate.

National government must be required to report regularly to the NCOP on an intervention’s progress and any challenges experienced. In this way, Parliament and the public will be kept informed of the progress of the intervention and will be able to hold government accountable. Regular reporting will also avoid uncertainty regarding the status of an intervention.

These proposed amendments are still under consideration by the review committee. Despite the lengthy process of review, some positive steps have been taken. In March last year, the committee discussed EE and the EELC’s submission, and stated that the committee was “in favour of a slight amendment to section 100 so as to give it clarity and effect”.

In the meantime, EE and the EELC are continuing to advocate the adoption of this amendment as we believe that it will give section 100 interventions a greater chance of success.

In the education sector, these interventions can help protect the rights of pupils where they are being failed by provincial education departments.

South Africans have a right to effective, transparent and accountable governance. The proposed section 100 amendment will be a small but significant step in that direction.