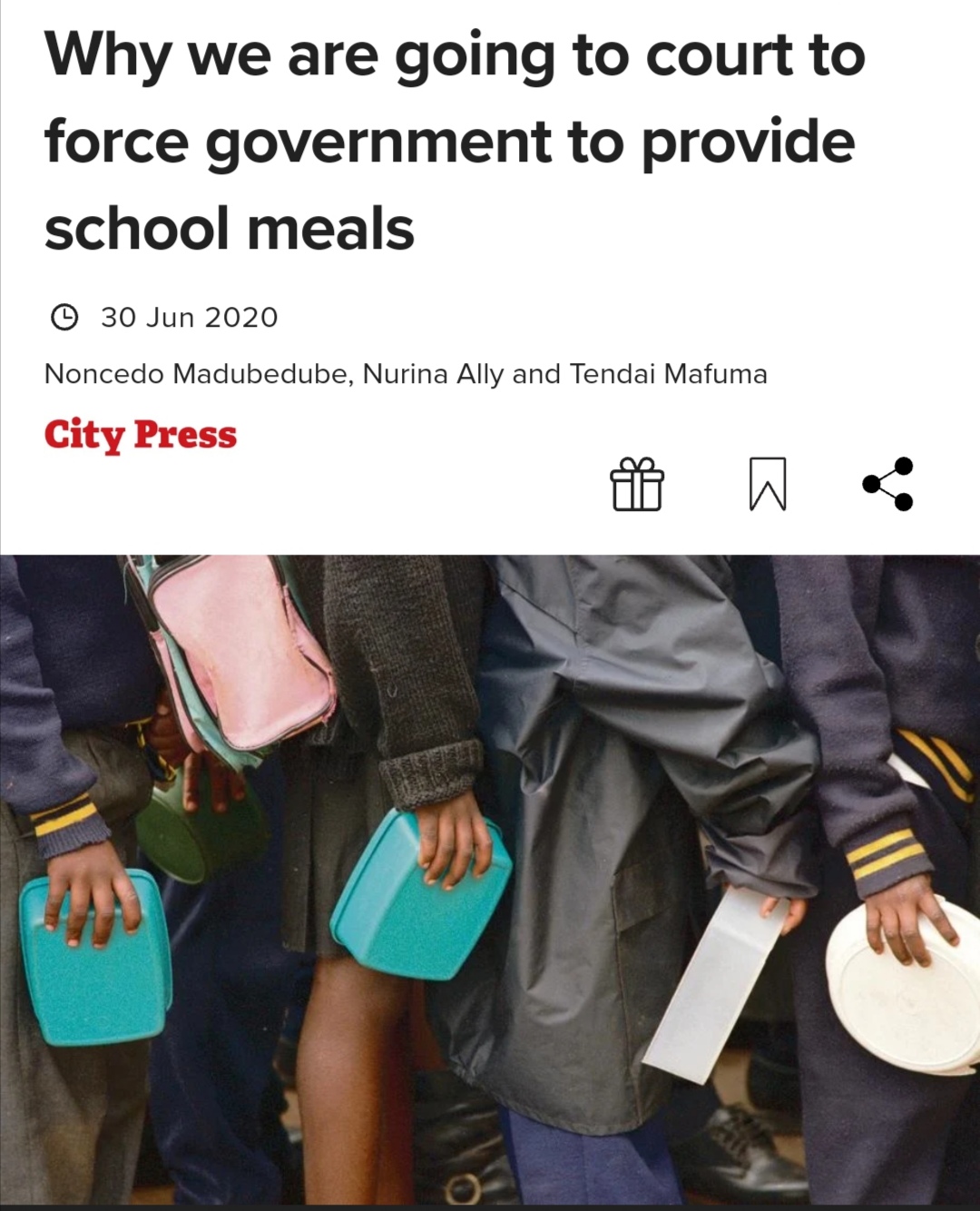 Equal Education and two Limpopo Schools have taken the government to court in order to ensure that children can benefit from school feeding schemes.

It is tragic that we have had to do so.

While the basic education department claims that it has had intentions to roll-out the national school nutrition programme to all pupils, a trail of broken promises inspires little confidence that children’s rights will be vindicated in the absence of ongoing oversight.

The impact of the national lockdown on school nutrition programmes

When schools closed in March 2020 due to the outbreak of Covid-19, there was immediate concern about what the impact on learning and education outcomes.

The importance of school nutrition programmes both as a social safety net for children living in poverty and food insecurity, and as part of national educational policies cannot be overstated.

With schools being closed, none of the nine million learners who rely on the national school nutrition programme have access to the daily meal it provides.

School nutrition programmes, when properly implemented, can help to get children into school, and to keep them there thereby enhancing enrolment and reducing absenteeism and dropout rates.

Once children are in school, the nutrition programme contributes to enhancing their ability to concentrate and learn. With children fed at school, families are better positioned to navigate other financial hurdles.

The social value of school nutrition programmes and its role in mitigating the indignity of hunger pangs for children came into sharp focus when they were no longer available under the lockdown.

Families have reported not having sufficient meals for a significant part of the lockdown.

Schools have cobbled together already-meagre community resources to support pupils in need.

Parents and caregivers have resorted to borrowing from loan sharks, cutting their budgets for basic toiletries and other essentials and have gone without food at all in some instances.

Pupils have described the tension that food insecurity has brought to their families, the struggle they have to concentrate and learn on an empty stomach and needing to have to make a choice between buying food or buying data in order to access school work.

Broken promises and the need to go to court

Recognising the severe impact of a prolonged discontinuation of the national school nutrition programme we have, since April, repeatedly sought to engage with the department about the pressing need to ensure that pupils have continued access to critical nutrition provisioning.

We provided it with research that set out various examples of how other countries had ensured continued delivery of school meals. Critically, we asked what plans were in place for the provisioning of the school nutrition programme once schools open, both for pupils returning to school and those who remain at home.

This was in the spirit of a common goal to protect and further the best interests of children.

The responses did not meaningfully address the issues raised or recommendations made.

Instead, the department ultimately adopted the attitude that it had been inundated by a “barrage” of letters.

They did so at a meeting of the Council of Education Ministers, a decision which the basic education department has itself described as “constitutionally binding”.

Yet, despite this decision, Motshekga retracted this commitment and announced on June 1 that the nutrition programme would actually not be rolled out to all learners whose classes had not yet resumed.

And that is exactly what then happened – when schools reopened Grades 7 and 12 received meals but millions of children were still left hungry.

Alarmed by the about-turn of the department, Equal Education and the two schools tried to obtain clarity but were ultimately left no option but to go to court.

And litigation has certainly not been the first or preferred route to resolving this issue.

The department was only spurred into action after litigation was initiated

In its response to our court case, the basic education department portrays EE and the schools’ approach to court as unnecessary.

It suggests that consistent preparations for the full implementation of the national school nutrition programme has been under way and no commitments have been broken.

But this is simply not the case.

The facts show an about-turn as a result of litigation and a hurried attempt to get provinces to set a roll-out “target” date of June 22 (the date that the respondents’ answering affidavit was due to be filed in court).

That it was only the pressure of litigation that spurred the basic education department into action is not speculative.

Mweli made this plain in a letter to provinces dated June 19 where he refers to the application launched by Equal Education and the schools and states that provinces would be required to start feeding all pupils with effect from June 22 and that “[a]ny later date will force the department to report to the court on a fortnightly basis”.

It is unsurprising then that the department could not in its answering affidavit provide evidence that implementation could or would in fact occur from the “target” date.

On the contrary, on June 23, we conducted an urgent investigation of what is actually happening on the ground.

The fact is that for many pupils, the “target” to resume providing them with food in terms of the national school nutrition programme remains an empty promise.

In Limpopo, of the 45 schools contacted, none reported providing national school nutrition programme meals to learners other than the Grade 7 or 12 and none received any communication from the department to inform them that meals must be provided to all pupils.

In KwaZulu-Natal, of the nine schools contacted, five had no plan for the distribution of meals to pupils who have not yet returned to class.

In the Eastern Cape, of 15 schools that were contacted none fed learners in grades other than Grade 7 and Grade 12.

Against this background, it is regrettably still necessary for us to continue with our court action.

The department’s renewed assurance on paper that it intends the nutrition programme roll-out to generally begin on June 22 means little when promises have been consistently broken.

The department has not offered any defensible explanation of why Motshekga backtracked on initial public commitments and why schools, children and families have continued to do without.

Indeed, what is not in dispute is that the necessary funding is available to provide meals through the programme to all qualifying learners.

It is also not in dispute that, as a practical matter, it is possible to provide meals through the programme to all qualifying pupils, whether or not their classes have resumed.

It is apparent – although devastating – that a court order is necessary to ensure that the constitutional rights of children become more than words on paper.

Leanne Jansen-ThomasOP ED: Why we are going to court to force government to provide school meals02.03.2022