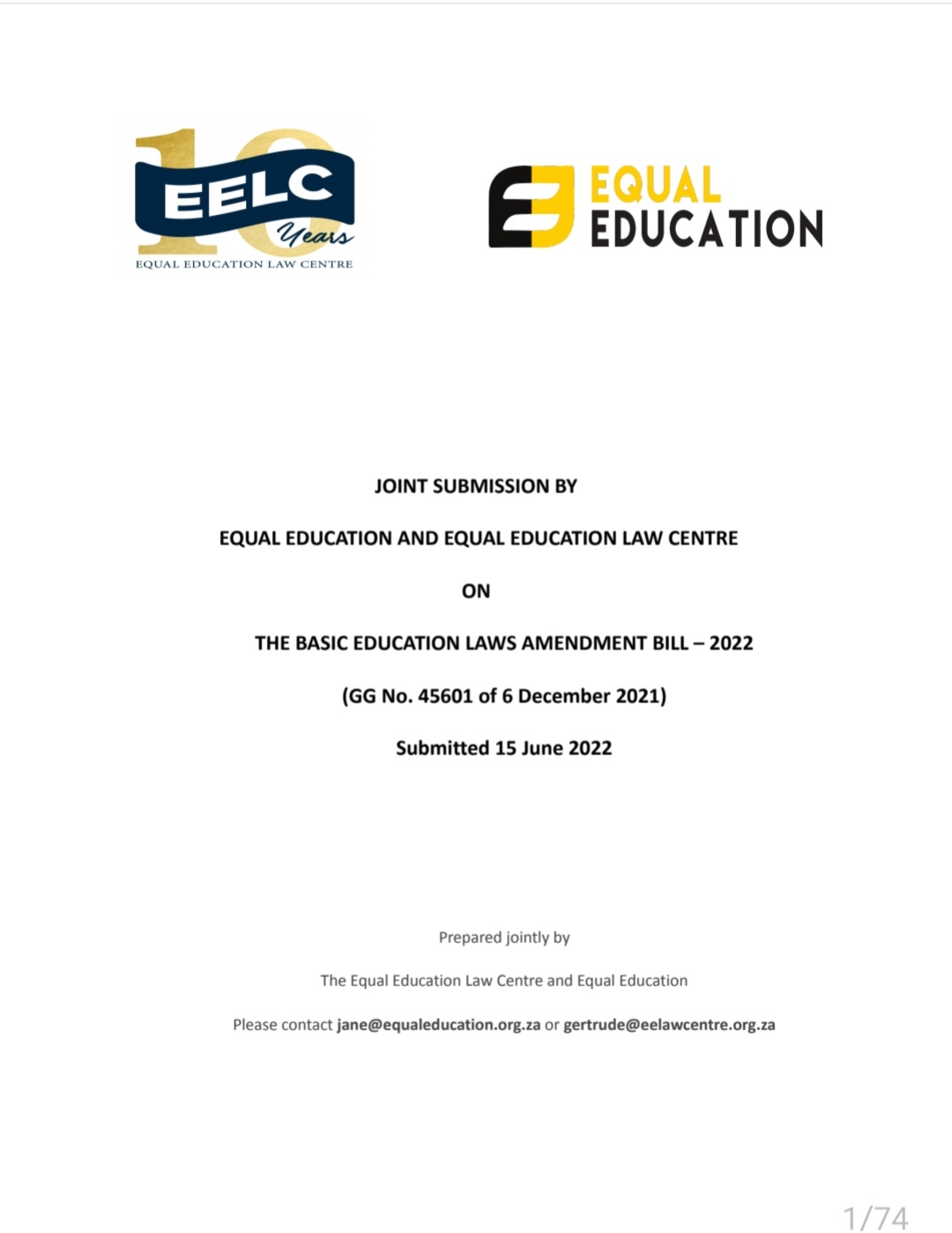 Joint media statement: Civil society calls for key changes to BELA Bill, as Parliament considers the biggest amendments to basic education laws in the past decade

The purpose of the Bill is to bring laws dealing with schools, namely the South African Schools Act (SASA) and the Employment of Educators Act (EEA), in line with the significant developments in the law over the last decade related to the right to basic education. As civil society organisations, we will be making submissions on what we believe are necessary changes to the Bill to ensure that schools have safe and workable policies that protect learners’ basic rights.

Among others, the collective has identified four key issues that the 2022 BELA Bill needs to address:

The 2022 BELA Bill proposes that learners must provide “required” documents with their application for admission to a school. If they can’t, they are referred to committees, which includes representatives from the Department of Home Affairs, South African Police Services, and the Department of Employment and Labour. Parents who submit false or misleading information and documents, or refuse to cooperate, can be put in jail, or given a fine, or both. The Bill also increases the potential jail sentence to 12 months. Despite the Bill stating that learners will still be admitted to school if they cannot provide the documents, these requirements are extremely troubling, and if passed could undo the ruling in the Centre for Child Law and Others vs Minister of Basic Education and Others court case, which guaranteed access to education for learners who do not have documents such as passports or birth certificates.

Criminalising parents/caregivers in this way is problematic, heavy-handed and not in the child’s best interests. The proposed amendment harshly penalises those parents/caregivers who are often desperate, vulnerable and invariably black and poor, who are seeking to get a better education for their children. It also harshly penalises families who are not South African citizens, who in many instances, despite repeatedly trying to stay in South Africa legally, simply cannot do so because of large backlogs at the Department of Home Affairs.

The establishment of the so-called National Intergovernmental and Provincial Intergovernmental Committees will not work because it does not address underlying problems at the Department of Home Affairs. The concern is also that the committees are being established for the purpose of immigration control, rather than helping learners with getting documentation.

We propose that the clause in the Bill on “required” documents as well as the clause that criminalises parents/caregivers for submitting false admissions information should be entirely removed, and that the committees must not be established.

The 2022 BELA Bill suggests an increase in jail time – from six to 12 months – for parents/caregivers, or any other individual, who prevents a child, who is within the age of compulsory school attendance, from attending school without a good reason. If convicted, a person may be fined, jailed, or both.

We feel that this will not help tackle the real reasons why children are staying away from school, such as poverty. Instead, this amendment makes parents/caregivers vulnerable to criminal charges against them and will perpetuate the circumstances that prevent learners from attending school. This will also predominantly impact women, who are often the primary caregivers in South Africa.

The 2022 BELA Bill also states that any person who unlawfully and intentionally interrupts, disturbs, or prevents school activities can be fined, jailed for up to 12 months, or both. We believe that this is too broad and has the potential to be used to prevent or penalise other constitutionally protected rights, including the right to protest. This type of criminal conduct is already dealt with under other laws.

We call for the criminalisation of both of these actions, keeping children away from school and stopping school activities, to be removed completely from the 2022 BELA Bill.

We are deeply concerned by the clause in the 2022 BELA Bill which would allow for alcohol to be sold and consumed at schools, and during school activities that are held both on and off the school premises. While the 2022 BELA Bill forbids the possession, sale and consumption of alcohol during school hours, we firmly believe that this proposal will still harm learners. Alcohol abuse is a big problem in many communities across the country and to protect learners from interactions with those under the influence, as well as from consuming alcohol themselves, schools need to remain alcohol-free spaces. These concerns are backed by research that has identified access to alcohol in communities as being heavily linked to crime and school violence.

We strongly urge that this proposal be completely removed. Alternatively, should the decision be taken to not completely remove it, alcohol should at the very least not be consumed or sold at activities where learners are present.

The number of learners dropping out of school in South Africa is a crisis, which has been made worse by the COVID-19 pandemic. Before the pandemic, it was reported that 40% of learners dropped out before reaching Grade 12.

The 2022 BELA Bill includes a clause that would place the duty of monitoring and encouraging school attendance on teachers, school principals, and SGBs. We believe that to effectively deal with learners dropping out, the responsibility should not be placed on individual schools alone to track these learners and to intervene.

The 2022 BELA Bill includes important changes related to the powers of school governing bodies (SGBs) on admissions and language policies, and now requires disclosure of financial interests. Rather than being new, these changes bring the law in alignment with what the courts have already confirmed about the relationship between SGBs and provincial education departments. The changes proposed by the Bill provide greater opportunity to pick up and prevent discriminatory practices at schools, while keeping important input by SGBs in these processes.

On admissions, the Bill clarifies that the HOD of the provincial education department has the final authority to admit a learner to a public school. The 2022 version of the Bill has added a welcome amendment which requires the HOD to consult with the SGB before making such a decision, as well as giving the SGB the right to appeal. We also welcome the additional factors that the HOD must take into account when considering the admissions policy of a school, such as the efficient and effective use of the State’s resources, as well as the shortening of the time period in which a decision must be made during the appeal process.

Currently SGBs have the ability to determine the language policies of their own school. The 2022 BELA Bill, in an attempt to try and prevent discriminatory languages policies, requires the HOD to approve and provide oversight of the decisions of SGBs on language polices. Despite these positive reforms, there still remains potential for schools to continue using language policies to justify racist practices by turning learners away on the basis of language.

We recommend that the 2022 BELA Bill makes it explicit that language policies shouldn’t be used to automatically exclude learners from a particular school, but instead, should be applied by the provincial HOD when making a final decision about admissions at that school.

The 2022 BELA Bill also seeks to strengthen accountability of SGBs by mandating that an SGB member must disclose their and their immediate family’s financial interests.

We welcome this amendment, but recommend that any existing and known relationships between an applicant in a tender or procurement application and any SGB members must also be disclosed during the application process.