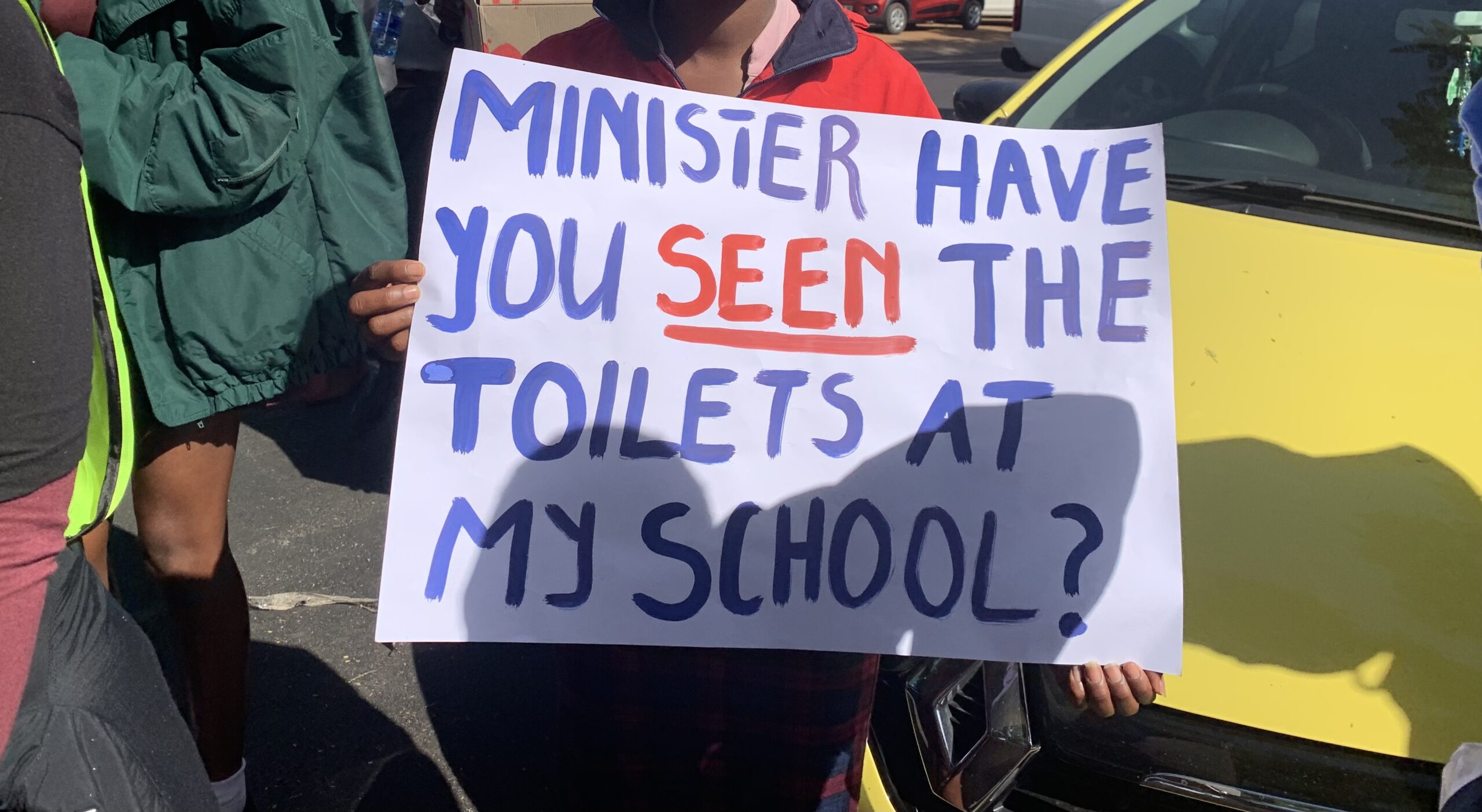 Basic Education Minister Angie Motshekga has put forward drastic and unacceptable proposed changes (draft amendments) to the Norms and Standards for Public School Infrastructure (the school infrastructure law). The proposed changes, which were published in the Government Gazette on 10 June, can be read here. The document has not been published on the Department of Basic Education (DBE) website or on its social media platforms.

The scariest change that Minister Motshekga wants to make to the school infrastructure law is to totally take out the deadlines by when the government must get rid of pit latrines and provide basics such as water, electricity, classrooms, fences and libraries. Without deadlines that are written into law, learners and teachers could be waiting another 10 or 20 years for their schools to be fixed! Without the legally binding deadlines, how can learners, teachers and parents hold the education departments accountable to fulfil their legal and moral duty?

The deadline for when feedback on the proposed changes must be submitted to the DBE is 10 July 2022! This is far too little time for school communities to properly participate in a process that will affect them so drastically. Added to this, the draft amendments document is written in a way that is difficult to understand, which makes it difficult for learners, parents and teachers to give their crucial feedback.

Equal Education (EE) and the Equal Education Law Centre (EELC) wrote to the DBE last week about our concerns. We have urged the DBE to extend the deadline for feedback from the public to, at least, 30 July.

The court told Minister Motshekga to fix the gaps in the school infrastructure law, not water it down

After EE got Minister Motshekga to adopt the school infrastructure law in 2013, we went to court in 2018 to get her to fix some of the gaps in it. EELC represented us in that court case, which we won (read the judgment here).

One of the gaps that we asked the court to get Minister Motshekga to fix was around the reports that provinces must submit to Minister Motshekga explaining their progress and plans in fixing schools and building new schools. We asked the court to get Minister Motshekga to make the reports available to the public once she received them. It is a victory that the changes to the law that Minister Motshekga is now proposing include that the infrastructure progress reports from each MEC must be published on the websites of the national and provincial education departments. However, her changes to the law also propose removing the guidance about the details that should be in the reports including the size of the existing infrastructure backlogs and how much money the Education MECs use to eradicate them. Without this, the contents of the reports will be different from province to province. There is no guarantee that the information that will be in the reports will be helpful for school communities to verify the progress being made, and to hold the Education MECs accountable!

Another reason that we went to court in 2018 was to get what we called the “escape clause” to be removed from the school infrastructure law. The escape clause says that our schools can only be fixed if there is cooperation and resources from other parts of government (such as the Treasury and municipalities) or Eskom. The court agreed with us and declared that the escape clause in the law was “unlawful and invalid”. The proposed changes to the school infrastructure law by Minister Motshekga should align with what the court said. However, the DBE is still trying to avoid being held accountable by not removing the wording in the law that says that the DBE must “as far as practicable” make sure that the different parts of government play their part in delivering school infrastructure.

We also went to court in 2018 to get the court to declare that the wording of the school infrastructure law, which forces the education departments to only fix schools made “entirely” of inappropriate materials (mud, wood, asbestos, zinc) as unacceptable. The court said the law should include that all “classrooms built entirely or substantially” of inappropriate materials should have been rebuilt by 2016. This means that a school may not have one or two brick buildings, with the rest of its classrooms made of inappropriate materials. The changes that Minister Motshekga is now proposing making to the law are exactly what the court said. This is an important victory!

A strong school infrastructure law is crucial for progress

Minister Motshekga adopted the school infrastructure law in 2013 because of years of tireless campaigning led by EE members (learners, post-school youths, teachers and parents), supported by legal action. Never before did South Africa have a law that says what basic infrastructure a school must have, and by when that infrastructure must be provided.

Although very slow, there is definite progress in government’s delivery of safe and proper school infrastructure. According to the DBE’s data (the National Education Infrastructure Management System NEIMS), in 2013, 45% (10 915) of South Africa’s then 23 909 public schools had plain pit latrines as toilets, 12% (2 925) had no electricity supply and 7% (1 772) had no water supply. Nearly a decade later, according to the 2021 NEIMS report, the number of schools with plain pit latrines has halved, only 90 schools are completely without electricity, and no schools are completely without access to water.

Without the urgency and accountability that is demanded by the deadlines in the school infrastructure law, poor and working-class communities will never know when their schools will be fixed. EE and EELC strongly encourage parents, teachers, learners and other education stakeholders to make submissions to the DBE on the challenges that they identify with the proposed changes. The current closing date for public submissions is 10 July 2022.