Gauteng Equalisers (Equal Education learner members) have long spoken of the significant challenge that overcrowding in schools has on their ability to learn and on the ability of teachers to teach.

Between September 2019 and June 2020, taking our mandate from our learner members, Equal Education (EE) decided to research the causes and effects of overcrowding in Gauteng schools.

We chose a sample of nine schools (primary and secondary) based in Etwatwa, Ekurhuleni. We collected data on 751 classes. We measured and inspected 105 classrooms. We interviewed 51 community members. We also got insights from Equalisers, government officials, academics and researchers from civil society organisations.

Read our #NoSpaceForUs research report titled, “No space for us – Understanding overcrowding in Gauteng’s schools” here.

Historically, overcrowding has been thought of as when a class has more than a certain number of learners in it (many people we interviewed thought 35 learners in a class was too many), and that this is caused by either having too few teachers or too few classrooms.

In reality, overcrowding and its causes are a little more complicated. A class is a group of learners who learn together for a specific subject. A classroom is the physical building space in which lessons take place. While a large number of learners in a class usually leads to overcrowding, we have to look at learner numbers in relation to the number of teachers and the amount of infrastructure a school has, such as furniture and classrooms. Other factors that need to be considered include how many schools are in an area, how quickly populations that learners come from grow, and how learners are spread across schools based on which schools they and their parents/guardians believe are best for them.

The Post Provisioning Norms (the PPN), which are the norms that determine how teaching posts are distributed between schools, refer to ideal maximum class sizes which vary depending on the grade and subject taught.

We used the highest maximum ideal class size, 40 learners to one teacher, as an indication of a class being too big. We also looked at whether the classrooms were at least 48 metre squared (the minimum classroom size according to the School Infrastructure Norms) to determine whether a classroom building was too small for the number of learners it held.

EE’s research into the conditions at the nine schools in Etwatwa showed that:

When comparing the situation we witnessed in schools with the statistics reported by the Gauteng Department of Education (GDE) and the Department of Basic Education (DBE), we learned that the measurements used by the government do not reflect the reality in schools.

GDE/DBE statistics and measurements showed that of the nine Etwatwa schools:

These statistics are used by the GDE to claim that – while there is a classroom shortage – schools have enough teachers, classes are the right size, and schools are generally not overcrowded! It is concerning that the DBE/GDE’s measurements do not reflect the reality of overcrowding in Gauteng schools because these are the very same measurements that are used by the GDE to determine which schools need which resources and how many of those resources they need!

What are the causes of overcrowding?

A school is overcrowded when the number of learners grows so big that learners’ ability to learn and teachers’ ability to teach effectively is limited.

A school becomes overcrowded when it has too few teachers and/or not enough infrastructure to serve the number of learners that are enrolled. In some cases a school also becomes overcrowded because it is unable to adapt to having more learners in the way that it thinks is best, without suffering the consequence of losing the resources it already has.

Firstly, the GDE’s budget determines how many teachers the GDE will hire for the entire province. However, there is a worrying trend of basic education funding being deprioritised by the National Treasury. On the national level, the percentage of the total government budget that is spent on basic education has been steadily decreasing since 2016/17. The money that the basic education sector is given by National Treasury will be cut even more in the future. Provinces are negatively impacted by the National Treasury’s austerity budgeting approach – in 2019, the DBE estimated that, in the next few years, Gauteng’s education budget will be reduced by R9.8 billion. This is expected to have a big impact on how many teachers Gauteng is able to hire.

Secondly, the GDE tries to meet the ideal maximum guidelines set out in the Post Provisioning Norms (PPN) – the PPN are the norms that determine how teaching posts are distributed between schools. The GDE aims for the ideal learner-teacher ratio, with the highest maximum ideal being one teacher for every 40 learners in a school. But the learner-teacher ratio is not a good measurement of what class sizes are because it does not take into account that classes are often split up unevenly. It also assumes that teachers are teaching all the time, but this is not the case. Teachers are required to complete administrative tasks, such as marking and lesson planning. Also, if there are exactly the right amount of teachers for the number of learners at the school, it means that there are no extra teachers to help, for example, when another teacher is absent or a learner is ill and needs to be taken care of. This is made worse by many under-resourced schools not having enough support staff (who are not teachers) to assist with the daily running of a school.

To summarise, a school may have an overall learner-teacher ratio of 1:40 but in reality, when looking at actual classes (for example, an isiZulu class or a history class) it may in fact be overcrowded. Yet the DBE/GDE’s simplified measurement that is used to measure a teacher shortage will not pick this up. The shortage of teachers at schools is also because of the unequal distribution of teachers between schools in the province. The PPN claims to distribute teachers equitably, but in reality, some of the factors that it uses to determine the allocation of teachers have many problems when we put them into practice. For example, a learner with special needs is counted as more than one learner because they need more teaching support. It is good to take this into account because it enhances equity. However, in reality, the special needs of these learners can only be considered if they are assessed by a healthcare professional – something which many schools (and parents/caregivers) in poor and working class communities cannot afford to do. The only measure in the PPN that is truly equitable is the teaching posts aimed at poverty redress – this is when extra teachers are reserved and given to under-resourced schools. However, only up to 5% of the total number of teachers in a province can be set aside for posts aimed at poverty redress, and this is too little when considering the level of inequality between South African schools.

The Minister of Basic Education has not made norms and standards for school furniture yet. But, if the GDE/DBE measured whether schools had enough furniture, they would do so by comparing the total number of the chairs and desks in a school to the total number of learners. However, if a school has exactly enough chairs and tables per learner at that school, it means learners will need to drag desks and chairs to certain classrooms when popular subjects are being taught there.

Schools are also limited in their ability to respond to overcrowding in the way that they think is best – there is a lack of school autonomy. If, for instance, a school’s leadership turns away extra learners so that they can maintain manageable class sizes, they risk losing teachers and other resources. Why would this happen? A school’s learner to teacher ratio may be less than the ideal maximum (i.e. 1:40), and so the GDE might argue that they have too many teachers. In this way, schools are encouraged to accept more learners than their buildings can hold so that they can get more teachers. School governing bodies can set limits for how many learners can be enrolled, but they do not have the final say which means they may be forced to accept more learners when no other school can be found for learners.

What are the effects of overcrowding?

Overcrowding negatively impacts the ability of teachers and learners to create an effective learning environment.

There are negative environmental effects, such as:

Teachers have workloads that are too heavy, resulting in them being overwhelmed, exhausted and losing confidence and motivation. Learners feel neglected and withdraw from learning.

These are just a few examples of the many negative effects that overcrowding in schools has on teachers and learners.

1. The DBE should develop school capacity norms that are binding

School Capacity Norms need to be developed and published by the DBE, that are binding – meaning that they are not just an ideal but that the provincial education departments are forced to implement them. School Capacity Norms would set a limit for the number of learners a school can enroll.

When determining what the maximum capacity of a school is, certain factors must be considered. These factors include:

2. The GDE needs to create an infrastructure plan that is forward looking

The GDE needs to create and implement a plan for school infrastructure development that aims to fix the current overcrowding, and to prevent future overcrowding in schools.

This plan must very clearly take into account population growth in areas where learners come from, the rise in learner migration to Gauteng, and must include plans for the enrolment and transportation of learners who struggle to find a space at schools.

3. The GDE must prioritise spending money to fix overcrowding

The GDE must spend its money in a way that prioritises putting an end to overcrowding. To do this, it must first identify which schools are overcrowded by taking into account all the various aspects of overcrowding together, including:

4. Teachers and support staff must be placed in schools where they are needed most 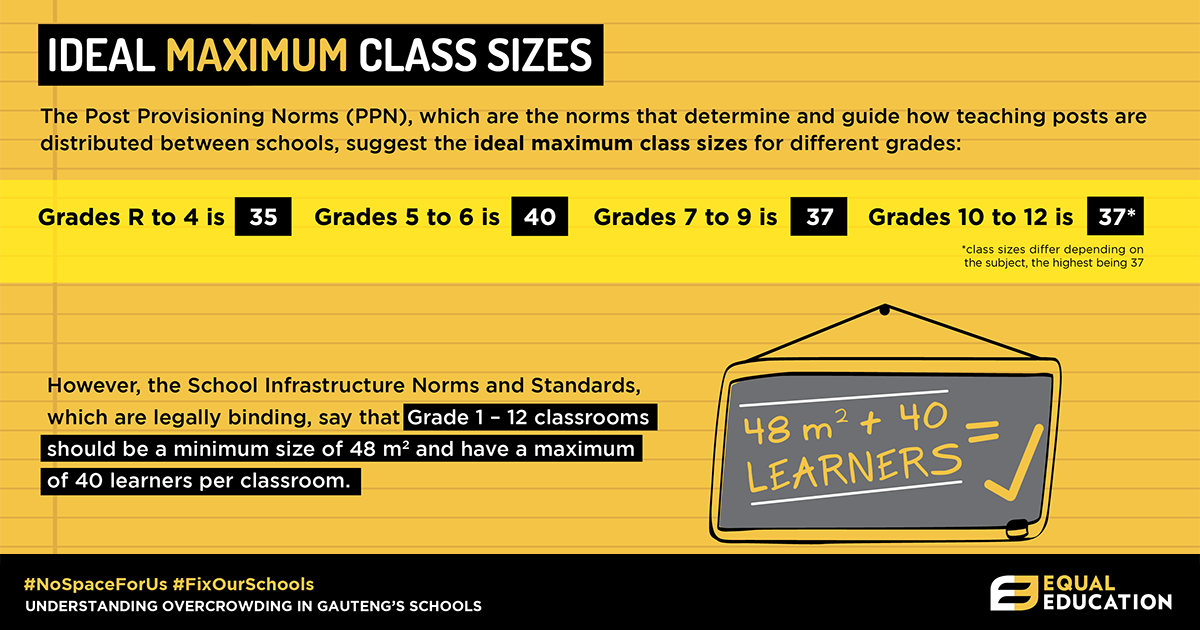 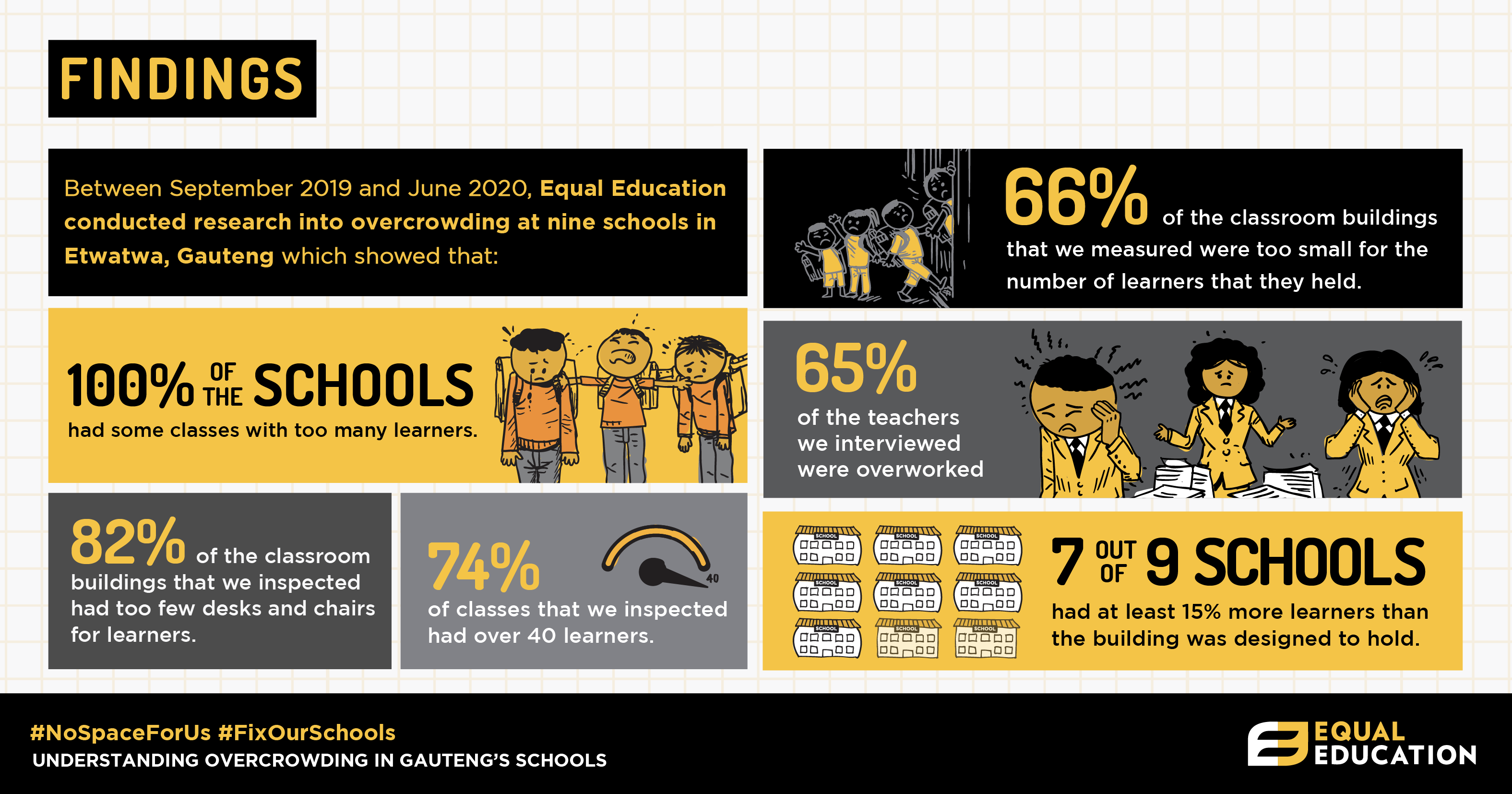 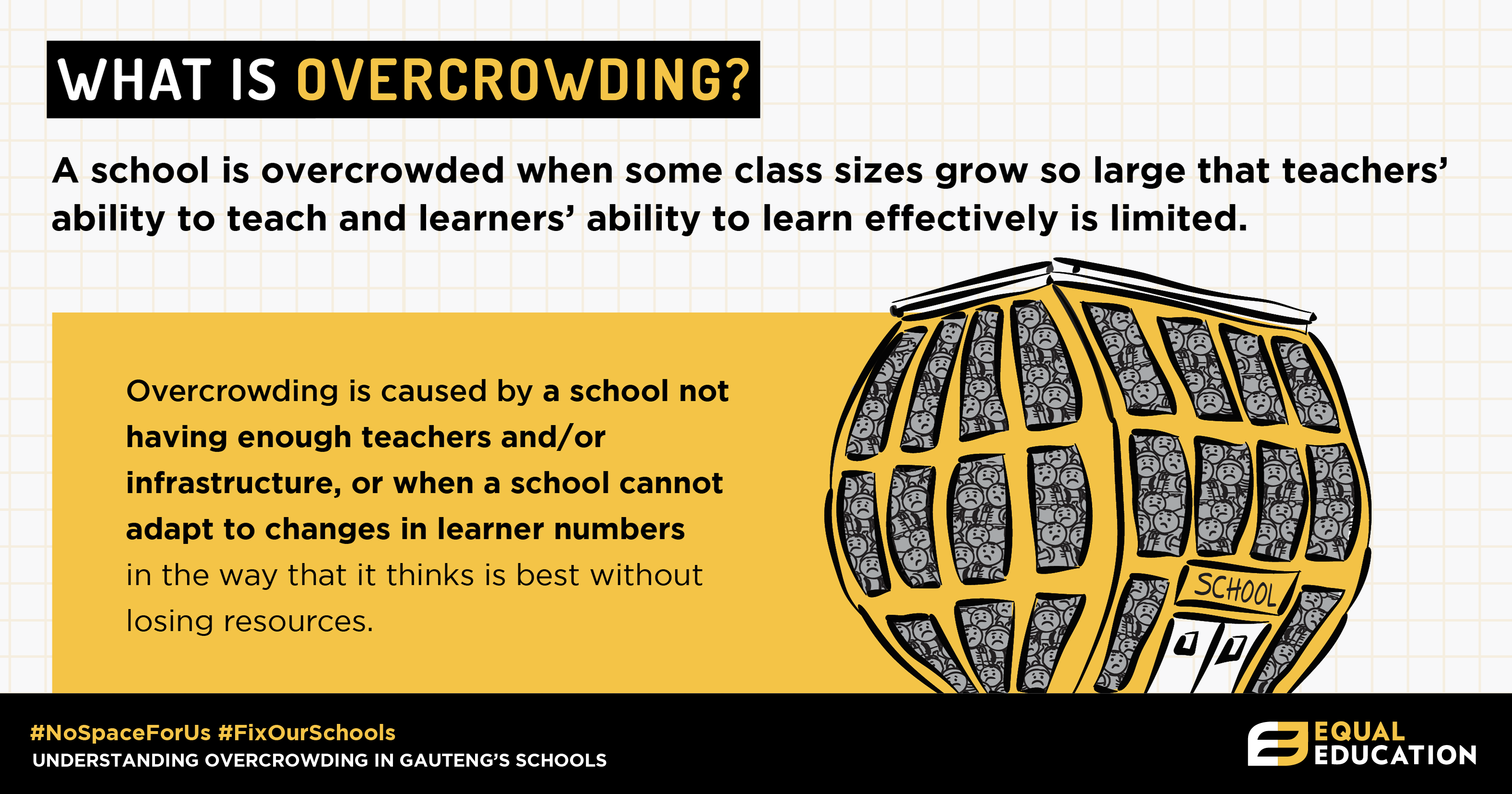 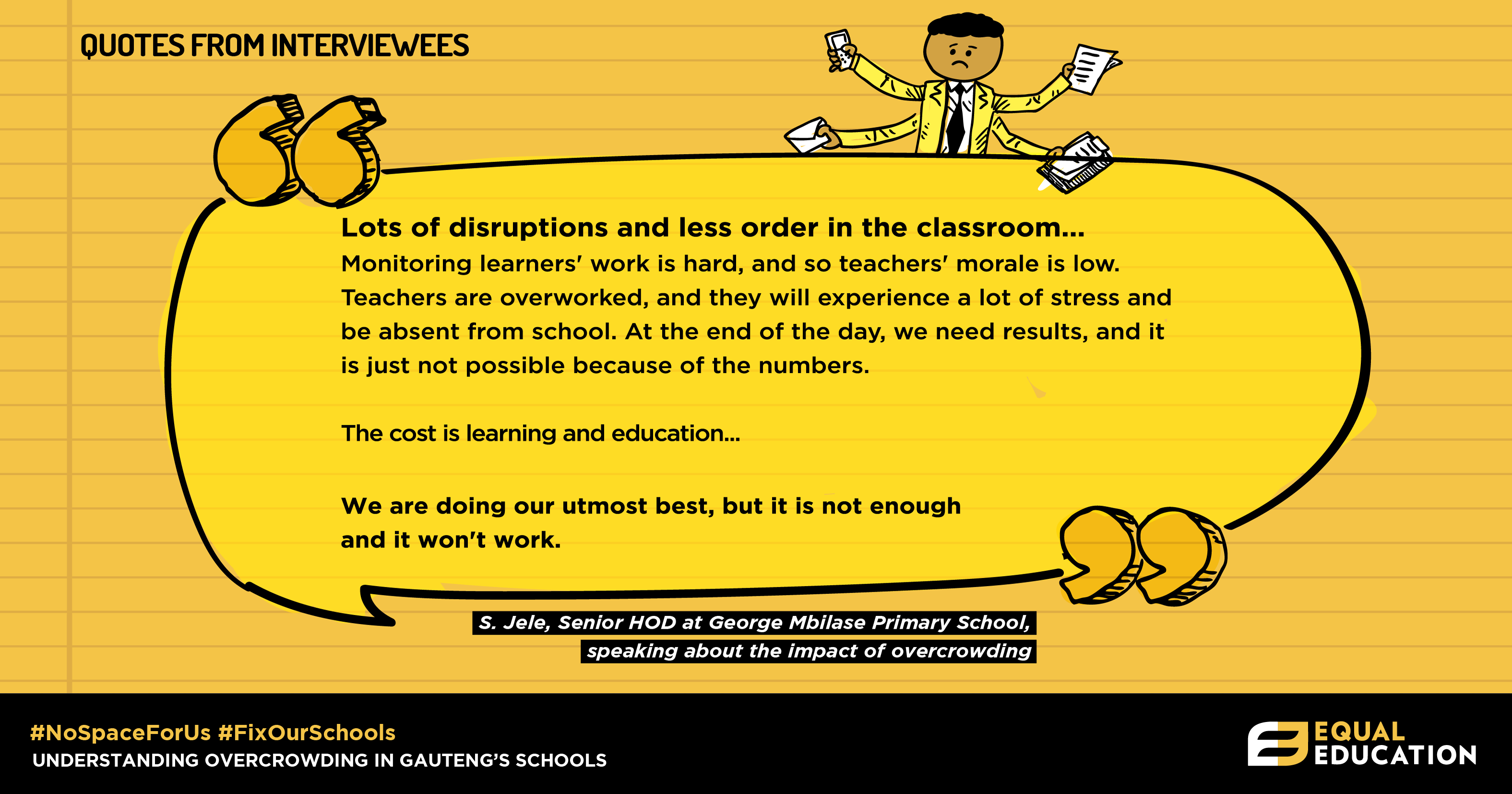 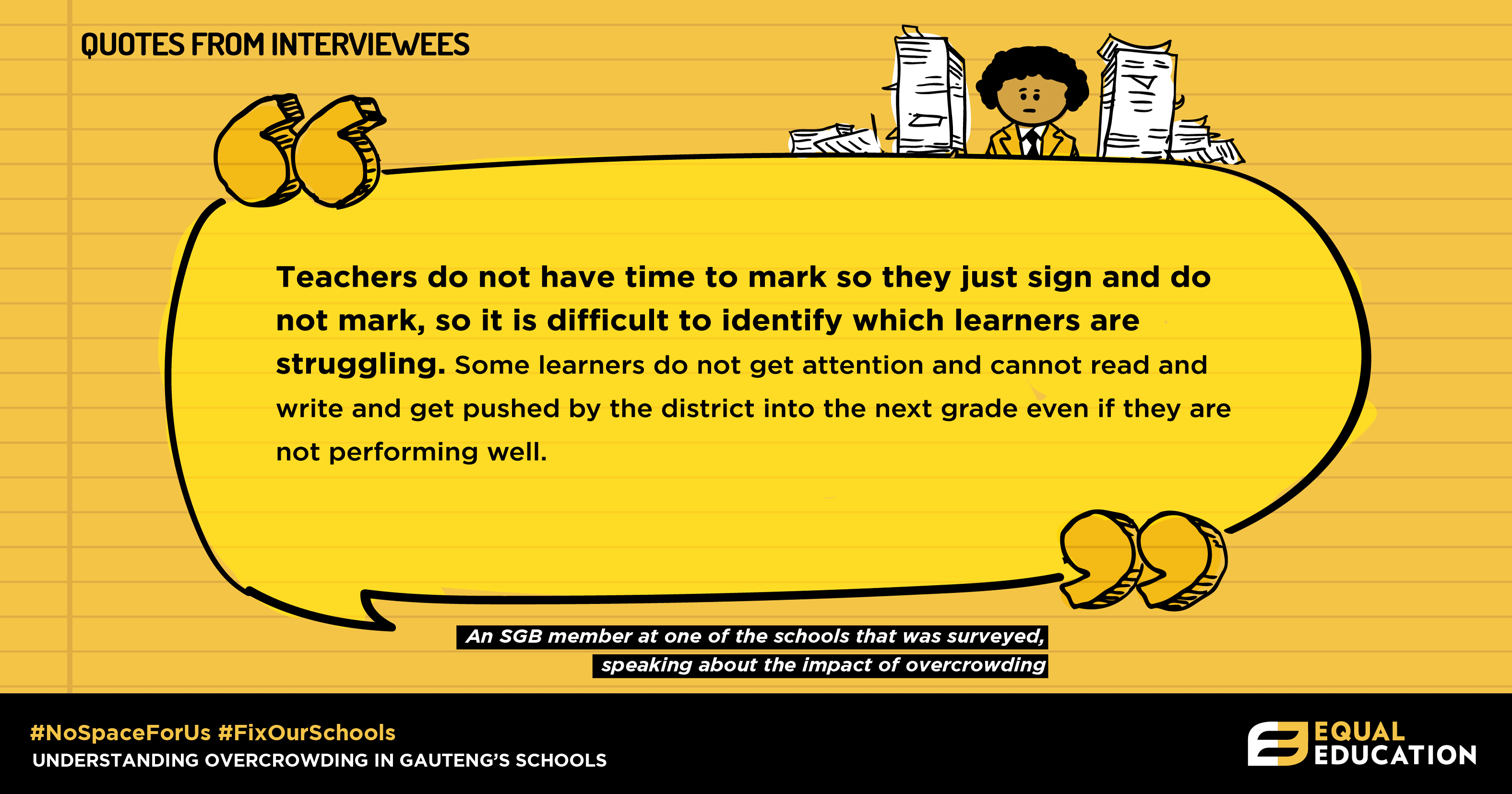 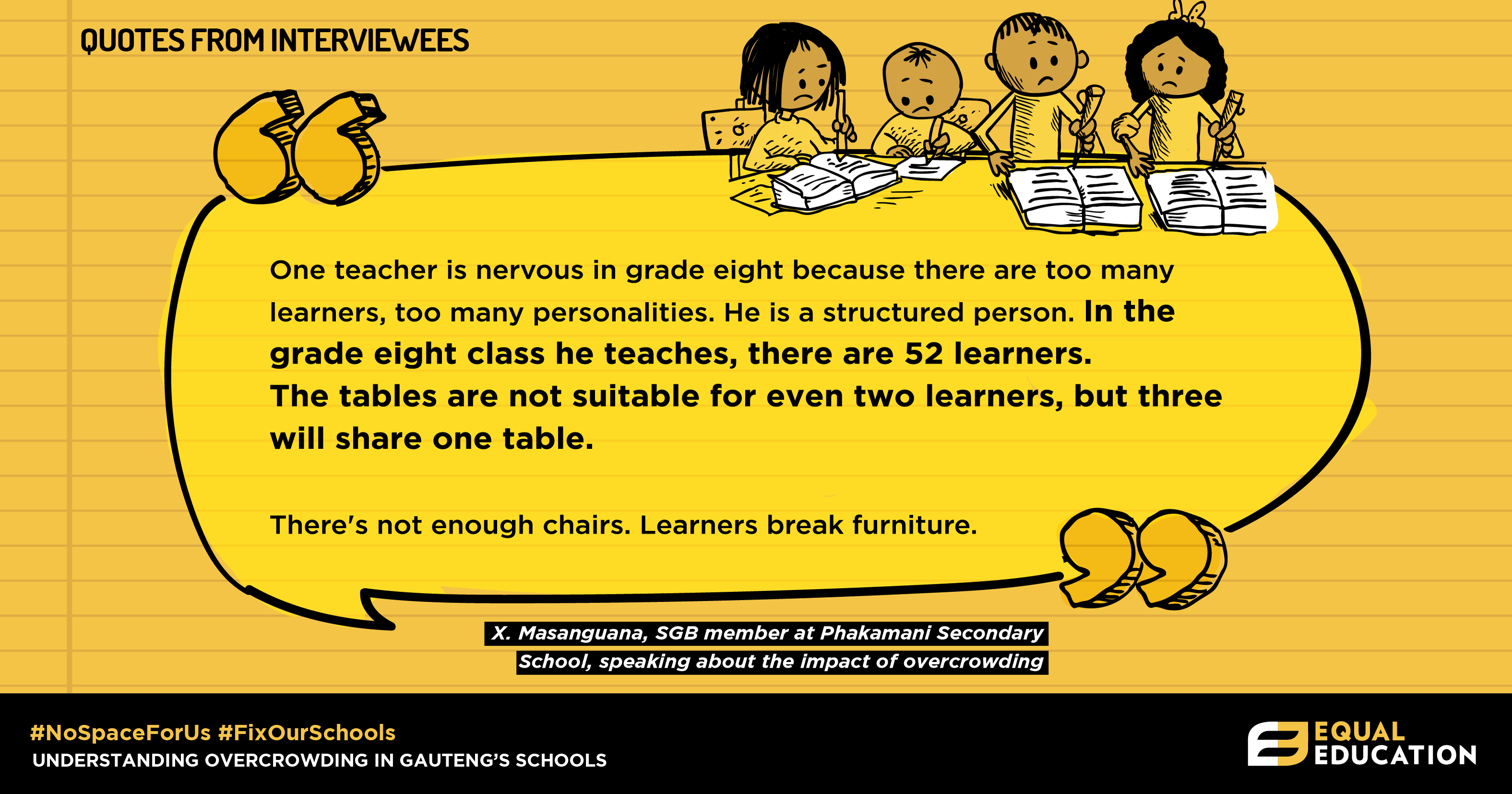 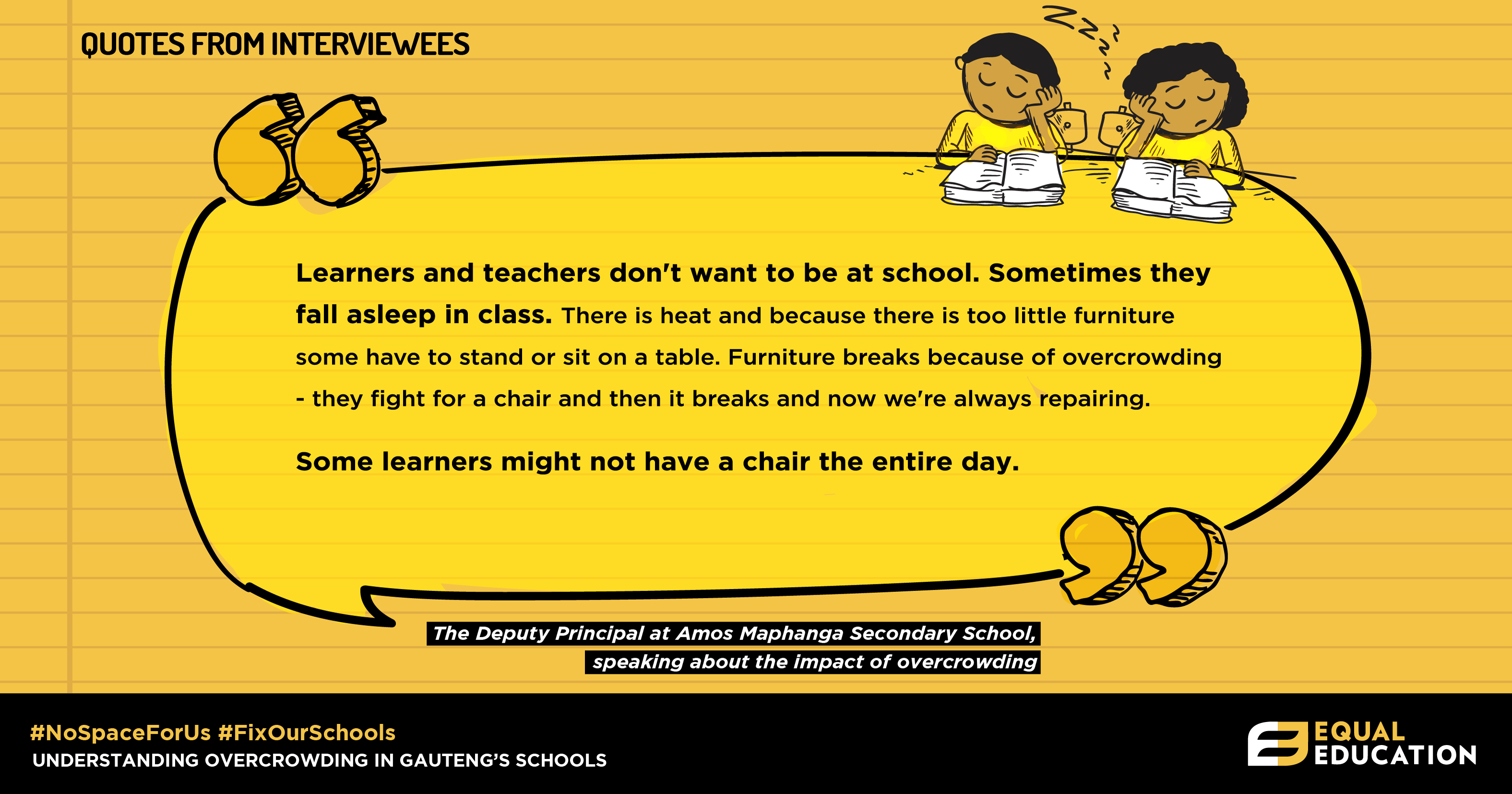 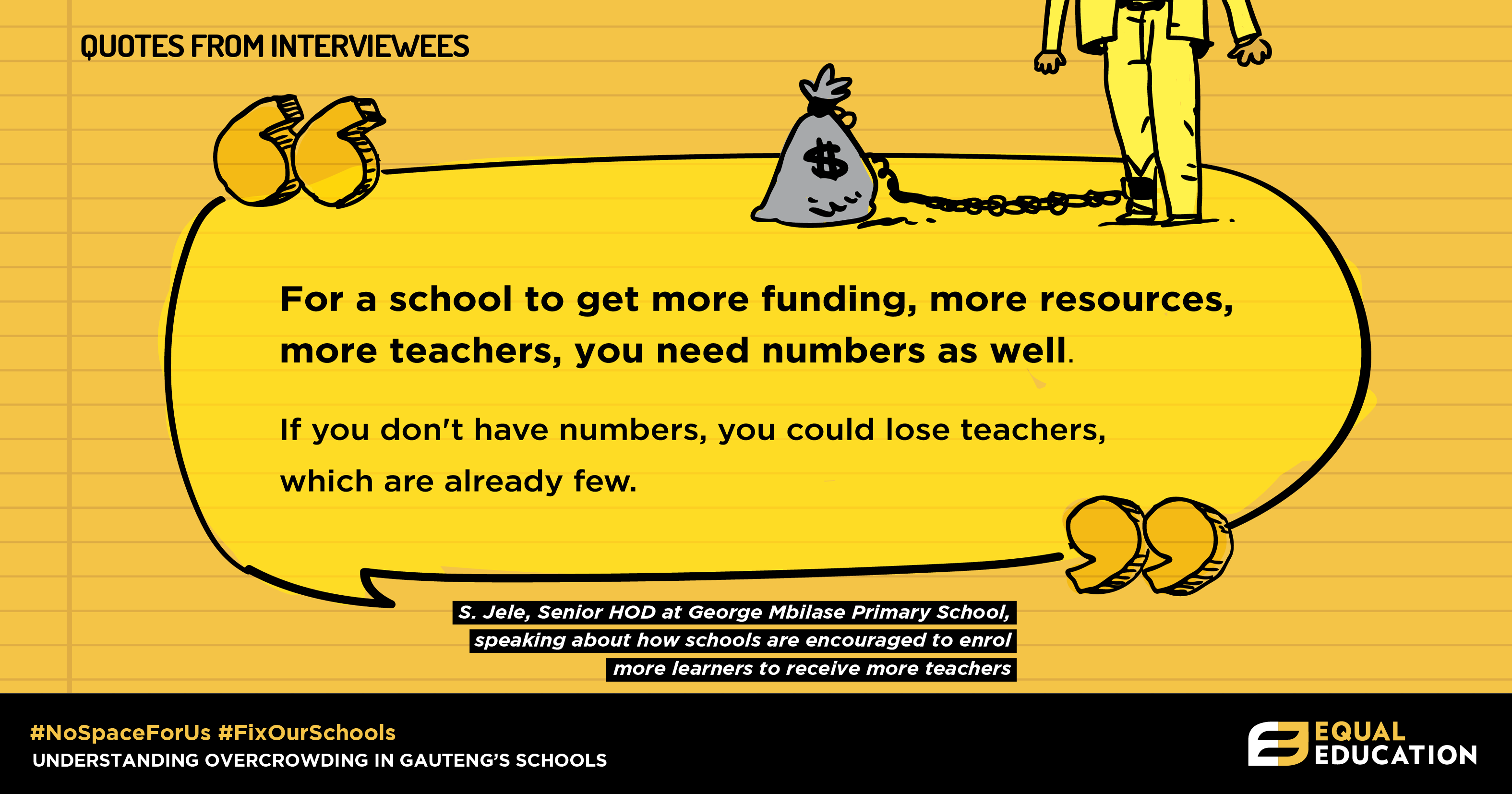 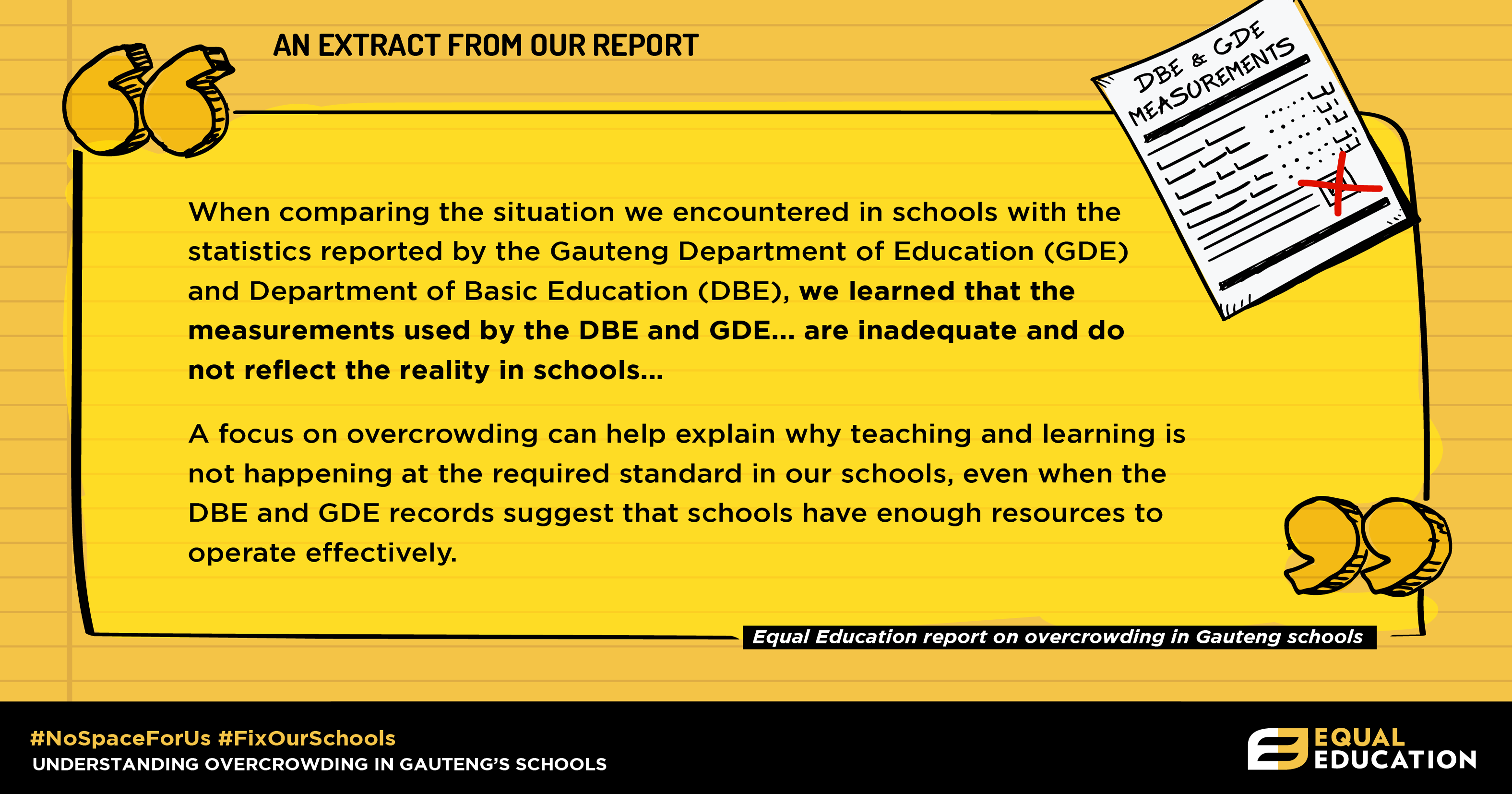 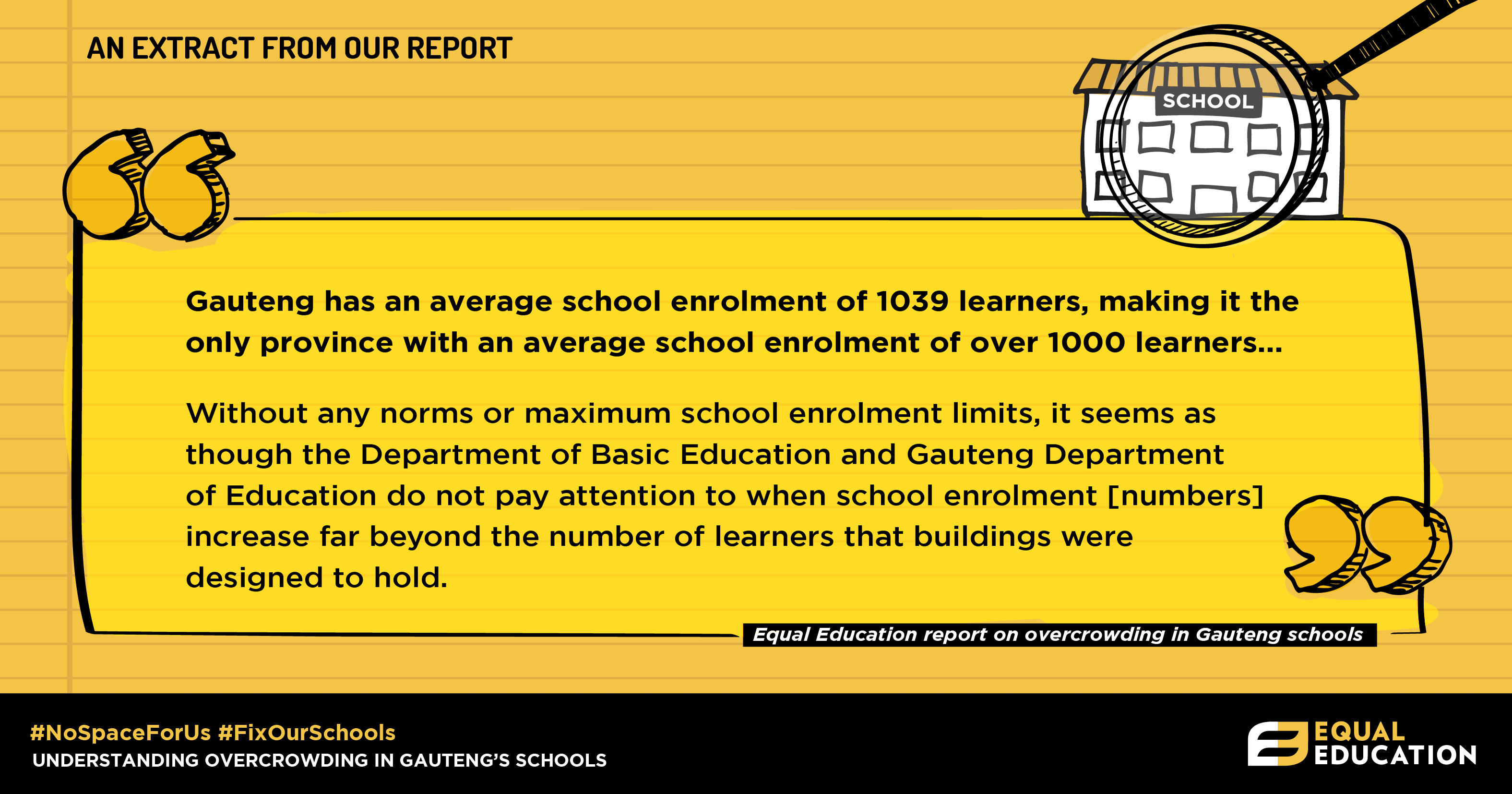 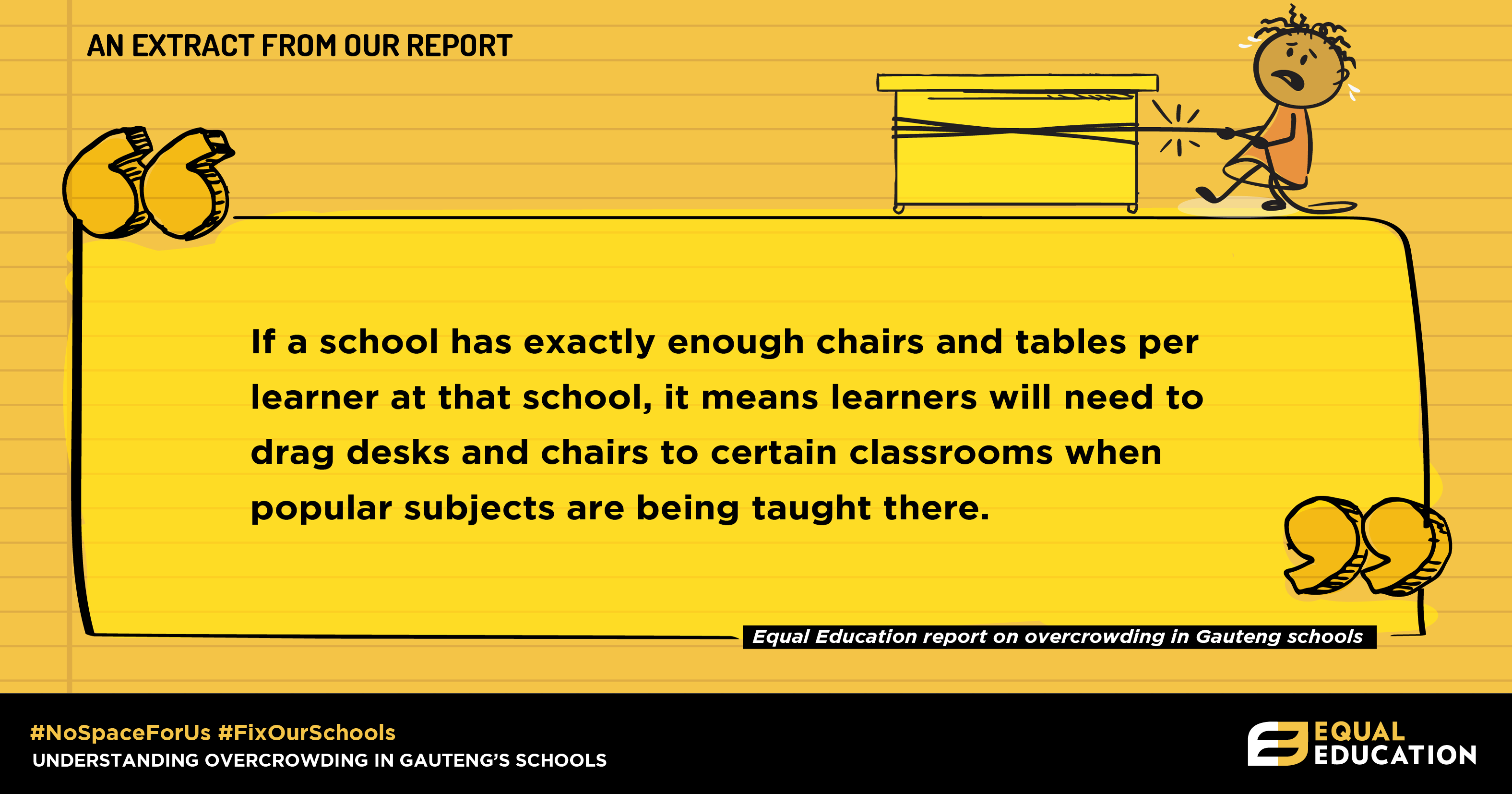 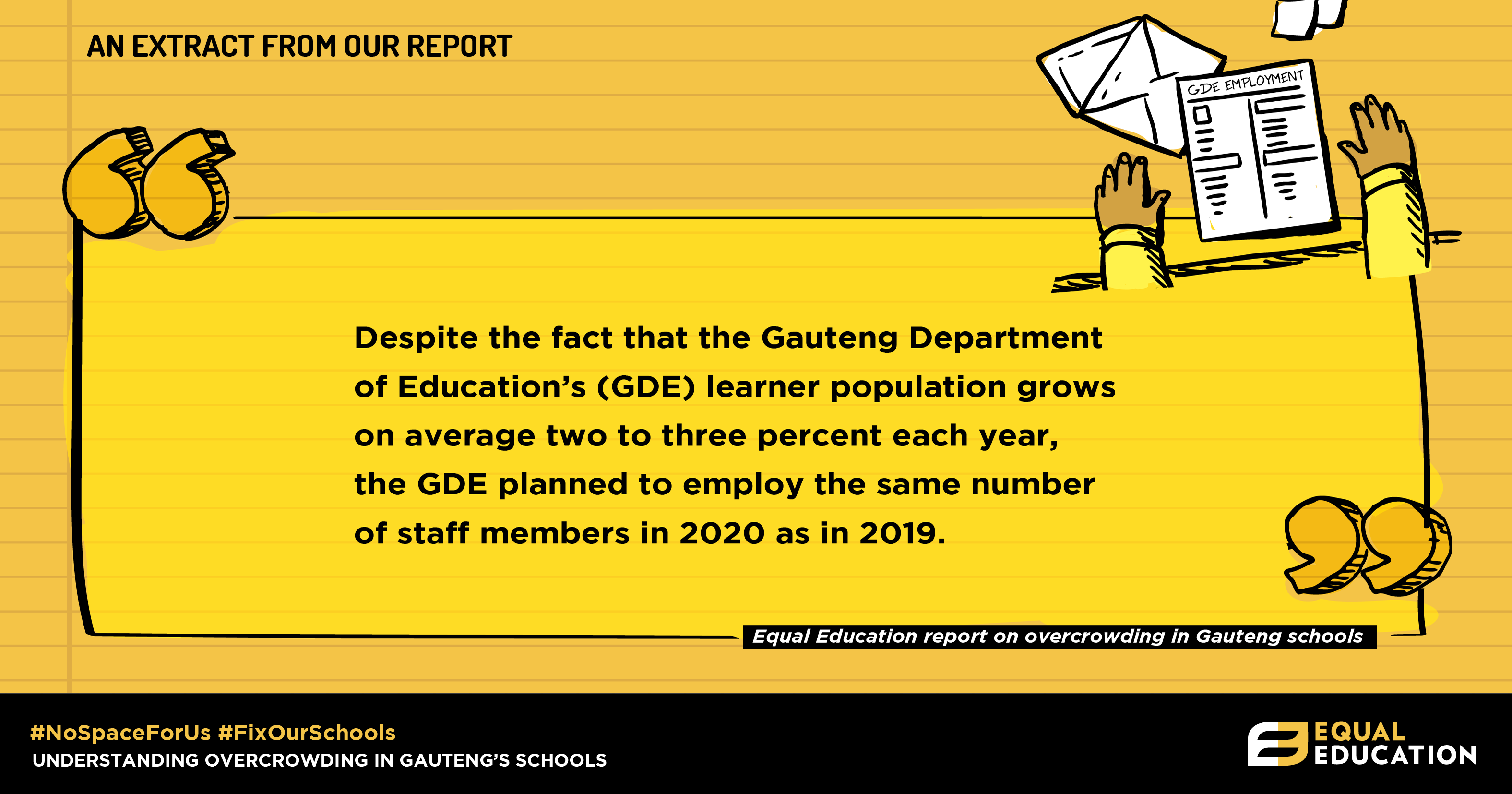 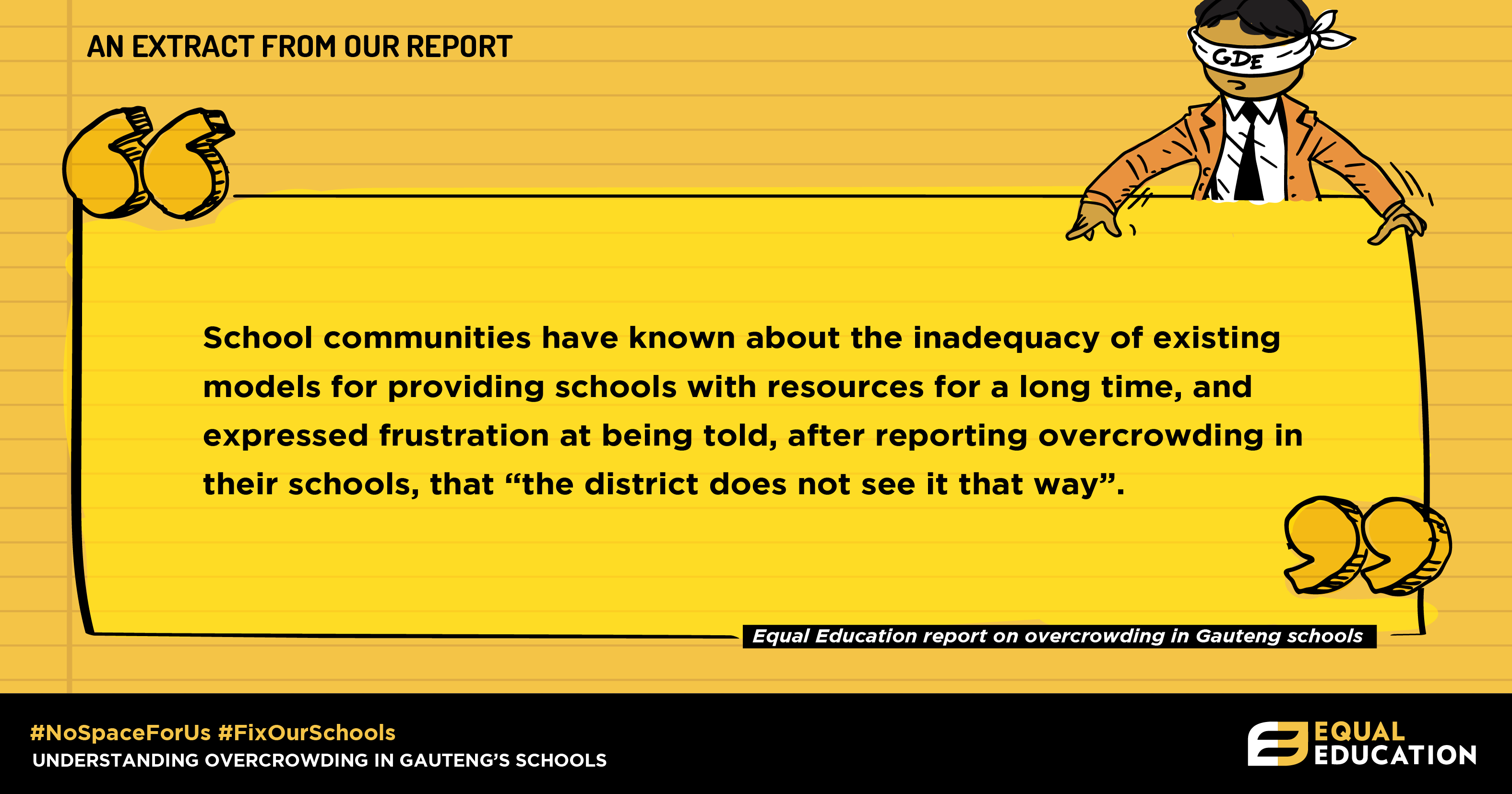 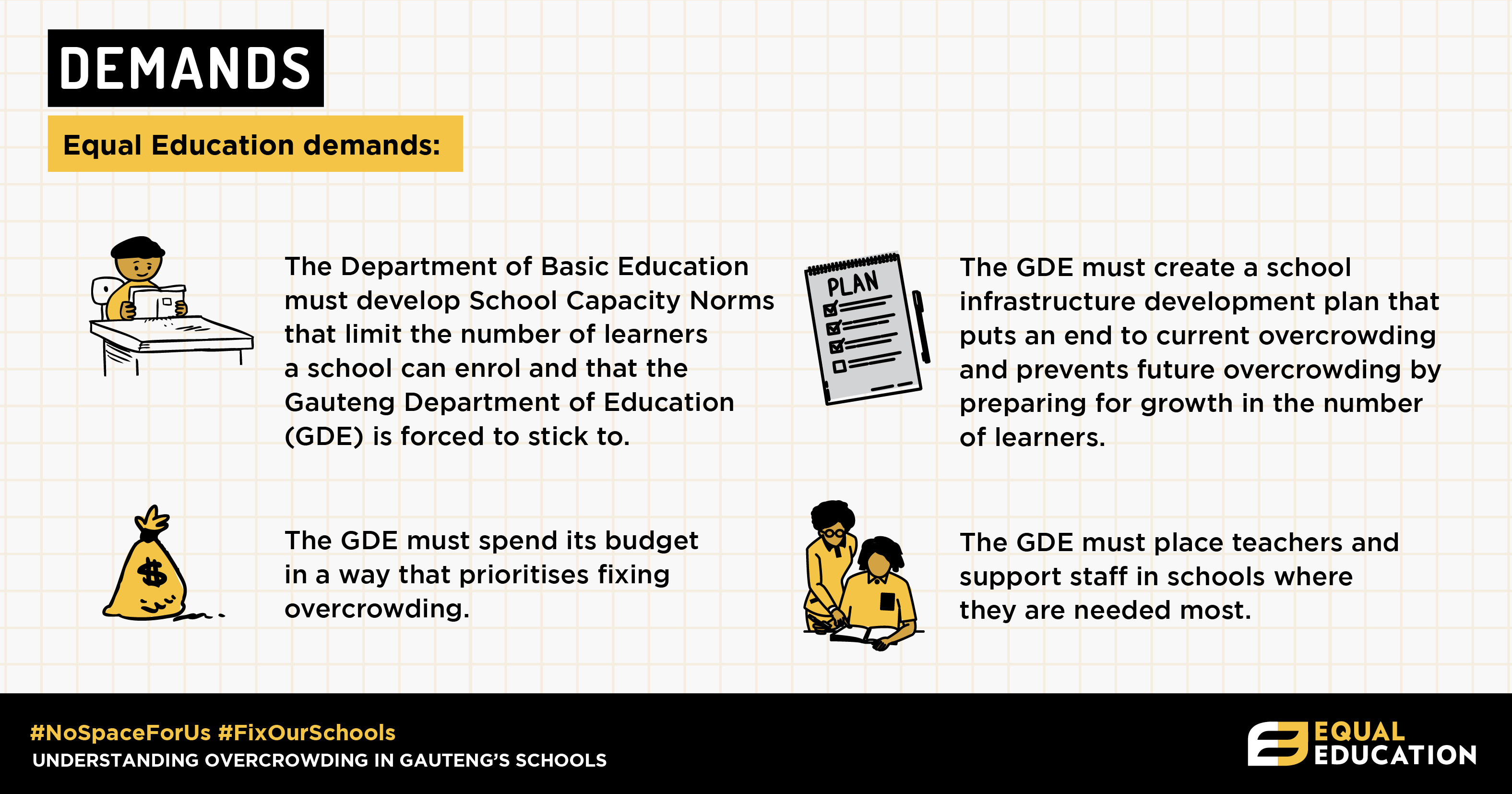