Equal Education (EE) has been involved in the struggle for access to scholar transport in KwaZulu-Natal (KZN) since July 2014, when members of the organisation based in the Nquthu area raised it as a serious barrier to their education.

In January 2015, EE and the Equal Education Law Centre (EELC) visited schools in Nquthu. We spoke to teachers and principals who complained of having to teach learners who were hungry and exhausted after their long walk to school, and who struggled to concentrate or stay awake in class. They attributed high incidences of late coming, absenteeism, and learners dropping out of school to the lack of scholar transport. Some described how school attendance was as low as 5% to 10% on days of heavy rains or lightning storms, particularly during the summer rainfall season. The teachers and principals also said it was difficult to provide extra lessons after school when learners still had to make the long journey home.

At the end of our visit, we met with the director of the Umzinyathi education district, under which Nquthu falls, who informed us that only 15 out of the more than 500 schools in this district were currently provided with scholar transport, due to a lack of budget.

Upon our return an article was published in the Mail & Guardian documenting our trip and the plight of learners without scholar transport.

With thorough research, we found these to be the facts around scholar transport:

On Thursday 9 April 2015, 500 EE members from Nquthu marched to the KZN Department of Education’s office in Pietermartizburg to demand scholar transport. The learners, like many others in rural areas, have to walk long distances of up to 24km  a day to get to and from school.

We marched because we had met and corresponded with the KZN government about these issues on more than one occasion. We wrote in February and again in March. We received replies from both the departments of Education and Transport, but these were not satisfactory to meet the rights of learners. At the march we put forward the following demands: The provision of scholar transport to the schools in Nquthu, who are in urgent need of this service.

2. The proper implementation of the KZN Scholar Transport Policy and a much greater budget to be allocated towards this programme in the province.

On 23 October 2015 after sustained correspondence with the Minister of Basic Education, and under the threat of litigation by EE assisted by the EELC, the National Scholar Transport Policy was finally published, providing a platform to ensure that learners no longer walked long and dangerous distances to and from school.

After months of advocacy, campaigning, and legal interventions, learners at three Nquthu high schools have now been provided with buses to ensure they are able to access schools.

Members of EE and our lawyers from EELC have confirmed the provision of buses to the following schools:

Although this was great progress, we still found this to be unsatisfactory, EE had identified 11 schools in the Nquthu area that did not have access to scholar transport, despite repeated appeals. Learners at these schools have to contend with dangerous terrain, bad weather and violent attacks on the road. In some cases, learners walk more than 20km per day – a serious threat to their rights to access to education, health, safety and dignity.

We therefore, on 11 November 2015, released a press statement making the following demands:

On 22 January 2016, EE and EELC submitted a comprehensive analysis of the national policy to the national departments of Transport and Basic Education, highlighting the following key areas of concern:

·         The policy’s criteria for identifying beneficiaries of subsidised scholar transport is inadequate.

·         The policy does not provide sufficient clarity or coherent mechanisms for multi-stakeholder coordination.

·         The policy does not provide sufficient guidance on how planning for learner transport provision will take place.

·         The policy does not provide timeframes and deadlines for implementation.

·         The policy does not provide mechanisms to ensure adequate funding and budgeting.

The full analysis can be downloaded here: https://equaleducation.org.za/2016/01/25/national-learner-transport-policy-a-step-in-the-right-direction-but-not-far-enough/

Due to the inaction on the part of the DBE and the Department of Transport, EE decided to embark on further action.

On March 30th and 31st 2016, 300 members of Equal Education walked from New Hanover to Pietermaritzburg to demand the proper implementation of the national Scholar Transport Policy. The walk was attended by learners, parents and teachers and took place over two days.

The walk was intended to be symbolic of the long walk to school thousands of learners in KZN and many other provinces are subjected to.

We put forward the following demands during that march:

1.       We demand that there be emergency relief for the 11 schools in Nquthu that qualify for scholar transport.

2.       We demand the proper and full implementation of the national Scholar Transport Policy.

3.       We call on the provincial education department as well as the provincial Treasury to allocate sufficient funding for the provision of scholar transport. 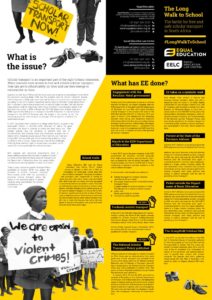 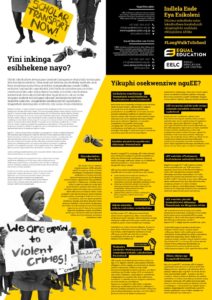